While searching for a recipe heavy on the coriander for this month's challenge, I came across Apicus chicken.  This brought back a whole lot of memories.  Michael and I once belonged to an historical society that did early medieval to late renaissance re-enactment.  A period feast was almost always a feature of their events and there were many accomplished cooks with a great interest in researching and redacting period recipes for their menus.  Apicus Chicken is one of these recipes.  It is a Roman recipe from a period cookbook written by Marcus Gavius Apicius.  This is a pretty close translation of the original recipe:

Directions
Start to fry the chicken and season with a mixture of liquamen and oil, together with bunches of dill, leek, saturei, and coriander.  Then cook in the oven.  When the chicken is done, moisten a plate with defrutum, put chicken on it, sprinkle pepper on it , and serve.

I needed to turn this recipe into something everybody could use.
I needed to define a few of the ingredients: liquamen, saturei, and defritum.  I also had to make a decision about the word coriander.  Depending where you are in the world coriander could mean the same thing as cilantro, the green herb.  Or coriander could specify the seed of cilantro.  My guess is, based on the other green herbs in the recipe, Apicius means the green herb we refer to as cilantro.  For the sake of the challenge I'm translating it as the seed.  Because I can.

I've run into liquamen before.  It's fish sauce.  And that's what I used, an Asian fish sauce.  I don't know if it approximates Roman fish sauce but I'm assuming for all intents and purposes that fish sauce is fish sauce.  I saw a number of other recipes that called liquamen a salty red wine.  Not sure where they came up with that but I did take a cue from it and used equal parts fish sauce and red wine in my redaction just to guard against over salting.

Saturei was translated in several recipes as rose petals.  That was just wrong.  A little experience from working with period recipes told me that rose petals would be overwhelmed and disappear they way they would be used in this dish.  It had to be an herb.  I pulled out an old herb chart I have that lists both common and Latin names and sure enough there it was:  Satureja hortensis, Savory.

Defrutum had me stumped so I checked in with the cooks/researchers in the Society for Creative Anachronism.  They said defrutum was basically a reduced liquid made by cooking down red wine, grape juice, or verjus to about 1/3 of it's original volume.  This made more sense to me than the recipes saying it was fig syrup.

On to the cooking instructions.  This was pretty easy.  I was looking at a sort of marinade/basting sauce, browning the chicken first and then roasting it. I assumed a wood-fired oven and a relatively high heat.  Service must be a little of the reduced wine on a plate under the chicken.

Directions
Preheat the oven to 425F.
Combine the olive oil, fish sauce, and red wine and whisk together.  Stir in the leek, herbs, ground coriander, and pepper. 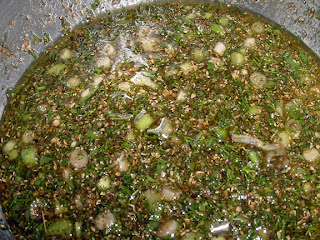 Heat a little olive oil in a dutch oven and fry the whole chicken on all sides until it barely begins to change color. 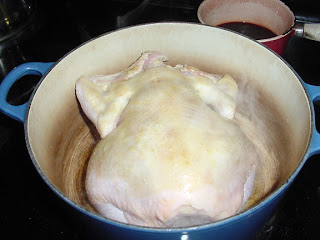 Add about half of the herb mixture, coating the chicken on all sides, and continue to saute until the bird begins to turn golden. 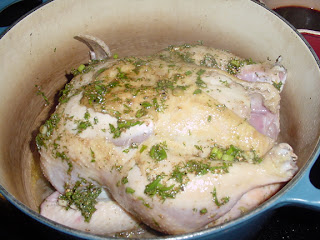 Pour the rest of the herb mixture over the chicken and place in the oven for 1 hour, or until the chicken is done.  Baste every 15 minutes with the pan juices.

Lightly sauce a platter with the defrutum or reduced wine sauce.  Place whole chicken on top and allow to rest.  Sprinkle chicken with salt and pepper to taste.  Place extra defrutum in a sauce boat and pass with the chicken. 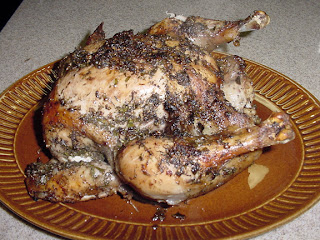 My defrutum was a no show.  I ended up on the phone near the end of it's cook down and boiled the pot dry, filling the kitchen with smoke.  There wasn't time to cook down more so I went without it.  The burnt pot is still out in the garage and I don't even want to look at it.

But the chicken is tasty!  Very tasty!  Waddle-away-from-the-table-what-was-I-thinking-eating-another-helping tasty!  The only thing that could have improved this would have been actually cooking it in a wood-fired oven or in a Weber grill to add a smokey flavor that must have been there all those centuries ago.