In preparation for this year's deer another project this past month involved grinding what was left of last year's venison into burger to make way for this year's deer.  I do a mix of 4 lbs of ground venison and 1 pound of ground pork for a nice lean to fat ratio that makes for juicy burgers, sausages, and loaves.  This year I made venison bologna using LEM's prepackaged spice mix a friend gave me to try.  This stuff tastes just like I remember my grandfather's venison bologna tasting.  I have no idea if this is what he was using way back then but I really like it.  Could be the nostalgia thing.  I also made a bunch of spicy teriyaki jerky for Michael to carry on his bicycle journeys. 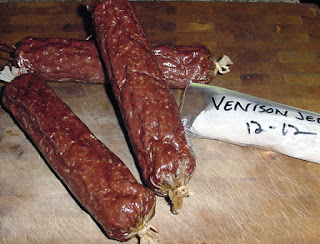 I ended up with 5 lbs worth of the bologna in one pound sticks, 3 pounds of jerky and 15 pounds of ground burger in one pound packages.  Michael got his deer so in addition to the above we now have a new supply of roasts and steaks and enough trimmings to make a batch of link sausage.  Santa's bringing me a smoker for Christmas so I think I'm going to wait until it arrives to make my first batch of smoked venison sausage!