Ok, so it's not really cooking.  But that's cool because not only does this taste great, kidlets can make it nearly on their own with just a bit of supervision. All that's involved is a microwave. 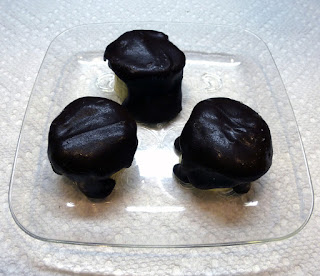 Start out by cutting a couple of bananas into nice sized chunks.  Ripe bananas taste best and are easily cut with a butter knife or a plastic knife to make it safer for little fingers.  Smear each piece of banana with a little peanut butter, your favorite brand or, even better, your own homemade.  I previously did a post on making nut butters but didn't specifically use peanuts.  Just follow the technique here and use a jar of roasted peanuts.  Use roasted unsalted if you want to control the amount of salt or roasted and salted if it's not an issue. 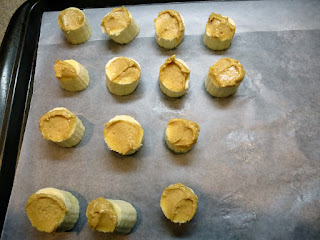 Next, nuke a half cup of the chocolate of your choice, (milk, dark, bittersweet, morsels, broken up bars, whatever) and two tablespoons of milk (again, your choice- full fat or not, dairy, almond, soy) for ten seconds.  Stir, stir stir until the chocolate is smooth.  You may have to add a bit more milk (but not much! Just a half a teaspoon at a time), nuke another 10 seconds, and stir some more until you get to a nice pourable texture.  Not too thick, but not too runny either.  I added a drop, less than 1/8 teaspoon, of corn syrup for a nice shine. 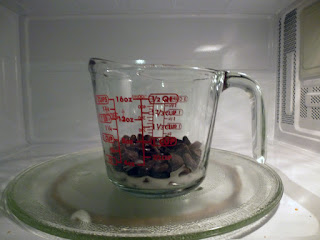 Drizzle a tablespoon of the chocolate over each banana bite.  If you've covered them all and there's still some left go back and do it again! 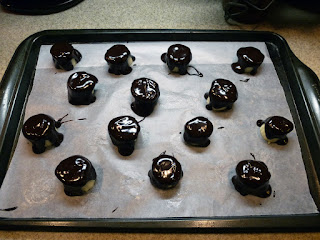 Finally, slide the tray into the freezer and allow the bites to freeze for a few hours or overnight (although they taste pretty good right now!). 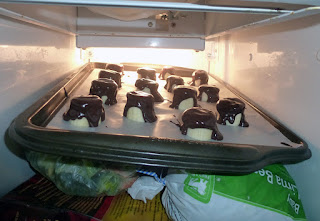 When you're ready to serve them pull them out and allow to sit for 10 minutes,  This allows them to thaw a little (thus avoiding brain freeze) and the banana becomes soft and creamy.

Chocolate Peanut Butter Banana Creams make a great afternoon snack for the kids and they're not bad with a cup of coffee either!