April has been a hit-the-ground-runnin' kinda month so far.  We started it off with a Mediterranean-themed potluck.  I was a little worried that people might be intimidated until I looked at a map and saw just how many different countries and cultures had a coast on the Med!  Something for everyone!

One of our non-cooking friends solved the dilemma by going to the olive bar at Krogers, corralling a deli worker and giving her the directive, "If it's Mediterranean put it in a bowl!" thus contributing a nice collection of gnoshes.

I took the opportunity to try a new method of roasting lamb as well as making enough dolmas to satisfy a crowd.  But what surprised me most was the almost immediate decimation of a simple grilled eggplant platter.

I've always done leg of lamb as a traditional roast, bone-in or boned, rolled and tied.  Recently I read about a method where the boneless leg is butterflied, laid on top of a layer of "bloomed" herbs, spice and veg, roasted at a low temp and then finished off under the broiler.  I thought I'd try that but because I wanted a Greek feel to the lamb, I finished it off on the grill.

I had a semi-boneless leg in the freezer so I boned that, sliced it through the center, removed the fat and connective tissue from the underside, flipped it and trimmed the fat cap to about 1/4" thickness.  Then I pounded it with a smooth mallet so it would lie flat, scored that fat, sprinkled it with salt and set it aside uncovered for an hour.  I turned the oven on to heat to 250F. While the oven was heating I combined 1/3 cup vegetable oil, 3 shallots, sliced thin,4 garlic cloves, peeled and smashed, 1 (1-inch) piece ginger, sliced into 1/2-inch-thick rounds and smashed, 1 tablespoon coriander seeds,1 tablespoon cumin seeds,1 tablespoon mustard seeds, 3 bay leaves, 2 (2-inch) strips lemon zest, and 1/3 cup of fresh oregano leaves on a rimmed baking sheet.  This was slipped into the oven for an hour to "bloom" the flavors and roasted until the garlic was just turning golden.  "Bloom".  I like that word.  Sounds a little pretentious in this context but I get it. What this did was flavored the oil and made the aromatics more accessible to the meat. 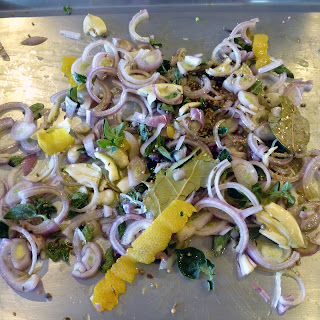 I discarded the bay leaves and added another 4-5 sprigs of oregano on top of the bloomed aromatics because I wanted a heavier accent of that flavor in the meat.  Forget mint with lamb, give me the oregano! 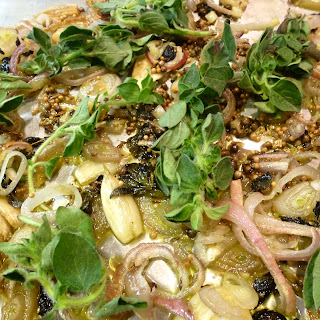 I patted the lamb dry, laid it on it's bed of aromatics and put it in the oven for about an hour until a thermometer read 150F.  If you prefer your lamb rare, you might want to pull it from the oven at 120F.  While the lamb was roasting I fired up the grill and heated it to almost 600F.  If you're doing this totally in the oven, pull the lamb, place a rack so the surface of the lamb will be about 5" below the broiler element and heat the broiler.

Next I put the lamb, baking sheet and all, into the grill, closed the lid, and let it go until the surface was well browned and charred in spots.  Put the lamb under the broiler and do the same thing if you're not using the grill.  Keep an eye on it because this step happens quickly!  Pull the lamb and place it on a cutting board, tenting it with foil, to rest. 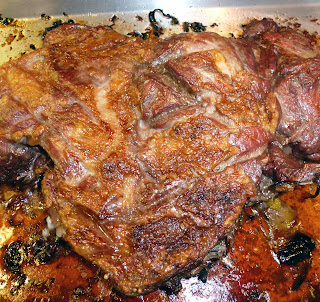 While the lamb is resting, chop 1/3 cup each of fresh oregano and cilantro and mince a small shallot.  Strain the juices from the lamb and aromatics into a small saucepan, pressing down on the solids to extract all the liquid.  Stir in the chopped herbs and shallot and add 2 tablespoons of fresh lemon juice.  Taste and adjust the salt and pepper.

Slice the lamb across the grain, arrange on a platter.  If necessary, just warm the sauce and then drizzle over the lamb. 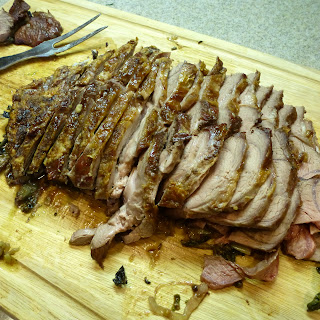 This turned out to be the best lamb I've ever made (and I've roasted a lot of lamb)!  Tender, juicy, flavorful, and much quicker than my old method.  This will be my go-to lamb roast from here on out!

Next I made a platterful of dolmas but for the first time rolled them in actual grape leaves.  Don't know why I waited so long to do that.  Grape leaves roll easier than anything else I've used.  You can find my recipe for dolmas here. 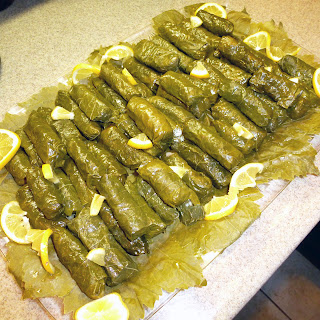 Lastly I made a platter of grilled eggplant with roasted red peppers and caper berries.  I bought 3 eggplants but prepared only two thinking this wouldn't go fast.  Wrong!

I sliced thick slices of eggplant, salted both sides liberally and let them sit for an hour to draw out the water.  Salting collapses the cells of the eggplant and concentrates both the flavor and texture of the vegetable.  It also lessens the amount of oil it will absorb. When cooked the eggplant becomes almost creamy inside with a more pronounced umami flavor.  I brushed the eggplant liberally with olive oil and grilled it until it had pronounced grill marks on one side, flipped it and did the same again.  By this time the slices poked tender.  I laid them on a platter and placed a generous strip of our homegrown, roasted Corno di Toro peppers that I froze last summer and a caper berry on each one.  Caper berries are similar to a green olive in looks and preparation but with a pleasantly musky caper taste.  Over this I drizzled a little anchovy vinaigrette that had been boosted with more freshly chopped herbs (oregano, chives, sage, parsley). 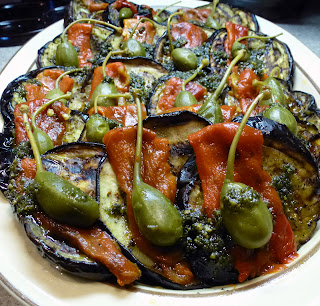 It was a good thing Michael and I had tasted a few slices when assembling the platter because when we went for them at the party, the platter was bare!