A little of both, please! A bit of winter and a bit of spring. 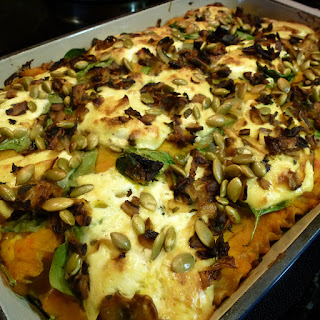 It's cold enough to crave a bit of winter comfort food yet we are impatient with our slow spring and want new fresh greens.  There were a couple of containers of winter squash puree left in the freezer, odds and ends of cheese in the fridge needing to be used, and... a whole bag of new spinach!

In the fridge I found about a cup of cottage cheese, a 2 or 3 ounce piece of nothing-to-write-home-about blue cheese, and a 10 ounce log of chevre.  There was a bag with about 6 cups worth of spinach.  In the cupboard were a handful of pepitas and maybe a half a cup of sliced and dried shitake mushrooms.  An onion reputed to be a Vidalia lurked on the counter.  Ok, so there was a salad.  But I wanted something a little more substantial.  It was a tad more than just chilly outside.  Back in the cupboard I found an open package with a few whole wheat lasagna noodles.  Hmmmm... cheese, noodles, spinach.... hey!  Is there (runs to garage freezer), yes! A 2-cup container of frozen mixed winter squash puree!

Into the microwave with the squash puree for a thaw, and into boiling water with the noodles.  Drain the noodles and lay them out in a single layer on foil so they don't stick.  Turn the oven on to 400F and soak the shitakes just covered with boiling water in a bowl to reconstitute.

Slice the vidalia thinly and toss it into a heated saute pan with melted butter on med-low heat until the onions are tender and and beginning to carmalize along with the reconstituted shitakes and some of those new sage leaves cut in a chiffonade.  Reserve a little of the cut sage leaves.

Mix the cottage, goat, and blue cheese together along with 2 eggs and a very generous pinch of Quatre Epices powder. 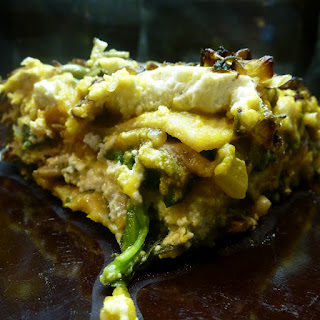 Spread 1/3 of the cheese mixture on the noodles.  On top of this place a generous layer of spinach leaves.  Remember, as they heat up they'll wilt so don't be afraid to pile them a little.  Spread a third of the onion-shitake mixture on top of the spinach and sprinkle with a few pepitas. Cover all this with another layer of noodles cut to fit.

Repeat the layers of puree, cheese and veg and again cover with a final layer of noodles cut to fit.  Press down gently so everything is just below the rim of the casserole.

On top of the last layer of noodles spread the remaining puree and lay a few spinach leaves across the top.  Place dollops of the remaining cheese mixture evenly overall, distribute what's left of the onion mixture over that, and sprinkle with more pepitas and reserved sage leaf chiffonade.

Into the 400F oven for 45 minutes, then pull and allow to rest for 15 minutes.  Cut and plate large squares, serve, and savor the love! 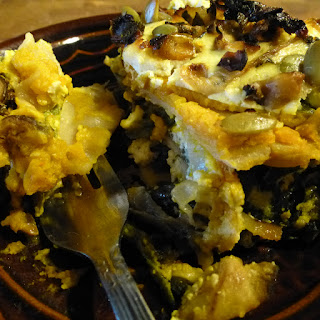