Despite the warm winter and early spring we experienced here in Floyd,  I feel like I've been running behind with the garden this season.  I got tomatoes, eggplants, peppers, cucumbers, melons, and squash in by mid-June but never did get any annual herbs planted.  I got cannellini beans and chickpeas in the ground in the Lower 40 and Michael got tepary beans in the ground in the house garden but we never got our edamame or green beans planted.  Luckily I have lots of quarts of green beans from last year.  We have harvested about a quarter bushel of Yukon Gold potatoes, but would have had a lot more if I had been more diligent.  I think we're going to have a bumper crop of fingerlings.  I'm convinced that the 3 lb./$4 dollar bag of mixed fingerlings from the produce section of the local Walmart grocery is growing better than the $12 per lb. single variety fingerling seed potatoes from a seed supplier ever would have.  Same goes for the sweet potatoes.  They're growing gangbusters from starts from a few grocery store sweets.  Major potato lesson learned there! 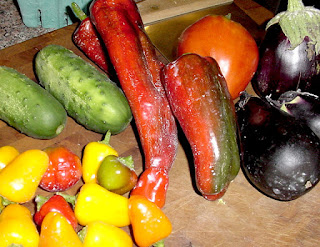 See those eggplants on the right?  Those are the first ever eggplants I've been able to bring to maturity since we've lived in Floyd.  Other places we've lived I've been inundated with eggplants but here we have large devastating populations of flea beetles that turn the leaves of young plants to lace, weakening and killing them.  It took spraying the transplants with Surround and pyrethrum as soon as they were in the ground and then immediately covering the bed with floating row cover that allowed the plants to get to a size where they could resist the damage.  To the right of the eggplants is the first Smokey tomato.  It's destiny is sourdough bread slathered with mayo for my lunch.  Next to that is a Carnival bell and two Corno di Toro sweet peppers.  Then a variety of pickling cucumber called Homemade and in the lower left corner, Mini-Belles.  I absolutely love those for appetizer stuffing, pickling, and fresh snacking.

The white powdery substance you see on the veg is Surround.  It's a kaolin clay product that gets mixed with water and sprayed on the fruit and veg.  It was first used mainly on apples and other tree fruits but was found effective for other crops as well.  It's a pretty innocuous substance but bugs don't like it and it also helps protect fruit and veg from sunscald.

The pumpkins and winter squash are in full flower and fruiting, the crookneck summer squash are just beginning to set fruit.  The Moon and Stars watermelons and Pike muskmelons are looking good.  It's just about time to start the fall garden seeds for broccoli, cabbage, greens and other cold weather crops already.

This was Michael's first foray into the world of desserts.  We had a box of red currants that needed to be used but were still stocked with red currant jelly from last year.  So Michael bravely forged ahead, found this Icelandic recipe for Red Currant Cobbler, and to the tune of Led Zeppelin's "Immigrant Song" successfully created a sweet, tangy, beautiful dessert. 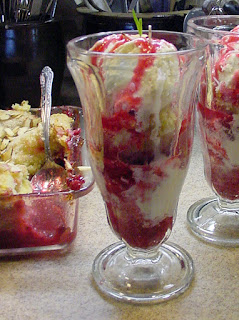 Cooking Floyd: Supper Out of a Box

This week's CSA box yielded among other things sweet yellow corn, baby lettuce mix, and vine-ripened tomatoes.  A friend had gifted me with a couple of her sweet purple Cippolini onions.  The volunteer cilantro in my garden just keeps coming on and the Carnival bell peppers are producing.  All of this just screamed Black Bean and Corn Salad! 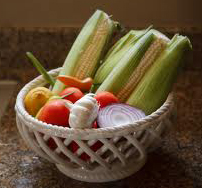 Ronald Reagan is not high on my list of Presidents I Admire.  I mean, the man's administration had ketchup designated as a vegetable.  And now those wacky Republicans are at it again designating pizza as a vegetable (OK, actually the tomato paste ON the pizza) !

But what Ronnie did get right was designating the month of July as National Ice Cream Month and the third Sunday of July as National Ice Cream Day.  Just in time for homemade ice cream to be studded and flavored with all the gorgeous summer fruits ripening now!  Yesterday Michael headed off to forage wineberries while I was trying to figure out what to do with a bunch of leftover cream and buttermilk.  Yep, you know where this is going... 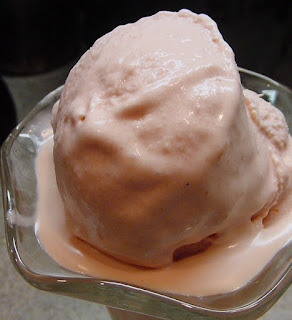 We opted for a quiet Fourth of July at home.  Oh, there were still fireworks.  Our neighbor's son-in-law puts on a pretty good show at her house which is below and to the left of us.  But we didn't go out amongst the tourists and the traffic in search of a big show.  We grilled everything in the fridge instead and there was nary a burger in sight!

Michael and I got started on this when he came back from his bike trip extolling the fine job the caterer and a BBQ guy did with the vegetarian food option.  He was especially taken with a grilled sweet potato and eggplant sandwich and split heads of marinated grilled romaine.  So we decided our 4th of July BBQ would be grilled veggies.

We started by prepping inch-thick slices of sweet potato.  They went into boiling water to cook until they just poked tender, then were drained, chilled, peeled, brushed with ghee (for its higher smoke point) and caged. 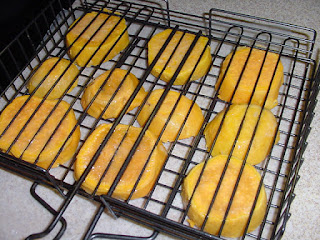