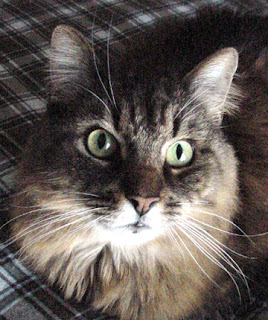 Franklin wants me to give a heartfelt Thank You! to Gladys for the wonderful catnip mouse she sent home for his Christmas present! 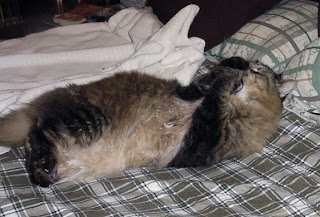 He said the mouse was very well made and the catnip stuffing of the highest quality... 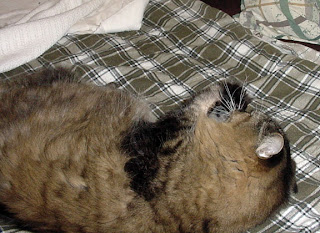 ...and he greatly enjoyed getting his jungle cat on!


After racing up and down the stairs with it, satisfying a HUGE munchie binge, and passing out, 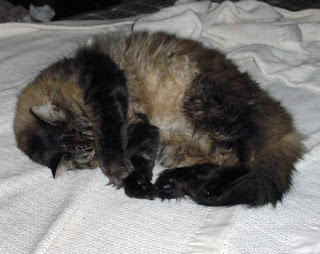 he can't remember where he left it! 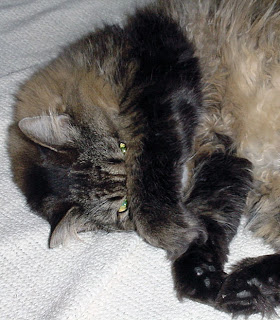 And he is very P.O.'d with himself! 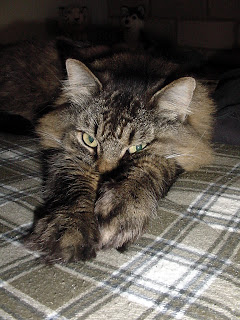 Email ThisBlogThis!Share to TwitterShare to FacebookShare to Pinterest
Labels: Franklin

On December 1st I posted about how we set up our seed starting shelf to grow tender greens for winter salads.  Twenty-eight days later I harvested our first batch of salad greens.  The little plants are still very baby-like and I had to gently pinch off the larger outer leaves but with each harvest they'll grow sturdier and by the third or fourth harvest I'll be cutting the whole plant off about 2" above the base. 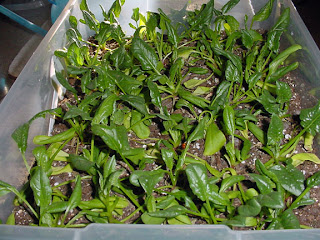 The spinach prior to pinching back... 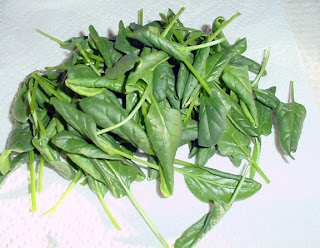 ...and the first spinach harvest. 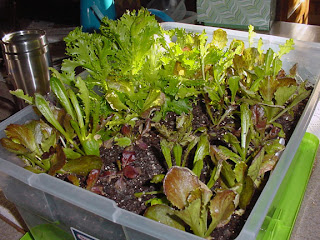 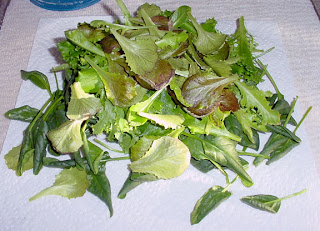 ...and the first lettuce harvest.

All together I got about 4 cups of tender baby greens out of the first harvest, enough for the two of us to enjoy for our evening salad!
Posted by Rebecca... at 5:02 PM No comments:

Recently I've been exploring making our pasta.  It took me several tries to be able to produce a consistent nicely textured basic all-purpose flour and egg pasta but once I did I wanted to try making different kinds and flavors of pasta dough.  My first variation was a buckwheat dough for Butternut Squash Raviolis.  (You'll also find a tutorial for making basic pasta on that post.)  This time I wanted to add kale since I had a bagful of kale flakes from kale chips that had turned out too bland for snacking. 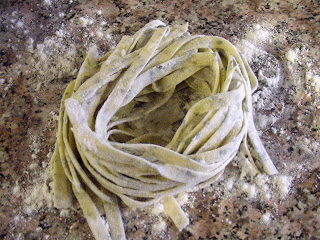 It's possible to save yourself a whole lot of money by learning a bit about cutting your own meat.  Whether you buy from the grocery store or from a local farmer, the less the seller has to handle the meat the more money you'll save.  I recently bought a whole strip loin, cut it into steaks, and saved approximately $8.99/lb. 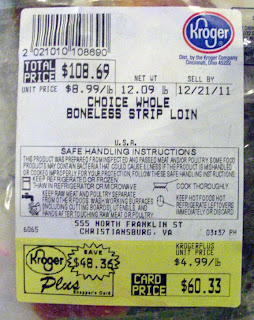 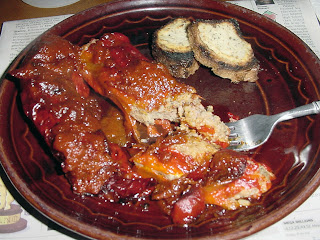 The solution to this week's challenge feels like cheating.  It's not, it's exactly the result I was aiming for when I froze them: an effortless meal.  Stuffed Marconi Peppers.

I've thought a lot about this post and how to present it.  I've talked to other food bloggers who hunt and process their own meat and there seems to be no agreement on how to present the topic without offending somebody or stirring up controversy but total agreement that it will offend someone and stir up controversy.  Joel over at Well Preserved says his readership drops off considerably when he just talks about his family's annual moose hunt.  I feel that people who eat meat, especially people whose meat arrives in cling-wrapped styro trays, out of respect for the animal they consume and respect for themselves, should at least once witness the cold cruelty of an industrial feedlot and slaughterhouse and contrast that with the personal involvement and concern of someone who carefully hunts and/or raises livestock and processes it at home to feed family and friends.  Bacon does not grow from a seed.  If you don't want to or can't bring yourself to acknowledge where meat comes from and how it gets to you, you're probably better off not eating it.

Does that mean there are no irresponsible people hunting or raising their own livestock for the table?  Unfortunately, no.  But so far they are non-existent in the circles I travel.  I am fortunate.

Responsible, ethical hunting is a far cry from the anti-hunting propaganda some organizations disseminate.  It's all about forestry and wild animal management, husbanding the woods and wildlife, if you will, to maintain a healthy balance that nurtures the sustainability of the wild.  There are few things sadder than the sight of malnourished deer because the woods can't support the population or road-killed deer every few miles as they move about trying to find food.

Michael and I took the time to photograph the process of butchering and wrapping a deer for freezing but I realized that what we had to offer wasn't nearly as good as some of the videos on YouTube and the books we have on the subject.  I'll concentrate on the wonderful things that can be made with it.

If you are local and would like to learn hands-on when we get our next deer, leave your email and phone number in a comment on this post.  Your contact info will not be published.  Michael will be hunting tomorrow (Friday, Dec. 9) and most Saturdays until the end of the season.  Since we can't predict when he will get a deer be prepared for spur-of-the-moment notification.

Books I've found very helpful are:
The Ultimate Guide to Butchering Deer by John Weiss.  Everything from field dressing to cutting to cooking venison.  Good tips on how to cook different cuts of meat although the recipes themselves are very buck camp run-of-the-mill.  Black and white, fairly sterile photos.

The Complete Book of Butchering, Smoking, Curing, and Sausage Making: How to Harvest Your Livestock & Wild Game by Philip Hasheider.  Lots of photographs.  Clear, color photographs.  Graphic.  Not for the faint of heart but rooted in the how it is reality photographs.  Good recipes, good writing.  Covers nearly every kind of domestic livestock, poultry, and fowl, both large and small game, and fish.

For those of you who want to go beyond basic fresh sausage-making I highly recommend Charcuterie: The Craft of Salting, Smoking, and Curing by Michael Ruhlman, Brian Polcyn, and Thomas Keller.  This book will take you into ways of preserving meats you never thought were possible to do at home: dry cures, smoke cures, salt cures, BACON!, as well as confits, pates, and terrines, and the condiments to go with them.  Excellent recipes that are adaptable to game.

The more I think about the Dark Days Challenge the more I realize what it entails.  I thought I was doing pretty well already.  What veggies and fruits we don't grow and preserve I buy locally.  But wait!  This means no citrus, no avocados, artichokes, olives, bananas, etc., as well as what happens when I run out of what I have canned, dried, or frozen.  I've been getting flour and cornmeal from a local mill, but I don't know where they get their grains from.  Rice is right out.  Local butter is exorbitantly expensive and cheese, well, don't get me started.  Cheese is expensive anyway, even before going local.  But I can do this.  It's one meal a week.  And I am going to learn so much!

This week's meal is trout from Big Pine Trout Farm dredged in cornmeal from Big Spring Mill (where I also get my flour), tarter sauce, roasted butternut squash bought in bulk from Wade's Orchard (where I also get my apples in bulk), and green beans that we grew and canned.  Dessert is apple dumplings. 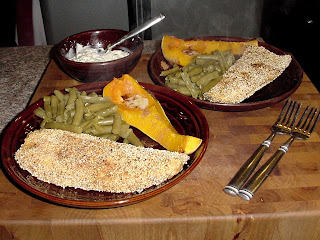 Blogging Floyd: 2011: A PC Odyssey plus the Dark Days Challenge

HAL appears to be dying.  A little over a week ago we had some kind of power surge and it took our desk top PC down.  We took it in to Ben Kiser and it turned out to be the power supply.  Everything else was fine.  HAL was back up and running happily.  Then, right before this past weekend, the power went out for several hours.  HAL came back online but without video input.  I keep hearing strains of "Thus Spake Zarathustra" whistling through the eaves of our house and a well-modulated but sad voice saying, "Dave?  Dave? D-a-a-a-v-e?"  So HAL is going back to Ben for a visit and I'm back on the P-O-S laptop which I've discovered has a very crude photo editing program.  All just in time for the beginning of the Dark Days Challenge with my first post due tomorrow.  Of course.

I've been following the Dark Days Challenge for the last couple of years.  This year, with a reminder from Cynthia at Mother's Kitchen, I got my butt over to (not so) Urban Hennery in the nick of time to sign up.  The Dark Days Challenge is to cook a minimum of one meal each week featuring SOLE (sustainable, organic, local, ethical) ingredients and write about it.  ..."Traditionally, local food challenges call for a 100 mile radius. Winter time is more difficult in many climates, especially if you’re new to eating locally, so my default winter definition is 150 miles. You can choose to make your radius smaller or slightly larger as you need. Typical exceptions to the local requirement are oils, coffee, chocolate and spices." - (not so) Urban Hennery.

So those are the parameters I'm working within.  My first thoughts on accepting this challenge were, "Am I stuck with only trout since Big Jim's trout farm is within the local circle but Indigo Seafood is a local business and brings fish and seafood to me?" and "Where the hell am I gonna find local blue cheese for my Stuffed Venison Backstrap post?"  Darius, can you help me out?  I can just hear HAL saying....

Out in the garden Swiss chard, cilantro, dill, and our perennial herbs are still thriving despite several really hard frosts and many lighter ones.  I'm sure that could end any day now but that doesn't mean it's the end of fresh greens.  Last February I showed you our seed-starting shelf and how we built it.  I talked about how we use it to grow greens in winter and today I want to show you how we set it up for that. 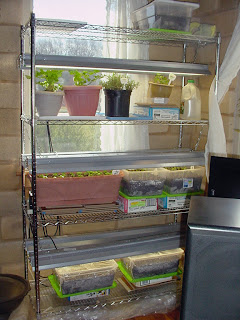