Ramsey's recipe calls for ciabatta or a baguette thinly sliced and toasted.  I had a partial loaf of multi-grain bread that I trimmed of crusts and sliced and quartered into inch thick squares.  I went for hearty.  These were brushed with olive oil and toasted in a 325F oven until completely dry and golden.  It took about 30 minutes and I flipped them halfway through.  Set aside. 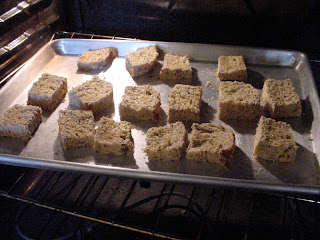 *An aside about olive oil and a tout for my favorite.  A couple of years ago I went on a search for an American grown and pressed olive oil.  Mostly because I was appalled by the adulteration that was going on with olive oil but also in an effort to source olive oil closer to home.  OK, so it's on the other coast and probably as far away from me as an import is, but it is made in the same country I'm living in. I found Sciabica, a family run orchard in California. I use their Marsala blend for everyday cooking and one of their varietals (currently the Sevillano Fall Harvest) when I want the oil flavor to stand out in finishes, dressings, and dipping.  Their oils are very tasty, they live up to their 100% satisfaction guarantee, and their customer service is superb.*

Toasted pumpkin seeds are called for in the original recipe but I was out so I toasted up some chopped walnuts instead.  I use the microwave to toast nuts, a little trick I learned from Barbara Kafka.  Spread the nuts in a single layer on a microwave-safe plate, toast on high and stir at two and a half minute intervals until the nuts reach your desired degree of toastiness.  Set aside. 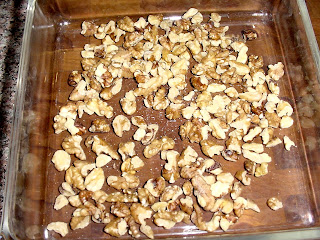 Cut an approximately 2-2 1/2 pound butternut squash in half, deseed, peel, and cut into 1/2 inch square cubes. 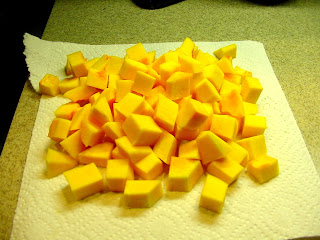 Heat a couple of tablespoons of olive oil in a large frying pan and add the squash cubes.  Season with salt and pepper.  Saute over medium heat until the cubes begin to soften and take on a little color, about 4-5 minutes.  You may have to do this in batches depending on the size of your pan. 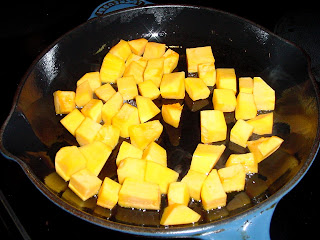 Return all of the squash to the pan and add 3 tablespoons of butter.  Continue to cook the squash until it's soft and caramelized, about another 5 minutes.  Stir frequently to prevent sticking. 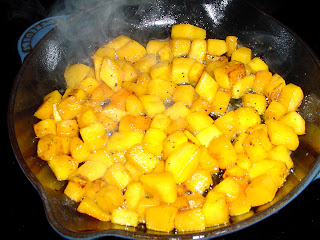 Using a slotted spoon, remove the squash to paper towels and allow to drain and cool slightly. 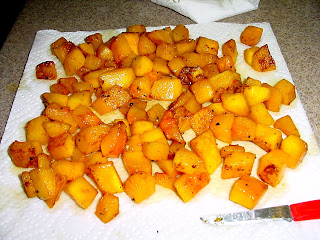 While the squash is cooking, heat up the broiler and prepare the salad greens.  Ramsey's recipe calls for sharp-tasting greens like endive and arugula.  I have some chard growing and had some leaf lettuce but no sharp greens.  I used whole flat leaf parsley and cutting celery leaves (growing on our salad shelf) mixed in with the chard and lettuce to get that bit of piquancy the recommended greens would have supplied. 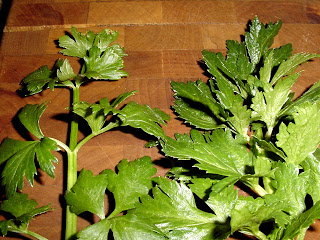 That's flat leaf parsley on the left and cutting celery on the right.  The leaves and stems are remarkably similar but the aroma and taste definitely is not.  In fact, cutting celery is much stronger in flavor than celery.  If you are unfamiliar with this herb, go light with it until you are accustomed to it's strength of flavor.  I've come to love it and recommend that you grow this herb in your garden or in a pot.  Its growing habit and culture is very similar to the parsley it resembles.

Once the salad greens are mixed, prepare your toasts for the broiler.  Ramsey spreads his with ricotta.  I used Boursin-style chevre I made and froze back in July. 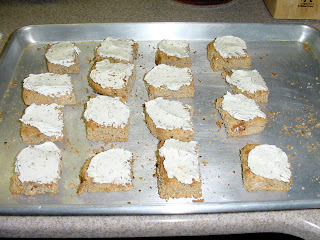 Place the toasts under the broiler and toast until the cheese is just bubbly.  Don't do what I did and char the edges of the toasts.  Watch them carefully.  I always char the toasts. 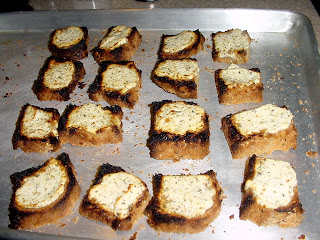 Lightly dress the greens with a basic vinaigrette of 3 parts oil, 1 part vinegar, juice of 1 lemon, and salt and pepper to taste.  I made my vinaigrette with walnut oil, partly to save a step and partly because I didn't have the pumpkin oil Ramsey calls for later. 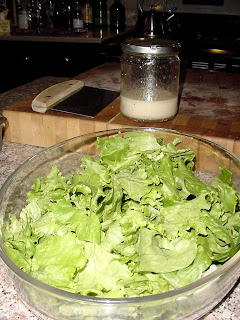 Top the greens with the warm squash cubes.  Drizzle a little more vinaigrette (or pumpkin oil if you have it) over the cubes and sprinkle lightly with balsamic vinegar. (Update: What was I thinking?  I should have used my home made maple vinegar instead of balsamic!)  Garnish with the toasted, chopped walnuts and shavings of Parmesan cheese. 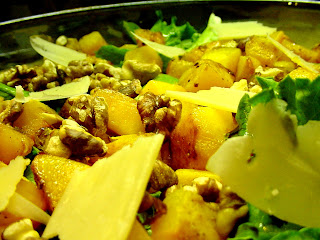 Serve the salad accompanied by the cheese toasts.
Posted by Rebecca... at 12:51 PM