During a hiatus from Floyd we lived in the Finger Lakes area of New York state, New York's answer to the Napa Valley for proliferation of wineries.  Floyd is also surrounded by wineries and in both places I enjoy exploring the local vintages.  However, Michael and I are not big wine drinkers, usually consuming only a glass or two out of a bottle with an occasional meal.  I use wine in cooking but that wouldn't use up the rest of a bottle very fast.

I like using wine vinegars to make herbal and fruit flavored vinegars and while I could get red wine vinegar by the gallon, finding bulk white wine vinegar was more difficult.  The small bottles in the store were prohibitively expensive to buy for the amount I wanted to work with and I couldn't seem to get a restaurant friend to understand that I wanted to buy an entire case of 4 gallons if he would order it for me (he insisted on giving me a gallon of red). 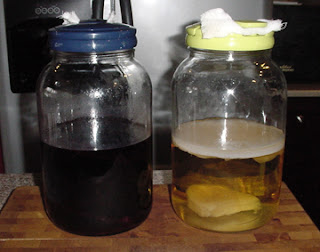 The only solution I could come up with was to learn to make my own.  Research showed that making vinegar is really a very simple procedure.  I could let the wine sit until it worked into vinegar on it's own but many wines are sulfited to slow bacteria from doing just that.  I'm just not that patient.  The other method was to obtain a "mother" from someone already making vinegar or order one online.  I hate paying for something that in theory floats around free for the taking and I didn't know any one who was making vinegar.  If I did order a mother would it arrive healthy and alive?

What's a vinegar mother? The Wikipedia defintion is: "Mother of vinegar is a substance composed of a form of cellulose and acetic acid bacteria that develops on fermenting alcoholic liquids, which turns alcohol into acetic acid with the help of oxygen from the air. It is added to wine, cider, or other alcoholic liquids to produce vinegar."  What the definition doesn't tell you is the mother looks like a cloudy piece of jelly fish that has had the misfortune to wash up on the beach and die.  Appetizing, huh.
I found out that I could start a vinegar jug by using raw vinegar to inoculate the wine.  Most vinegars on grocery store shelves have been pasteurized to stop the formation of a mother in the jars.  The average consumer just doesn't want to see jelly fish bits in their sparkling clear (expensive) wine vinegar purchases.  But over in the health food section I found a quart sized bottle of Bragg's Raw Unfiltered Cider Vinegar.  Aha!  I didn't see anything resembling a mother in there but there were bits of sediment floating around so I purchased that for my experiment.  Nothing ventured, nothing gained!

While looking online for a mother I saw all kinds of (also expensive) really cool jugs, barrels and crocks specifically designed for vinegar making.  I did lust for one because I am a sucker for kitchen gadgets, a weakness that I work hard to rein in, but they aren't necessary and no one is going to see a really cool vinegar barrel since the container is kept in the dark while working.  And face it, counter top real estate is valuable.  I use two 1 gallon glass jars that I got from a local restaurant.

The only other bit of equipment I needed was cheesecloth or a piece of loosely woven fabric for covering the top of the jars and I was ready.

I buy 1.5 liter jugs of dry, drinkable table wine, both red and white, to use in cooking so I don't have to open a bottle of good stuff for a quarter cup.  I used this to start the gallon jars.

I washed the jars well in hot water.  They don't need to be sterile, just really clean.  I put half the bottle of Bragg's in each jug followed by twice that amount of wine, red in one, white in the other.  I had a quart and a half of liquid in each jug.  You can start with a lesser amount, just use a 2 parts wine:1 part vinegar ratio.  Stir it up, cover the top of the jar with a double layer of cheesecloth held in place with a rubber band, and that's it!  Store the jars in a dark place and allow nature to work her magic.  In about a month you'll see a thin layer of jelly-like substance begin to form.  Oh yeah, it looks nasty and bad and you'll think your efforts have gone awry but that's the mother.  She's birthing your vinegar.  If you sniff the jug you will smell vinegar.  At this point you can begin adding in any heels of bottles you have leftover.  And actually, you don't have to keep red and white separate if you don't want the individual vinegars.  You can run just one jug and pour any kind of wine in there.  **!! If at any time your gallon vinegar jars start to smell like furniture polish it means something has gone wrong with the process and you should dump them and start over. !!**  I've been running my jars for 2 years and haven't had this happen. Yet.

When the jars are 3/4 to almost full I pour off most of the vinegar, leaving about two cups and the mother behind, into a pot and bring the temp up to 145F for 30 minutes. This kills the active beasties that make the vinegar and will prevent a mother from forming in the decanted vinegar that you're using. Allow to cool and then pour through a cheesecloth lined funnel into bottles for storage. Leftover wine bottles are great for this. Cap, cork, or otherwise plug the bottles and store away from light.   You can use the vinegar right away or set it aside in a dark place and allow it to age a little. Return the gallon jar with the mother to the cupboard and continue to add wine to it.  I find that the fresh vinegar is very strong and sharp, needing to be diluted a little with water if using immediately.  Bottles I've stored for awhile mellow out and round off in flavor.  I recently cracked open a year old bottle of tarragon vinegar and it was smooth and fragrant.

Here's a caveat:  Don't use your home made vinegars to make pickled preserves that are not for immediate consumption.  When canning pickles and such you want to use a vinegar that's a consistent 5% acid which is the minimum acidity safe for home canning.  Unless you have a good ph test kit you won't know how acidic your vinegar is.  Stay safe and use commercial vinegars that list 5% acidity on their labels for home canning.

Making fruit and herbal vinegars is easy.  I use the 1.5 liter jugs that the cooking wine came in for large batches or smaller but still good sized jars for less.  You can use single herbs or fruit to make a single flavor (like raspberry) or a combination (like Herbes de Provence) but always use fresh fruits or herbs for best flavor.  The technique is the same for any fruit or herb so I'll provide two examples.

Tarragon Vinegar
Loosely stuff a clean jar full of fresh tarragon sprigs.  Pour in enough vinegar to completely cover the herb and cap.  Store in a cool dark place.  When the vinegar smells and tastes strongly of tarragon, filter into clean jars, add a fresh sprig to the jar for decoration (or not), and cap, label, date, and store.  That's it.  There's really no definite amount of time it will take to steep the herb flavor into the vinegar.  Rely on smell and taste.

Raspberry Vinegar
Fill a jar halfway full with fresh or frozen raspberries and lightly crush them.  Fill to the top with vinegar, cap and store.  After a month taste for the strength of raspberry flavor.  At this point it won't taste like store bought raspberry vinegar because there's no sugar added.  If the flavor is weak, strain off the vinegar and reserve, throw the old raspberries out, put new raspberries in the jar and pour the weak raspberry vinegar back over them.  Allow to steep again.  When the preferred flavor is reached, strain the vinegar off into a pot and add sugar, stirring to dissolve, a bit at a time until the vinegar is sweetened to your taste.  For added safety with fruit vinegars, heat following the directions for pasteurization above, and cool.  Pour back into clean jars, add a few berries for decoration (or not), cap, label, date, and store. 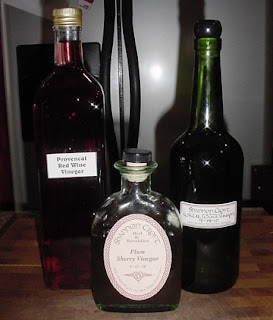 I actually end up with more vinegar than I can use so I make fruit and herbal vinegars to give away as gifts. I search out cheap unique bottles at yard sales, flea markets, and thrift shops throughout the year, wash them, and pour in the finished vinegars. A dip of the top in sealing wax and a raffia tie makes them look great.  If you have a like-minded friend you can make a vinegar starter gift.  Place a piece of the mother in a pint jar and fill it with your home made vinegar. Cap it and add a tag with directions on how to maintain the jugs from the above.
Posted by Rebecca... at 11:15 AM

Email ThisBlogThis!Share to TwitterShare to FacebookShare to Pinterest
Labels: home made vinegar, vinegar