What is it about this time of year?  Cooks and preservers everywhere get this spontaneous, irresistible urge to organize their pantries.  Is it genetic? Something similar in our code to that which makes birds fly south, salmon swim upstream, and lemmings jump off cliffs?  Is it the Universal Subconscious linking us all together?  Or is it just that by January we all tire of digging through cupboards, freezers, and under the bed for all those goodies we processed and squirreled away to feed us through the dark days?  Whatever it is that motivates us, it seems like everybody is in the midst of organizing their pantries this month.

I envy people that have official walk-in pantries.  Small and not-so-small rooms that house spacious built in shelves and racks, chest freezers, and refrigerators, with properly controlled temperature and humidity for optimum food storage.  I lust for a real root cellar.  Hell, at this point I'd be grateful for a large closet.  Instead I run around the house with a thermometer looking for places to stash squash, sweet potatoes and apples that most closely resemble the storage requirements of those items.  Did you chuckle when I said under the bed?  That's where the sweet potatoes reside.


Goods canned in jars or dried are also problematic because there's hundreds of jars.  While my kitchen does have lots of cupboard space I'm vertically challenged, anything beyond the second shelf up is out of my reach.  The deep lower cupboards hold cookware, small appliances, bakeware but if something is shoved to the back, even on my hands and knees, shoulders straining against the frame, it's too deep for me to reach.  I so need those cool chrome slide-out racks but who can afford them?  The second problem with the canned goods is what did I preserve, how many did I preserve, and where the heck did I stash them?

I solved the what and how many problems earlier this year by setting up 3 files in MSWord titled Pantry, Freezer, and Refrigerator.  Each one is a two-columned table that lists the vegetable or fruit and beneath that lists the product, the size of the jar, followed by boxes that can be ticked off representing each jar. 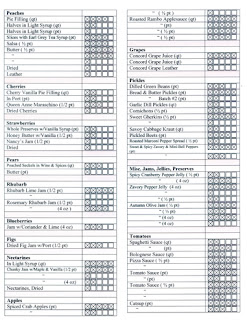 The next problem was the storage of those jars.  I found this old bookshelf and repainted it to match my cupboards thinking it would provide plenty of storage. 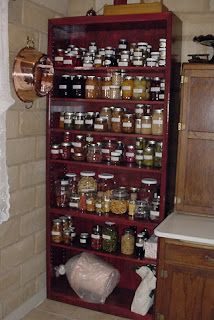 It did, but not nearly enough since we were set on putting up as much food as possible for this winter.  However, I was able to put a little of everything on it which made it easier to grab things at a glance for meals, desserts, and treats.  It still left the problem of where to store the bulk of the canned and dried goods.  The built-in pantry is small and holds staples. 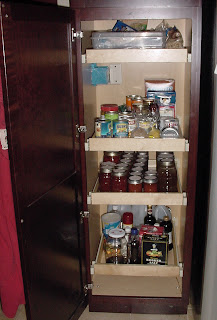 The garage and sunporch were out; too cold, sometimes freezing temps.  Our spare rooms are guest suites and common areas for the B&B.

I needed those lower cupboards for food storage so I finally bit the bullet and did some shifting.  All little used equipment got transferred to those upper shelves I can't reach.  Michael bought me a Franklin chair (one of those chairs that flips over to become a small stepladder) so I could retrieve things without climbing on counters.  Mostly.  Really little used items (mostly a result of gadgetmania) got donated.  Most of my lower cupboards were now free for storage.  I discovered that the lower cupboards were wide enough and deep enough to hold cases of jars two deep and two tall.  I could reach the cases in back and pull them forward.  I put sticky notes on the front of each case telling what and how many of each product was in the case.  The inventory and storage dilemma for canned and dried goods was solved and I could reach everything without a struggle! 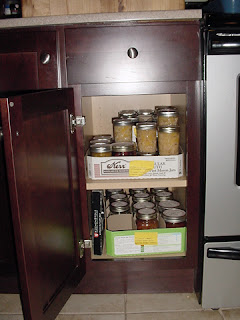 The current project is the foodstuffs we root-cellared.  I was pretty burned out from preserving when it came time to stash away fall crops that didn't require some means of preserving.  Whenever I found a spot with the right temperature for whatever I was stowing I put it there without making any notes.  So now I've created file 4: "Root Cellar", my current January project.  I've located, inventoried, and marked the apples and root veggies in the most protected part of the garage, the onions, shallots, and garlic in the laundry room, the squash piled in a basket in a cool corner of the kitchen, but I'm pretty sure I'm missing something and I fear only the coming of spring and the scent of decomposition will reveal what it was.
Posted by Rebecca... at 12:15 PM

Email ThisBlogThis!Share to TwitterShare to FacebookShare to Pinterest
Labels: organization