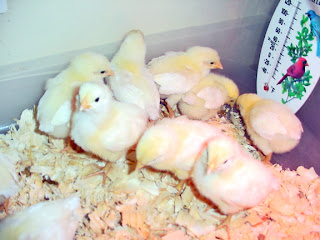 A few days ago around dusk I heard them kicking up a fuss and went downstairs to find them out of their pens perching on the mantel, the china closet, and any other tall available space they could wrap their birdy feet around.  The instinct to roost had kicked in!  "Okay," I told them, "You're big girls now.  Time to move to the big girls house!"  Thank god.  Brooding them in the downstairs suite wasn't one of our better ideas.

So off I went to the feed store to pick up several bales of pine shavings and a chicken feeder and fountain.  No more chicky sippy cups, you're eating at the adult table now!

I'm using the deep litter method of bedding in the coop.  It requires less maintenance and provides more insulation for the chickens.  In the fall I'll remove the entire bed, compost it, and start fresh and then again the following spring.  This was the method the previous owner of the coop used for her chickens and it was very successful.

After putting in the bedding I hung the feeder and the fountain at the chickens chest height.  This keeps the shavings out of both for the most part and saves on feed too.  A lot less poopy feed and water to be tossed.  These are the somewhat, uhm, less romantic, realities of chick raising.  I also hung the brooder lamps to provide a little extra heat for them since we're still having some mid-40F temps at night.  The pullets are fully feathered and will be all right but they have been living in a temperature controlled environment up until now.  I want to ease them in to outdoor life.

With the coop ready, I went back up the hill to the house, rounded up the girls into their tubs and clapped the lids on them.  They, along with their feed and grit, got loaded into the truck for the ride to their new home.  I unloaded the tubs into the coop and took the lids off allowing the pullets to check out their new home and come out of the tubs in their own time.  Meanwhile I filled their feeder and fountain and ran the cord to power the brooder lamps. 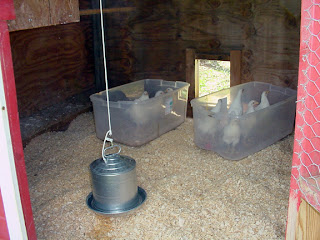 It took awhile for them to come out and explore, but once they did they were soon checking out every nook and cranny. 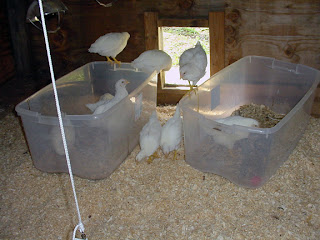 After the tubs were gone, they started running around like crazy and flying up to check out the roosts.  At one point I thought they were playing a pullet game, running after one lead chicken until I realized that she had found an earthworm while scratching in a corner (the coop floor is dirt)!  It was a game of keep-away!  I was quite impressed with her ability to run and choke down that worm at the same time.  Soon some of the other pullets found their own worms and bugs and they made it exceedingly clear that the grape halves we gave them for treats were ok, but bugs and worms are downright awesome!

During all these frolics the girls showed no interest in that brightly lit rectangle that leads to the great outdoors. They'd never been outside before.  Right then I understood the loophole about "free range eggs" and corporate chicken batteries.  If those chicks (like ours) were raised indoors, no matter how well lit, artificially or with sunshine through windows, their experience is dim light and they just won't explore going through that hatch and out into the world on their own.  This morning I set about coaxing them out.
They're first outing wasn't a total success.  One pullet would lift up first one foot and shake it followed by the other, as though touching real dirt and plants icked her out.  We had a collie with the same attitude about wet grass.  They pecked around for a bit, tasted some weeds and grass, and then headed back inside.  Whatever.  Later today I'm going to shoo them all outside and block the hatch so they get a little more use to the great outdoors.  It's sunny and warm today with rain in the forecast for the next couple of days.  I'm sure I'll have to start the process all over if they stay inside because of rain.
Posted by Rebecca... at 4:23 PM