While this post is filed under "Cooking Floyd", it's also about "Preserving Floyd" as well.  The spring cabbage crop is in.  Bess and K.C., the ladies who sell my herbs, had beautiful heads of cabbage at their farmstand last weekend.  We planted around ten heads in our garden this year and they are ready to go as well.  We planted five of a variety called "Stonehead" and five of a kind called "Golden Cross".  The Golden Cross were supposed to be mature at 40 days from planting which got us all excited to have a cabbage come in that quickly.  Michael and I are here to tell ya it just ain't so.  Both varieties came in at the same time, about 70 days.  But the Golden Cross cabbages are definitely tender and tasty! 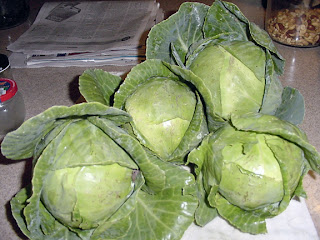 I love sauerkraut.  Michael doesn't.  But we both like cabbage rolls and that's how I preserve our cabbage.  It's also supper that day.

Cabbage rolls appear in some form in almost every culture and whether they're Polish, Russian, Irish, Dutch, or some other ethnic incarnation, I don't think there's a cabbage roll we haven't enjoyed.

Start by putting a large pot of water on to boil.  While the water is heating, remove the outer leaves from a head of cabbage and cut out the core from the bottom.  It's difficult to get the whole core out and you don't have to, just remove a good chunk of it.  When the water is boiling, carefully lower the cabbage head into it (try not to splash yourself!) and allow it to blanch for a minute. 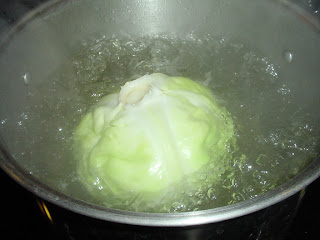 Lift the head out and allow it to cool until you can handle it.  The outer leaves will have softened and you can remove them whole. 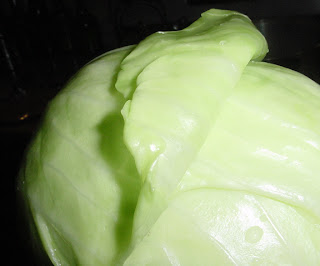 Remove as many leaves as have become pliable and place them in a colander to drain and cool. 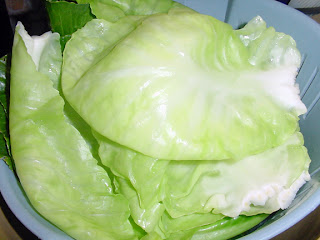 Repeat blanching and peeling the head until the cabbage leaves are too small to fill and roll.  Don't discard the centers.  They are still crispy and fine for uses both raw and cooked.

While the leaves are cooling, mix up the stuffing.  When doing a large batch like this I like to use a basic, well seasoned sausage to start.  After I have a tray full of "plain" rolls, I'll add some fresh chopped sage for the next batch.  After that I might mix in chopped cranberries and walnuts.  In the end I'll have several trays of cabbage rolls, each holding a different flavor of stuffing.  You can vary them any way you want by adding your favorite seasonings.
To do a batch for dinner, start with a pound of your favorite sausage and mix in a cup of instant rice.  I use instant rice because I continually had bad results with regular rice coming out undercooked and crunchy.  I use instant brown rice now anytime I'm stuffing something this way.  The amount of rice can be varied too.  If you want to really stretch your sausage, add more rice.  If you want it to be more meat-centric, add less. You can also go vegetarian or vegan with this and stuff the rolls with your favorite grain or soy stuffing. 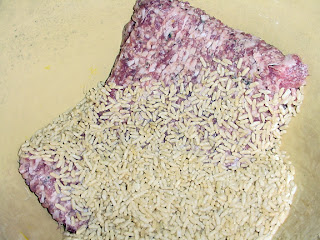 Mix the sausage and rice, and any seasoning additions thoroughly.
Lay one of the cabbage leaves with the base towards you and cut out the thickest part of the rib.  It'll come out like a little triangle (the chickens LOVE these!). 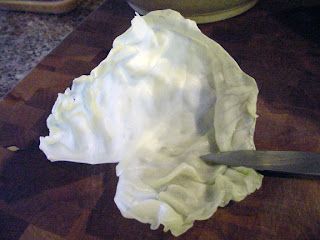 Next, place a generous tablespoon of the sausage mix just above the point of the triangle.  Use more for big leaves, less for small ones. 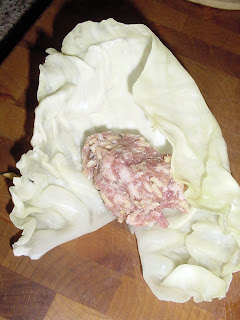 Fold first one side, then the other over the meat and give it a turn.  Then fold in the sides and roll into a little packet. 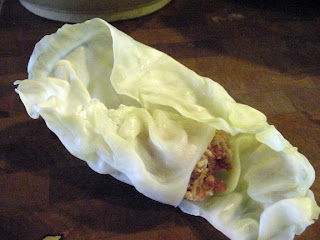 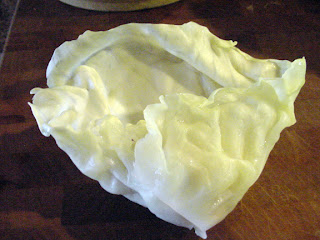 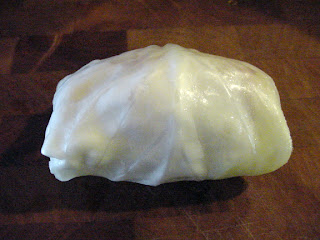 Don't worry about rolling them tight.  The filling is going to expand a little as it cooks.  Place seam side down on a tray and repeat until all the leaves have been rolled.

To cook them, pour a bit of tomato sauce, tomato juice, or spaghetti sauce in the bottom of a deep pot.  I used my home made pizza sauce this time because I made waaay more than we needed last year.  Lay in the rolls seam side down and layer if necessary.  Cover the rolls with more tomato sauce (or whatever your using) and bring to a simmer.  Cover the pot and turn down to a very slow simmer for an hour and a half.  These are great served up with a hard grated cheese, crusty bread and green salad.  Michael and I really like the rolls cooked in tomato sauce but don't be limited to that.  Chicken or vegetable stock are good choices too, especially if your filling has taken a decidedly Asian or Middle eastern swing.

To preserve them, wrap each roll tightly in plastic wrap and return to the tray.  When all the rolls are wrapped put the trays in the freezer and freeze until solid.  Remove from the trays and bag according to type.  Label, date, and return to the freezer.
Next winter pull out as many rolls as you want for dinner, unwrap them and follow the directions above, putting the frozen rolls directly in the pot.  Give them a few more minutes to account for their frozen state.

I also do this with peppers when they come in.  These are about as close to instant work-free winter meals as you can get and great for last minute dinner parties as well.
Posted by Rebecca... at 4:39 PM