Floyddate 6-6-11: Last fall we bought the 2.5 acres below us that came with a single wide trailer, a very nice chicken coop, an old shed that needs reclaiming, and a large garden area that had been plowed and grown on once and then let go.  We have a young family we're very fond of renting the trailer, we have our laying flock in the chicken coop, and we've started planting the garden.  I'll reclaim the shed later.
We're so far behind on the planting because of all the rain that I've become obsessive about getting things in while the weather holds.  Michael got the garden all tilled and hilled into ten beds, each about 4'x20' long.  He's planted two of the beds with Golden Bantam and Country Gentleman corn and has one reserved for edamame.  I've gone kinda berserk on the rest.

Here's the layout on paper with what's been planted so far: 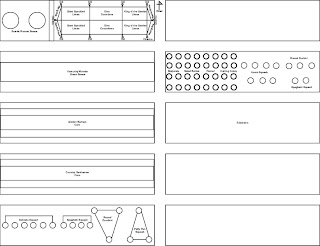 It's difficult to see but on the left from top to bottom is:
Bed 1: 2 tipis of Scarlet Runner Beans, a 3-part trellis of Giant Speckled Limas, Diva Cucumbers, King of the Garden Limas, all surrounded with companion plants of marigold, nasturtium, and dill. 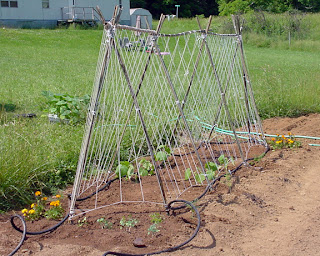 Update 6-13-11  Bed 1 is now fully planted with both tipis of Scarlet Runner beans and the addition of a large chunk of oregano transplanted from the house herb garden.  The lima beans are up and I started twining the cucumbers on their support strings.
Bed 2: 2 double rows of Kentucky Wonder pole beans.  Their companion plants aren't in yet but those will be more marigolds and coriander/cilantro. 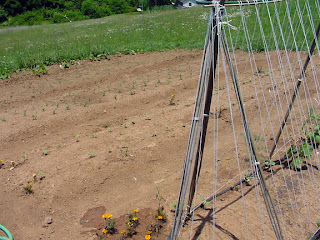 Update 6-13-11  Bed 2 has it's companion plants installed and the beans have made their appearance.  The above photo looks diagonally across the garden from the middle to bed 5.  Both beds (3 & 4) of corn have poked through.

Bed 5: Delicata squash, Spaghetti squash, Round Zucchini, and Patty Pan squash.
While we don't have them planted in the traditional way, corn, beans, and squash are all companions of each other and I'm hoping that proximity will have a beneficial effect on them. 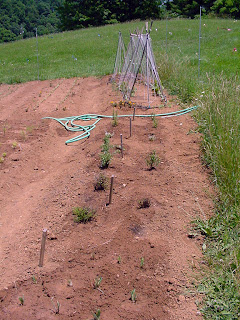 Bed 8 is reserved for edamame.
Update 6-13-11:  The edamame got moved to bed 9.  I planted all the peppers that I had in pots along the walk at the house into this bed.  There's hot cherry peppers, mixed hot peppers (Several varieties mixed together as seed.  Who knows what's in there.), and carnival bell peppers (mixed colors).  Now before you all go saying I shouldn't be planting my sweet peppers so near my hot peppers because of cross pollination, I know that.  But these are all hybrids so they wouldn't be seed saving candidates.  If they want to have inter-pepper sex that's fine with me.  The Marconi sweet peppers that we're picky about are up at the house garden in the convent, sorta.
Beds 9 & 10 are up for grabs.
Bed 9 has been reserved for edamame and bed 10 is still open.
Update 6-13-11:  We got the fence up over the weekend.  It consists of 10 foot sticks of 3/4" conduit driven 3 feet into the ground with 7' wide deer netting ziptied to the conduit.  This was the cheapest way we could fence the garden and is a variation on the hoops with netting and trellises we use in the house garden.  Unfortunately it all but disappears visually.  In order to let the deer and small children know it's there, I tied lengths of multicolored holographic Christmas ribbon to it at varying heights.  It looks very festive in a sparkly albeit slightly trashy way.  I've invited the toddler daughters of our renter to make more fluttery, flashy things to adorn the fence with and to warn the deer that it's there. 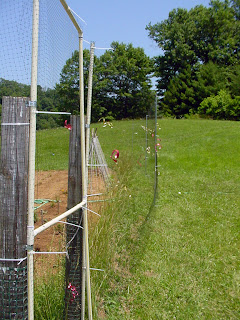 Floyddate 6-6-11: We've begun planting fruit trees too.  So far, just a Seckel pear and a Paw-paw but we have a few more up at the house awaiting planting.

My perennial herb beds at the house are in desperate need of division and replanting.  Due to the rain we've been unable to get the new herb beds tilled because getting the food crop beds done was more important.  I think along with the rosemary and curry leaf in bed 6, I'll start propagating divisions from the herb beds until the new additional herb beds are dug.  I have a notion of selling culinary herbs at the farmers market and a trial run last weekend was encouraging.  Expansion is definitely in order.  Also means less lawn to mow.  I don't exactly dislike lawns, but I absolutely hate mowing.  My ultimate plan is to fill the front yard with edible shrubs, flowers, and herbs with only enough space between the beds for the lawn tractor to get through.

Unfortunately there's lots of mowing to be done on the lower 40.  At some point we'll be adding livestock to help keep it down but just what is going to take some thought.  We've tossed around the idea of a couple of Dexter cows, a miniature breed that would provide us with milk and meat.  But even though they are a small breed they produce a lot of milk.  There's no way we could use up all the milk they'd produce even allowing for cheese, butter, yogurt, and ice cream.  I imagine there's legal ramifications surrounding even giving away raw milk.  Next we thought about goats.  Milk and meat on a smaller scale, but notorious for eating everything in sight.  Trees, shrubs, gardens, would have to be protected.  We're totally not interested in alpacas or llamas.  They're great lawn mowers and their poo is a superior fertilizer which requires no composting since it's considered "cold".  But beyond that they would be pets.  We'll probably raise 1-2 yearly lambs just to slaughtering size, and rabbits using the "chicken tractor" method, but really, how much lawn can bunnies eat?  Until we get this figured out it looks like we'll be spending way too much time and gas riding in circles.  Just like NASCAR.  But slower.  And even more boring.
Posted by Rebecca... at 3:45 PM