I came across Peppadews on the Mediterranean Bar at the local grocery store when I was living in Horseheads, NY and immediately became addicted.  Peppadews are a sweet, spicy, small red pepper that I've only seen in pickled form.  They were discovered in South Africa as a sport or naturally occurring hybrid.  Somebody realized the potential of these little beauties and patented the seeds and plants, making them unavailable for anyone who is "unauthorized" to grow them.  It's said that the fields where they are grown are heavily guarded, leaving one to wonder just what the big mystery of the Peppadew is.  That story can be read here.  I also had difficulty finding a photograph of a Peppadew plant or raw pepper.  There are lots of photos of the processed peppers. 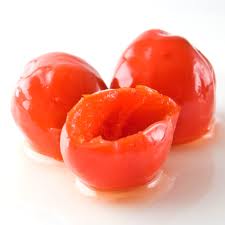 Since moving back to Floyd I've been able to find Peppadews in very expensive jars so I started a quest to reproduce faux Peppadews.

Last year I grew Zavory peppers, a hybrid pepper the size and shape of a Peppadew but said to have the flavor of a Jalapeno without the heat.  The Zavories were tasty in and of themselves but were totally devoid of heat and tasted nothing like a Jalapeno.  They did pickle nicely but were not what I was looking for.

This year I tried cherry peppers as a substitute.  Cherry peppers are a bit larger and thicker walled than a Peppadew but they are similar in shape, stuffable, and small enough for finger food.  They are mildly hot. 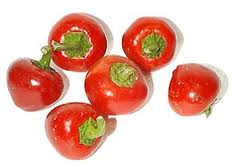 Pack the peppers tightly into the jars but don't crush them, along with the garlic, bay leaves, and spices. Leave a generous 1″ headspace at the top.
Ladle the hot vinegar mixture into the jars, leaving 1/2″ headspace.
Gently tap the jars on a padded surface to remove air bubbles and readjust headspace if necessary.  Wipe rims and adjust lids.
Process jars for 10 minutes (adjust time for your altitude).Cool, label and store.
This is my first time out with this recipe and really it should sit for a couple of months before tasting, but I tried a leftover pepper and I think the recipe could use more sweet.  Luckily my cherry pepper plants are being more than prolific and I'm going to double the honey in the recipe on the next go round.  The original Peppadews also had a smokey undertone that these are missing so maybe the addition of a few drops of liquid smoke is called for.