Foraging Floyd: Chicken of the Woods

Last Thursday there came a knocking on my door.  When I opened it, there stood a dark, curly-haired hobbit, a twinkle in his eye and hands full of mushrooms.  Ok, it wasn't a hobbit, it was Jagger.  But all the rest is true.  He had found a treasure trove of Chicken of the Woods mushrooms and was looking for a scale to weigh them out. 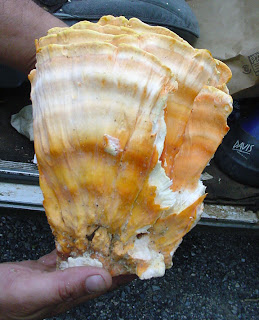 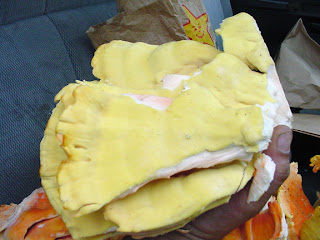 Chicken of the Woods or Sulpher Shelf mushroom ( Laetiporus sulphureus) is considered one of the "Foolproof Four" of wild mushrooms, nothing else looks like it.
Its prime growing season is August through September and flushes of the mushrooms are easily spotted because of their large size and bright color.  They grow on dead or mature trees, both hardwoods and conifers, but the mushrooms growing on conifers should be avoided.  Occasionally a person may have a sensitivity to Chicken of the Woods and those growing on conifers seem to accentuate that.  If this is your first time eating these mushrooms, try a small amount first. 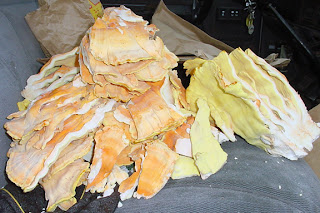 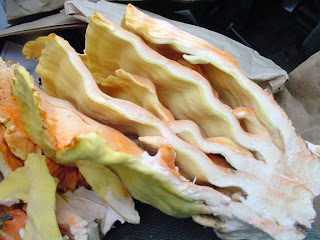 The mushrooms Jagger found were in pristine condition; young, firm, beautifully colored, with no sign of bugs or deterioration.  A quick rinse and a blot dry was all that was required.

This is the pound chunk that I turned into dinner. 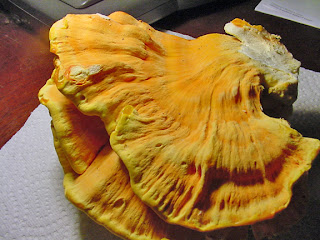 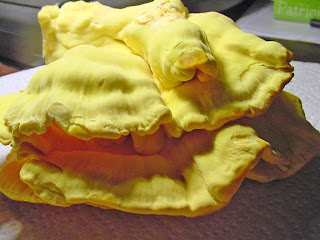 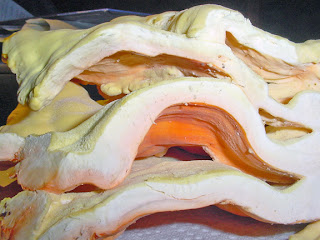 I envisioned a Pasta Carbonara-type dish, sauteeing strips of the mushroom in bacon fat, enhancing the meaty chew with smokey flavor.  But then I went to pick up fish for the week from Indigo Seafood and they had mussels.  Beautiful, fat mussels.  Mussels that demanded to be eaten NOW.  Faced with that and a large mushroom that needed to be eaten NOW the plan changed.  Oh, I still sauteed the mushroom in bacon fat but now there was a garlic wine sauce involved.

And while we're on the subject, don't throw out that bacon fat after breakfast.  Instead run it through a cheesecloth lined sieve into a bowl and allow to cool.  Then put it in an air-tight container in your fridge where it will keep indefinitely just waiting to be used in applications where it brings its smokey flavor to other ingredients in small amounts.  It, along with duck and goose fat, is one of those often wasted ingredients that we should make room for.  Not for everyday use and not for use in large amounts, but valuable for what they add to the occasional dish. 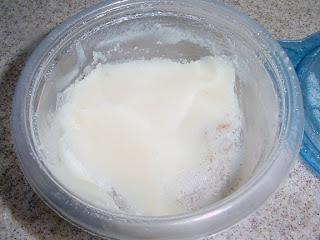 This was my ingredient line-up for dinner: 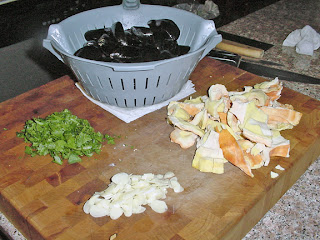 2 lbs of mussels, scrubbed and debearded  (discard any that are open and do not close when tapped)
1/2 lb of chicken of the woods, torn into strips (I dehydrated the other 1/2 lb )
2 tablespoons of bacon fat (or olive oil or butter)
several cloves of garlic, thinly sliced
1/4 cup flat leaf parsley, coarsely chopped
pinch each of salt and pepper
2 cups dry white wine
3 tablespoons butter

Bring a large pot of salted water to a boil and cook fettucine until it is just al dente.  Do this at the same time you start cooking the mushrooms and mussels.  Drain the pasta.

Melt the bacon fat over medium heat in a deep wide pot like a dutch oven .  Add the sliced garlic and gently saute it until translucent and just beginning to turn golden.  You may have to lower the heat because you want the garlic to give up it's flavor slowly and gently.  Add a bit of the parsley, the chicken of the woods strips, and the salt and pepper.  Saute the mushrooms for about 5 minutes.  The mushrooms will suck up the fat in the pan so if necessary, add a little olive oil just to keep things from sticking or scorching. 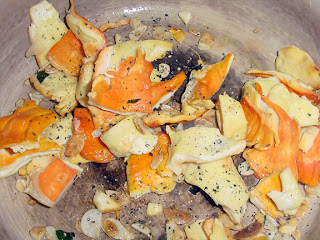 Next, drop the mussels on top of the mushrooms along with the white wine.  Give a stir and pop on the lid.  Simmer undisturbed for 5 minutes. 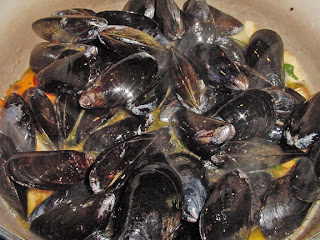 Remove the lid after 5 minutes.  The mussels should all have opened.  If they're not open yet, cover again and give them a minute or two more. 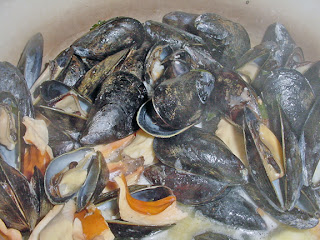 Stir the butter into the mussels and mushrooms.

Using wide flat pasta plates (or in my case, pie plates), divide up the pasta.  Ring the edges of the plates with the steamed mussels (discard any that haven't opened) and place the chicken of the woods in the center.  Pour the flavorful broth over top and sprinkle with the remaining chopped parsley.  Have plenty of good crusty bread on hand and/or spoons to sop up the broth. 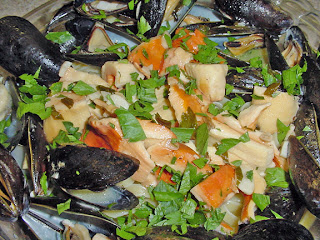