Preserving Floyd: Putting Up a Plethora of Peppers

The sweet peppers and ancho peppers are really starting to roll in!  Here's three ways of preserving them for winter use. 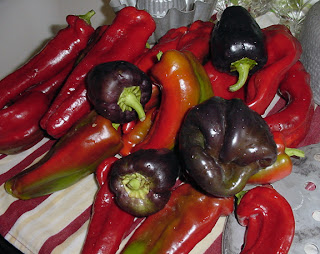 Diced Peppers
Easiest of all is slicing and/or dicing and freezing the peppers.  Any fresh peppers, hot or sweet, can be stored this way.  Wash, core, deseed, and remove the membrane ribs from the peppers (or leave the seeds and membranes for hot peppers).  Cut into strips and/or dice. 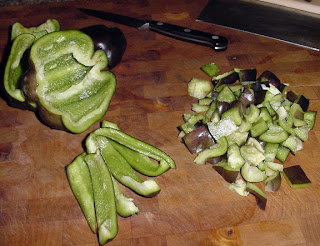 Spread the cut peppers in a single layer on a baking sheet lined with foil. 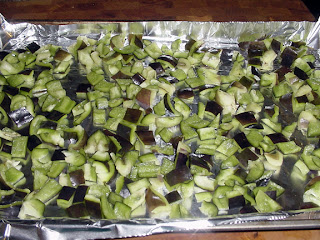 Put the sheet in the freezer until the peppers are frozen.  This only takes an hour or so.  Lift the edges of the foil to loosen the peppers and pour them into a freezer bag. 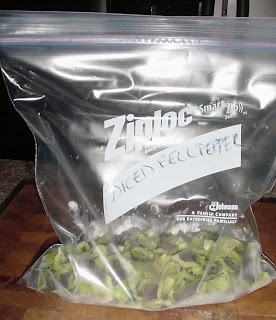 This is a great way to salvage peppers that are not so perfect.  Cut out disfigured areas and bug bites and discard, slice and dice the good parts and freeze.  I add to the frozen diced pepper bag as the peppers come in.

Individual pepper cups can be frozen for stuffing later as well.  Simply remove the stem, core and seeds and wrap each individual pepper tightly in plastic wrap.  Place as many as will fit in gallon freezer bags and place in the freezer.  It's easiest to stuff the pepper cups while they're still frozen because they will sag when thawed.  Since you'll be baking or roasting them anyway this isn't an issue. 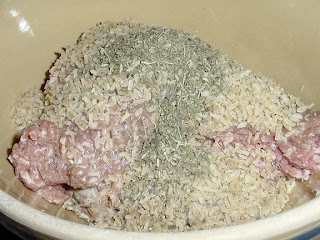 Next, cut the tops off your peppers and remove the seeds and ribs.  Then poke your knife in the bottoms a couple times.  This facilitates stuffing and allows excess liquid to drain from the peppers while cooking.  I'm using Marconi peppers here which are a long, conical sweet and a little difficult to stuff but so tasty when cooked.  Bell peppers are much easier to work with. 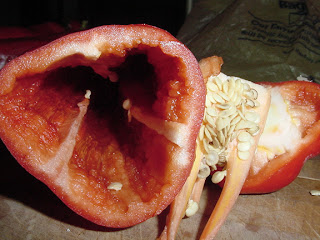 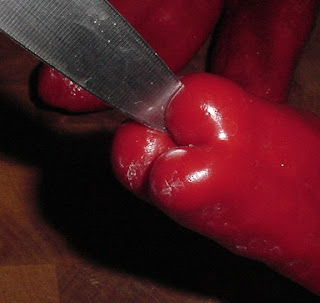 Work your stuffing into the peppers.  I put about 4 ounces into the Marconis but I don't fully stuff them.  They'd probably hold about 10 oz each if I did.  Depending on the size of your bell peppers, you can stuff them full or as full as you like. 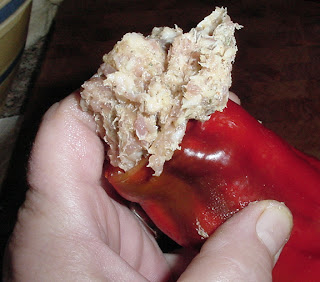 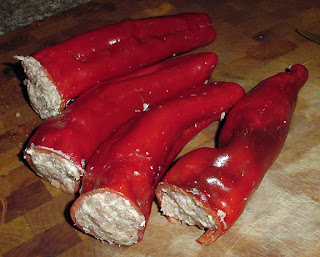 Wrap the peppers individually in plastic wrap and then store in freezer bags in the freezer. 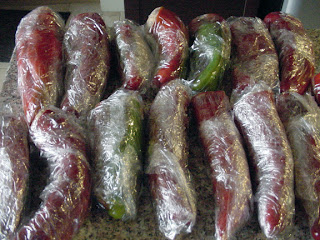 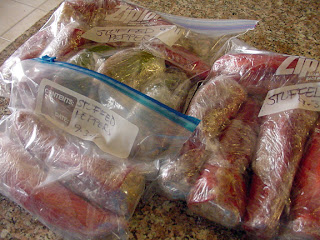 To cook the peppers place as many frozen peppers as desired in a lidded oven proof casserole or dutch oven.  Cover the peppers with a tomato pasta sauce, plain tomato sauce, tomato juice, or V8.  Heat the oven to 375F and bake until the peppers are tender and hot all the way through, about an hour and a half.  Or you can place the frozen peppers and liquid in a slow cooker set on low in the morning and have dinner almost ready when you get home in the evening.  Remove the peppers from the sauce and if the sauce appears too thin, heat it to bubbling on the stovetop and allow it to reduce.  Top the peppers with grated cheddar or parmesan if desired and serve with a salad and crusty bread for a quick, easy winter meal.

Roasted Red Pepper Strips
Roasted red pepper strips are nice to have on hand for adding to salads or pastas or pureeing to add to spreads or dips.  They're great as an addition to sandwiches too!  If you don't have a grill you can roast the peppers in the oven under the broiler.  Just keep a closer eye on them since the darken much faaster under the broiler.  These are best made with a thick-walled pepper.  I'm doing some Marconis here which are thin-walled and a pain and also some Anchos which are a joy to work with.

Heat your grill to a very high heat.  Mine runs between 500F-600F when I'm doing this.  When it's hot, place the peppers directly over the flames.
Close the lid but don't run off anywhere.  It takes a few minutes for the peppers to heat up and the first side to blacken but then it goes very quickly.  You're looking for the skins to blister up and char. 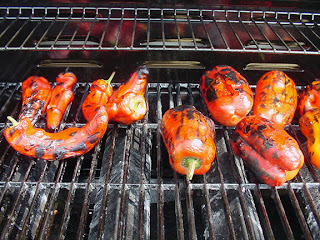 Keep turning the peppers until all sides are well blistered and charred, keeping in mind that thin-walled peppers will finish quickly.  Don't allow them to get too black or you'll lose the roasted flesh inside.  Thick-walled peppers are fairly idiot-proof.  As the peppers are done, put them in a closed brown paper bag to steam and cool. 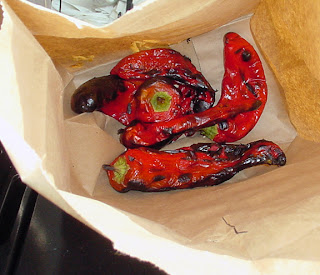 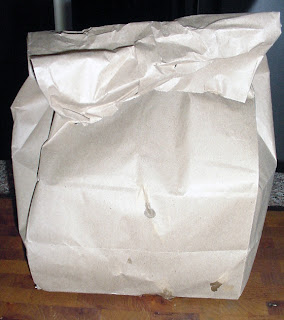 When the peppers are cool, peel off the charred skins. 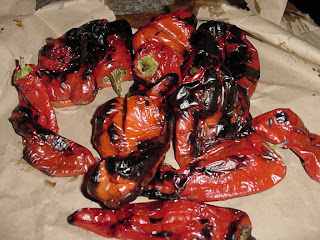 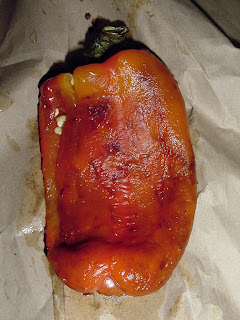 Remove the stem, core, and seeds, rinse, and pat dry.  Open the pepper, lay it flat, and cut into strips. 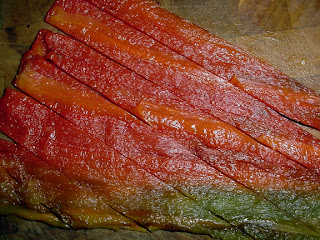 Toss the strips into a bowl, drizzle and mix with olive oil and allow to marinate at room temperature for about an hour. 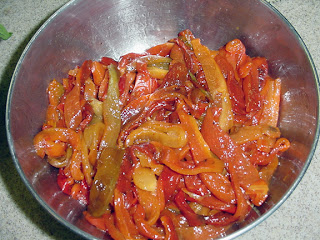 Pack into small freezer containers or snack bags, removing as much air as possible.  Label, date and store in the freezer. All these methods of preserving peppers are easy, don't take a lot of time or effort, and yield a big return.  Make a little room for peppers in your freezer!
Posted by Rebecca... at 10:36 AM