What Michael and I learned from the DDC (and other sources) about what we grow, what we eat, and how it's affecting our future plans and choices. 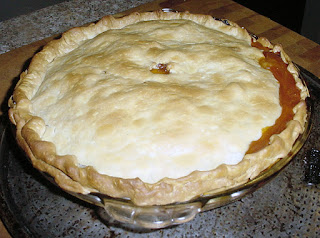 As we enter the final weeks of the Dark Days Challenge I've discovered that the majority of our dinners have become centered around not only local ingredients but our own homegrown and preserved ingredients.  All that work last summer definitely paid off through the winter.  Our goal was to become less reliant on the chain grocery store.  While not cutting the cord completely we were happy to find we were very much less reliant on the grocery store than expected.  In many cases, trips were made out of cravings for something we didn't need, could have made ourselves, but wanted NOW!  Sweets of a baked or ice cream nature usually being the culprit and always being a disappointment after the money was spent and the inferior, not homemade product consumed.

Probably the most profound change as a result of the DDC, food-related documentaries, and our own empirical observations is the lessening of meat in our diet.  We are omnivorous and we like our meat!  Michael is a hunter and I'm a pretty capable home butcher.  Part of our plans for this place was the integration of goats, chickens, ducks, and turkeys for meat, eggs, and milk.  Over the winter we found ourselves relying more and more on vegetable sources for our proteins and almond or soy milk for a lot of our fresh milk use.  This started as a response to some health issues Michael was having a few years back and a medication that seriously screwed with his GI system as a side effect.  Immediately after meals he would be wrapping his arms around his middle and gasping in pain.  He could handle vegetables better than meat so I began learning how to provide him with complete proteins by combining vegetables that complimented each other and rounding out the rest of the meal nutritionally.  Once off the medication we returned to our usual ways of eating.  Michael continued to suffer from severe heartburn and other annoying GI complaints but nothing like what he experienced on the medication.  We chalked it up to damage from the side effects.

But last fall, among other documentaries, we watched "Forks over Knives".  We were experimenting with Indian/Asian cuisine because we both really liked the flavor profiles.  Michael was learning to love beans, a veg he formerly avoided.  I joined the Dark Days Challenge.  We had lots of preserved fruits and veg on the shelves, in the freezer, and root cellared.  Somehow this vast change happened, crept up on us unawares.  We were eating tons more veggies.  We were making most of our own bread, cereal, pasta and other grain products, as well as salad dressings and condiments, all of which are huge sources of questionable ingredients, empty calories, and unnecessary sugars when bought off the shelf. The shelves and veg freezer were emptying rapidly.  Michael's GI troubles all but disappeared.  My glucose levels were getting easier to manage.  And I have a freezer full of meat.  Oh, we still eat meat but generally only once a week.  Mostly in soup form, on rare or special occasions as an entree, but as the daily main event not so much anymore.

So now we're rethinking our plans.  Just a week or so ago we were getting ready to put in an order for chicks, ducklings, and turkey poults.  Now, maybe not.  We've already made arrangements to have a total of 3 new beds, 30'x100' each, plowed up to be devoted to growing various types of dry beans.  The dairy goats were to be added in 2013 but now, ...now we'll see how this year plays out.  I don't think I can ever give up eggs and dairy.  I'm not sure I can give up chicken entirely.  A good chicken soup is food of the gods in my book.  Bacon?  That'll be tough.  Beef and venison?  Beef, no problem it's outta here.  Venison, I think we can get by on one deer a year.  Less spent on meat, buying or raising it, leaves more to spend on fish and seafood, a healthier and more easily digested protein for us than red meat.  Thanksgiving without turkey?  So not going to happen but it also puts the expense of a free range, responsibly raised turkey more within reach.  I would have been required to buy five turkey poults in order to raise the two that I actually wanted.  That would have been economically inefficient, huh.

So, in celebration of our near meatless status, here's two DDC meals containing meat!

Directions
Preheat the oven to 400F.  Line a large pie pan with half of the pie dough

If you are adding fresh or frozen vegetables to the soup, saute them briefly in a little oil in a soup pot to soften a little.  Add the venison vegetable soup and bring to a boil.  Turn down to a simmer and cook for 20 minutes.

Stir in the cornstarch slurry a bit at a time until the broth thickens to a gravy.  You want the gravy to be pretty thick so it doesn't run everywhere when the pie is sliced.  You may not use the entire amount of slurry.

With a slotted spoon, ladle the thickened soup into the pastry lined pie pan and cover with the rest of the pastry, sealing and crimping the edges.  Cut steam vents or a hole in the center of the upper crust.  Reserve and keep warm any gravy left in the pot to pass with the pie at the table.

Place the pie on a baking sheet and bake in a 400F oven for 45 minutes to 1 hour or until the crust is golden brown.

Remove and allow to rest for 15 minutes to a half hour before serving.

Halve squash lengthwise and seed, then cut crosswise into 1 1/2-inch-wide slices and season with salt. Roast slices, skin side down, in a shallow baking pan in middle of oven until tender and golden, about 50 minutes.  This can be done well in advance.  I often roast several squash at a time and cube, bag and freeze what I don't need for later.  If you have roasted squash in the freezer your cooking time will be considerably lessened.

Start risotto after squash has been roasting 40 minutes.  Bring broth to a simmer and keep at a bare simmer, covered.

Stir in 1/2 cup simmering broth and cook at a strong simmer, stirring frequently, until broth is absorbed. Continue simmering and adding broth 1/2 cup at a time, stirring constantly and letting each addition be absorbed before adding the next, until rice is creamy-looking but still al dente (it should be the consistency of thick soup), about 18 minutes total. (There will be leftover broth.)

Stir in squash pieces, then stir in cheese, salt, sage, and arugula and simmer, stirring, 1 minute. (If necessary, thin risotto with some leftover broth.)

Bring the leftover broth to a boil.  Drop in the thinly sliced breast and return to a boil.  This will only take a couple of minutes, the slices cook almost immediately when they hit the broth.

Spoon the risotto onto individual plates and garnish with poached chicken slices. 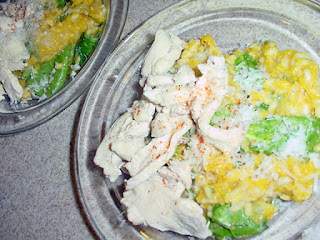