Bess and KC of Kester Clark Farm are my stall neighbors at the Floyd Farmers Market.  They had a flood of pickling cucumbers this year and just couldn't unload them all.  I became the lucky recipient of a peach basket chock full of these goodies and the dilemma of preserving them.  I was looking for fast and simple so I decided to try my hand at making crock pickles.

If you're from the Northeast and a member of my generation or older you may remember being able to buy a giant pickle pulled from a jar or crock that sat on the counter of your local deli or butcher shop.  Where I lived these were known as crock pickles or kosher dills.  If you lived in or near one of the big cities, especially the NYC area you might have known them as sours or half-sours.

Guided by Sandor Katz, I decided to make half-sours.  Most of my ferments are done in quart or two quart ball jars but for this I needed a much larger container.  Luckily I had picked up a 3 gallon jar at a yard sale.  You could also use a food grade plastic bucket which can often be obtained from a friendly local restaurant.  Or an actual crock if you're lucky enough to have one. 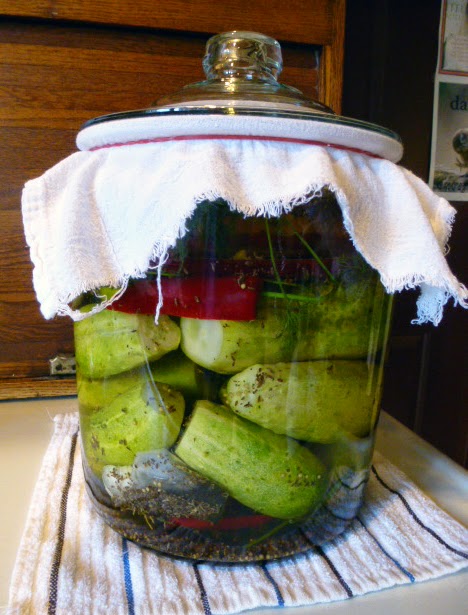 Except for the brine there was no real measurement of ingredients.  I used herbs and spices that appealed to me.

The first thing to do is make the brine. If you're using chlorinated tap water run enough water to generously cover your pickles into several large bowls and allow to sit overnight so the chlorine can evaporate out of it.  Or pick up a couple gallons of bottled water.  If you have untreated well water you're good to go.

Whisk the salt into the water until it's completely dissolved.

Next, wash and dry the cucumbers, then trim 1/8" off the blossom end.  There's an enzyme stored there that can cause the cucumbers to go hollow if it's not cut away.

Because our local hot peppers weren't in yet, I picked up 2 red chilies of unknown origin from the store, sliced them in half and removed the seeds and membranes.  If you like things hotter leave the innards intact.

A generous handful of fresh dill came next along with 2 heads of garlic, outer papers removed and cut in half.

Because crock pickles are being fermented in summer's warmer temperatures which speed both fermentation and enzymatic digestion, mushy pickles can be a problem.  To combat that add some grape leaves, oak leaves, cherry leaves, horseradish leaves or other tannin rich plant material.  I used two Irish Breakfast tea bags.  Must've worked - my pickles are crunchy!

Now carefully pour the brine into the vessel covering the cukes with a couple of inches of liquid. 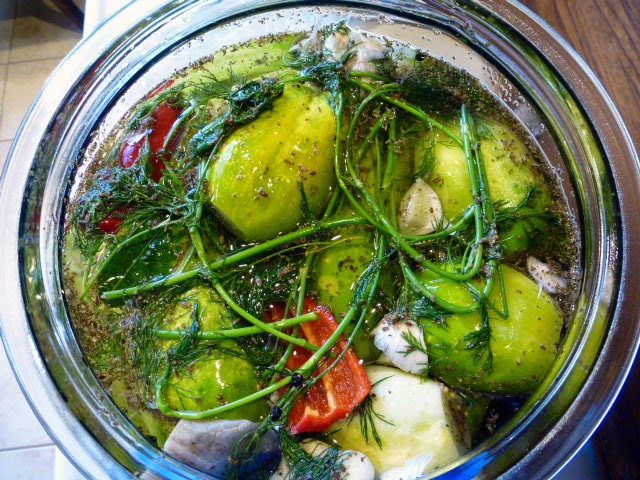 The cukes are going to float so hold them under the brine with a weighted plate.  I used a Ball Elite pint jar filled with more brine on top of a red plastic food storage container lid. 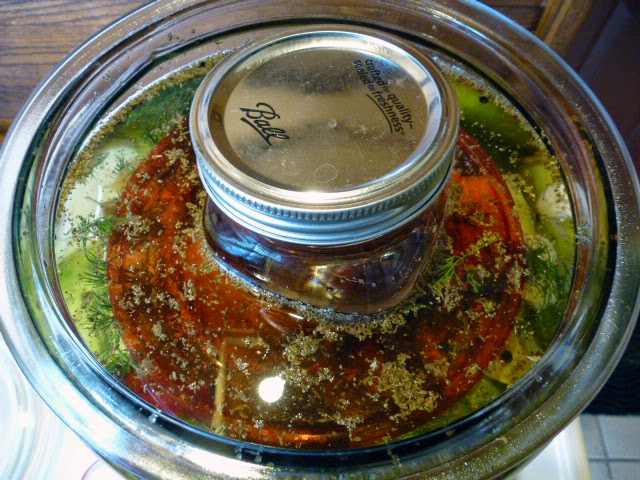 .
Finally, cover the crock with a woven cloth and secure it with a rubber band or tightly tied string.  This will keep dust and tiny flying critters out of you precious cukes. 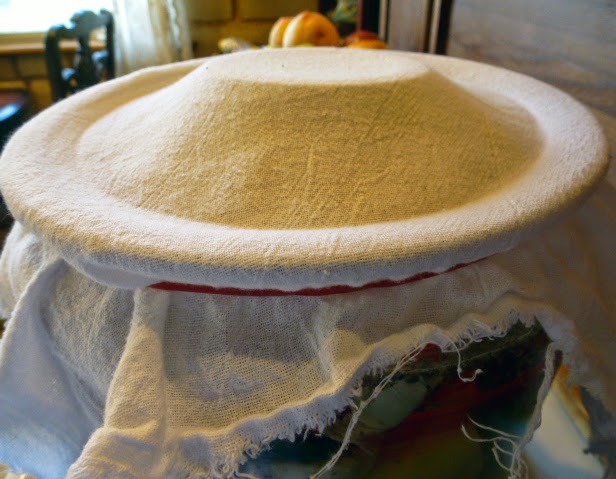 You can choose to put your crock in a dark place, cover it with a towel, or leave it on your counter.  Some traditions insist on fermenting in the dark, others say the UV rays help kill aerobic surface yeasts.  I left mine out and it did just fine.

In just 2-3 days at 70F temps I saw ferment activity.  Bubbles were rising to the top.  I took the cloth off every other day to check for scum and skim it off if there was any.  Throughout the 2 week ferment I had very little scum but skimmed what did appear.  If you should see heavy scum with streamers flowing down into your crock throw it out and start over.  Somewhere along the line you picked up a bad yeast or mold.  But some scum forming on the top is normal.  Skim it off and move on.

At the end of the first week I pulled out a cuke, sliced a piece of and tasted it.  It was mildly sour, crunchy but very salty with very little spice flavor.  I rinsed the brine off and tasted again and could detect the spices beginning to permeate the cuke.  I tasted a piece of cuke every few days until my desired level of sour was reached which for me was more than mild but less than puckery, approximately 2 weeks.  The interiors had gone from white to slightly translucent and the skin color had started to turn more of an olive green though still mostly bright.

At this point I divided the pickles into 3 jars - one for Bess and KC, one for another fermenting friend, and one for myself - divided the spices up amongst them and poured the brine through a fine strainer back into the jars.  Since these are live ferments I stored them in the fridge to put the fermenting activity to sleep.

I still find them to be a bit salty straight out of the jar but a quick rinse to remove the brine does the trick and I love the crispy herbal flavor of my first batch of crock pickles.  There's also the added bonus of pickled garlic and peppers to add to egg and potato salads and vinaigrettes!
Posted by Rebecca... at 11:30 PM