The first seed catalog for 2011 arrived in the mail over the weekend along with the first snow.  Last night Michael and I couldn't stand it any longer and we pulled out our box of seeds for inventory.  The catalog that came was from Totally Tomatoes and I just had to be the one to inventory our tomato seeds.

Last year we grew Amish Pastes, Principe Borghese, Red Currants, and an unnamed seed that had been handed down for at least 3 generations in the family of a coworker of Michael's that we dubbed "Smokey" after the coworker's grandfather.  All are open pollinators and indeterminate growers except for the Principe Borghese which are semi-determinates.

Here's photos of the tomato terraces from June 2010.  By the end of that month the harvest started coming in so fast I didn't get any more pictures taken!


What you can't see from the photos is the vines are laden with fruit beginning to ripen.  If you look closely at the front view near the bottom you can see flecks of red.

The Smokies were an awesome tomato.  They produced softball-sized and larger fruit in a variety of shapes that made it impossible to identify their parentage.  Some were shaped like Brandywines, some looked like Beefsteaks, some were ovate with a pointed blossom end like a paste.  But all were meaty, nearly seedless and lusciously sweet.  The vines produced heavily and the weight of the tomatoes started pulling the stakes over.  I did a good bit of reinforcing, tying up and pruning with these.  There were many, MANY lunches of thick sliced Smokies laid on home made wheat bread and slathered with fresh home made mayo!  One of our favorite suppers was a cored Smokey stuffed with bread crumbs, basil, slivered garlic, salt and pepper, drizzled with olive oil and topped with shaved Parmesan, then roasted at 400F until the tomatoes began to sag.  Then they were placed on top of a bed of fresh fettucine that had been tossed with garlic softened in a little more olive oil.  When you cut into the roasted tomato the juices flowed and combined with the stuffing and cheese to make your very own personal sauce right there on the plate in front of you!  Unbelievably simple, fresh and so good!  Seed inventory showed that not only do we still have some seed from the original batch but also a good bit from the ones we grew.  YAY!  These are definitely going to be grown next year.  Also, Michael's coworker got shipped off to Afghanistan before he could harvest and save seed so we may be the only ones able to restock his supply when he gets home.

The Principe Borghese is an Italian paste type tomato developed for sun drying.  Larger than a big cherry tomato but much smaller than an Amish Paste which they resemble, these too were bountiful producers.  Also very sweet they were fun to snack on in the garden with a basil leaf.  My main purpose with these was to cut them in half, sprinkle with garlic and a mix of basil, oregano, thyme, parsley and a touch of rosemary, s&p, a generous drizzle of olive oil and then roast them in a 250F oven until they were soft, concentrated and caramelized a little.  Once cooled they were divided into snack-sized plastic bags and frozen for use in all sorts of things: chopped into vinaigrette, laid on antipasta platters, topped on pizza, and whizzed into a pesto-type sauce or dip.  They also make a mean crostini, laid on top of a smear of chevre!  I also halved and dried several full dehydrator loads of these and, inspired by Joel and Dana over at Well Preserved, marinated a load over night in cider vinegar and maple syrup and then dehydrated them.  Awesome.  Absolutely awesome.  They truly are the tomato bomb!

Red Currant tomatoes are touted to be as close to the original wild tomato as you can get.  They definitely grew like weeds, vining and running all over the place before I got them reined in!  They were easy to grow and seemed to be pretty resistant to common tomato pests and diseases.  The fruits grew no larger in diameter than my thumb nail and were quite thick skinned.  The flavor is bright and tart. These little buggers attracted everybody, especially little kids, picking handfuls and popping them down just like berries!  They ripened on trellises of 8-12 fruits and a trellis of them floated on a bowl of gazpacho or laid on a plate made an attractive garnish.  I also canned these whole with dried herbs and thin lemon slices, and made sweet and spicy whole tomato preserves.  I dehydrated them by nicking each little tomato, then dried on the racks at 135F.  I had to keep checking them and they took two full days to dry but in the end I had tomato raisins!  At first chew they seemed to be a disappointment but as I munched them my mouth filled with a sweet concentrated tomatoey flavor!  What a surprise!  We snack on these but they're also great tossed in with braises, sauces and soupy things and allowed to reconstitute.

Amish Pastes.  The classic heritage sauce tomato.  I use to grow Romas but planted these one year when I couldn't get Romas and have never looked back.  Large, fragrant, meaty with a deep rich tomato taste, these are my go-to tomatoes for all kinds of sauces: spaghetti, pizza, plain, conserva, and roasted.  I can count on them. 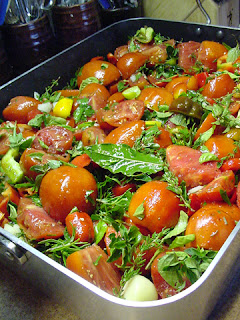 This was a combination of all the tomatoes we grew along with our own herbs, sweet peppers, onions, garlic and bay leaf ready to be roasted down into the last batch of sauce for the season.  Our shelves are stocked with tomatoes in many wondrous ways to see us through the winter and here I am dreaming about the first ripe warm bite of next year's crop!

Email ThisBlogThis!Share to TwitterShare to FacebookShare to Pinterest
Labels: tomatoes