I'm skipping back a holiday on this post to talk about the Extreme Deep Dish Apple Pie we had for Thanksgiving (and the Pre-Thanksgiving Practice Potluck, and the initial I-wonder-if -I-can-do-this experiment). 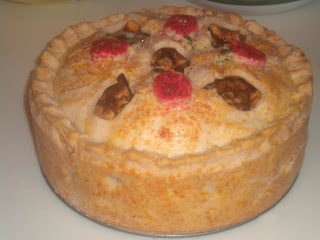 Michael loves deeply spicy, tender, baked until translucent apples. So much so that he asked me to come up with a canning recipe for them so he could put pint jars in his lunch bag.  The result was something he lovingly calls "Apple Crack".

When it comes to pastry I'm pretty much a rookie.  But I can make a normal, presentable, and tasty apple pie.  But here is where it all went weird...

I like Johnny Depp and Helena Bonham Carter movies.  I've loved the shape of what I've come to think of as the British straight-sided pie shape used for meat pies (I think).  Sure enough, there in "Sweeney Todd" sitting on the table next to Helena are those very pies.  I'm pretty sure it's not apples in those pies.  But there it was, the inspiration.  How do they do that?

I had loads of apples for experimentation.  I got turned on to an abandoned orchard back in September that was literally rolling in fruit.  Beautiful apples for not having been tended in over a decade.  The hoarder in me took over and after drying, saucing, pie filling, apple cracking, spiced rings making, and wrapping and storing I still had most of a bushel left.  I dug through assorted pie pans, molds and other bakeware and pulled out a 9" springform pan.  Good enough.  I had one a size smaller and in the future I'll use that because the 9" makes a HUGE pie.

The recipe I adapted for the pastry came from "The Better Homes and Gardens Cookbook", page 382.

Place the steel blade in the food processor.  Add the flour, cayenne and salt and pulse once or twice to mix.  Add the cheese and pulse to mix.  Add the shortening and pulse until the mix resembles cornmeal.  With the processor running add the water all at once.  Stop and scrape down sides, then pulse twice more.  Remove the lid and pinch the mix.  It should pinch together and hold without being sticky.  Dump it out on your work surface and bring it together forming a disk.  You don't want to work it too much, just squish it into shape, wrap in plastic and refrigerate while you're preparing the apples.  Make two batches of this.  One will line the springform, the other will be the top crust. Spray or oil the sides and bottom of the pan and wipe off the excess.

Mix the sugars, Clear Jel, and spices together in a bowl.  Mix the maple syrup and extracts together in the measuring cup.  Set aside.

Now prepare your apples.  It really helps to have one of these gizmos when you're prepping large quantities of apples: 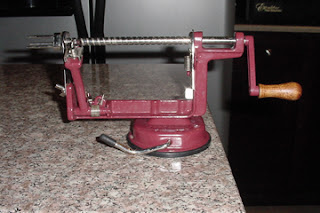 Because this is what it does 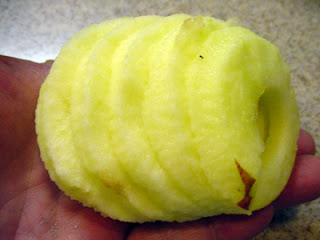 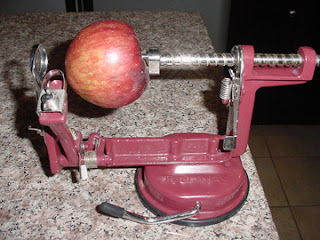 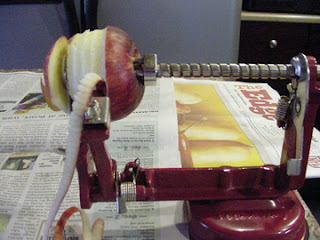 And if you're really industrious and frugal you can save the peelings and cores to make apple pectin.  But that's another story.

Once you have all your apple slices in a big bowl, toss them with the sugar mixture, coating the apples thoroughly.  Pour on half the syrup mixture, toss, and repeat with the other half. Set aside. 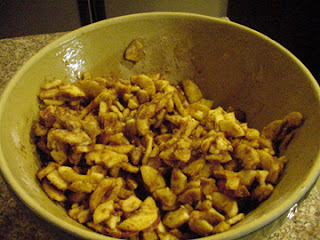 Turn on the oven to 375F.  Now, get out one of your dough disks and roll it out on a floured surface to a circle large enough to cover the bottom and sides of the springform and leaving a generous lip hanging over the edge.  Roll it slightly thicker than you would for a regular pie crust.  It's going to need a little architectural strength.  When you fit it to the springform make sure the dough lies flat on the bottom and into the angle of the wall.  You may have to pleat and patch the dough to make it lie smooth on the sides and over the lip.  There should be plenty to do this. 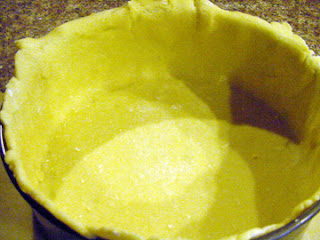 Pull out your second disk of dough and roll it out a good bit larger than the diameter of your pan.  Set the pan on top of it to leave an impression, remove the pan, and then cut about an inch, inch and a half border outside the mark. 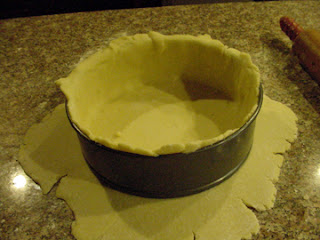 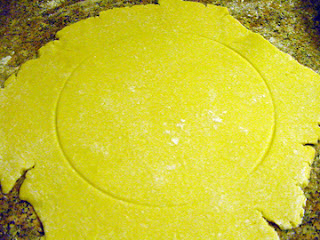 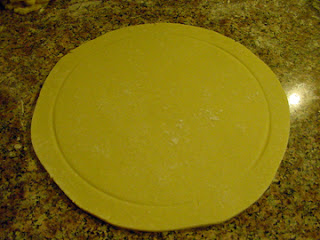 At this point I cut steam vents into the dough with a mini apple cutter, reserving the cut-outs for decoration (but you can wait until the crust is on the pie and slice in your vents then). 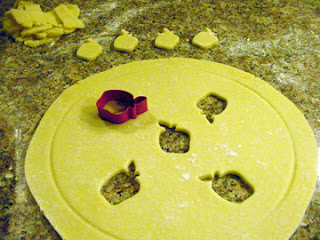 Dump your apples into the dough-lined springform now.  Pack them in there firmly, leveling them out.  There should be enough apples to come even to the top edge of the pan and a little above it in the center.  As the apples bake, they collapse a little.  Not enough apples and the top crust will fall in.  Roll the top crust over the rolling pin, then line up the circle impression with the edge of the pan and unroll the dough over the apples. 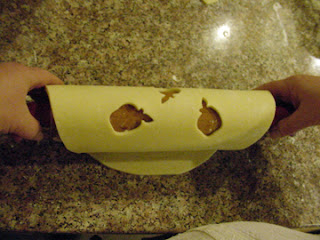 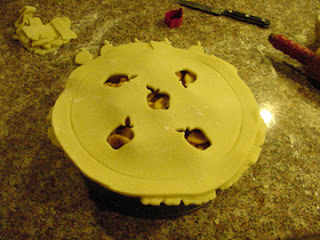 Pinch the top and bottom crusts together so they stand straight up and then trim to a uniform 1". 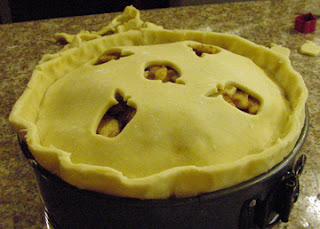 Fold over and crimp the dough toward the center of the pie away from the edge of the pan.  When you remove the band after baking you don't want the edge crimped on it. 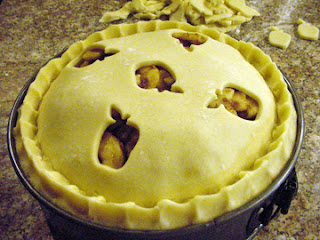 Next I decorated my apple cut-outs with red sanding sugar.  Just sprinkled it on, lightly pressed it in and tapped off the excess.  Then I painted the top of the pie with an egg wash, placed the cut-outs on and sprinkled the whole top with large grained decorative sugar. 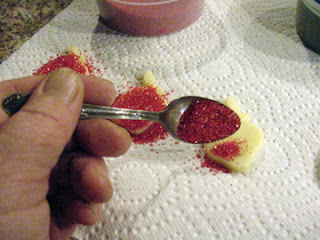 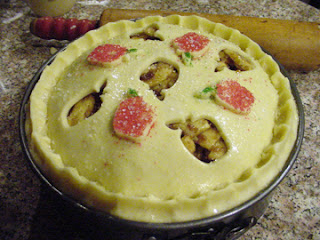 Place the pie on a baking sheet (just in case you have pie failure) and place in the oven to bake for approximately an hour and 15 minutes.  The time will vary depending on the type of apple you used (I used a mix) and the thickness of the slices.  I start testing it at an hour by slipping a small paring knife through the vent and into the apples.  When the knife doesn't meet any resistance the pie is done.  If the crust is getting too dark while baking, lay a sheet of foil loosely on top.

Remove the pie from the oven and set it on a rack to cool.  Allow it to cool completely before attempting to remove the springform band.  This is important.  It allows the crust to contract away from the band.

Once cool, run a long, thin bladed knife between the crust and the band all the way around the pie.  I use a fillet knife.  Take your time doing this, it's a little scary.  Now.  Take a deep breath.  Gently release the band clasp slowly, controlling it until it is fully open.  Don't allow it to snap.  When the clasp is open, the crust should have fully released from the band.  Grasp the band from the top and carefully, slowly, lift it straight up.  You may have to wriggle it a little.  Take your time.  TA-DAAA!  If anyone's been watching this step the band's removal usually elicits oohs, aah, and applause!

Use that sharp, thin-bladed knife to slice the pie.  The crust is surprisingly sturdy and you will be able to serve tall stately wedges of cinnamon-maple laced apples in a surprisingly flaky, lightly cheese-flavored pastry.