This post, unfortunately, is an example of not buying local.  It is an example of in season and putting up in bulk.  Citrus doesn't grow around here.  We've not weaned ourselves enough to give up citrus totally and the greenhouse we will attempt to grow citrus in is still a daydream.  However, citrus is in season.  And citrus is at it's cheapest and most available now between Thanksgiving and Christmas along with cranberries.
Just before T-Day, armed with coupons and having compared store prices I headed out to the store offering the best prices on Clementines and cranberries.  I purchased twelve bags of fresh cranberries and two crates of Clementines.  Clementines are a member of the Mandarin Orange family and my mission was to put up half-pint jars of segments and make Clementine Orange Dust which I use as a spice in baking and cooking.  The cranberries I generally freeze as is to use throughout the year in various ways but I also wanted to attempt to dehydrate them into "craisins".  We recently identified a spot on our land that we think would be conducive to growing cranberries and if I can make acceptable dried cranberries we'll invest in planting some bushes.

First up: Cranberries.
Having done research on the web it appeared the best way to prepare the cranberries for the dehydrator was to poach them in a syrup made from a ratio of a 3/4 cup of sugar to 1 cup of water.  I wanted enough of this syrup to cover the cranberries (two 12 oz bags) so I multiplied that by 6 which was 4 1/2 cups of sugar to 6 cups of water.  I put the sugar and water in a large, heavy, non-reactive pot and brought it just to a boil.  Then I dumped in the cranberries and allowed them to boil for 1 minute, then immediately removed them from the heat.  This allowed the skins to burst but didn't allow the berries to overcook.  The cranberries then steeped in the syrup for 30 minutes.  (Whether you choose to sweeten the cranberries or not it's important to either slice them in half or blanch them in water to burst the skins.  If you just stick them in the dehydrator whole you'll end up with hard red marbles.)  Steeping allows the syrup to penetrate the berries and sweeten them.

After 30 minutes I removed the cranberries with a slotted spoon to a colander and allowed them to drain while reserving the now rich red cranberry syrup in the pot for another use.

I spread the drained cranberries on the dehydrator sheets, set the temperature for 135F and the timer for 8 hours.  Total time for drying was estimated at 16 hours.  Setting it for 8 reminded me to turn the trays and check the progress.
After a total of 16 hours I did indeed have dried cranberries that rivaled the store-bought product.  In fact, Michael and I thought these were better because they were decidedly less sweet than the store-bought "craisins" with a better balance of tart/sweet.  Doing a price comparison though showed no advantage to dehydrating purchased fresh berries as opposed to buying the name brand "craisins".  I ended up with 12 oz of dried cranberries from a start of 24 oz of fresh cranberries (about $3 worth).  I can buy 12 oz of name brand dried cranberries at my local dollar store for $1.75.  The ingredients in the name brand appear to be the same as what I put in at home.  However, once we have our own cranberry bushes planted and producing it will be worth the little effort it took to make "craisins" at home.  I do intend to try one more batch using our honey or maple syrup as the sweetener.  If those work it would make our dried cranberries even more local than sweetening them with white sugar.

On to the Clementines!
The next project was canning Clementine segments. Clementine segments are found in the grocery stores as canned Mandarin Orange segments.  These often run over a dollar a can for name brand products that contain perfect little orange segments.  You can also get them for under a dollar at discount food stores but the segments are often broken up and somewhat mushed.  I followed Marisa's directions on her blog "Food In Jars" with the twist of using that beautiful red cranberry syrup as the canning liquid.

The first step was to peel, remove as much membrane as possible, segment, and pack the Clementines into half-pint canning jars.  When these oranges are prepared commercially they are soaked in a bath of food grade lye to remove the membrane.  I don't have a problem with this as lye has been used and has been essential in the preparation of some foods for centuries.  Hominy is one example.  But some people are icked out by the thought.  I found the oranges very easy to clean by gently brushing them with a vegetable brush and pulling the little threads right off.  No, they don't look as pristine as a commercial segment but they looked fine. 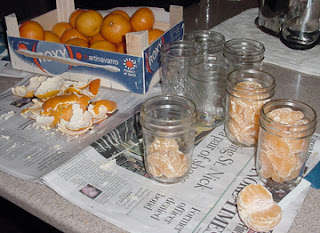 I wanted a very light syrup on the segments so I added 8 cups of water to the cranberry syrup I already had and brought that to a boil.  I ladled that into the jars leaving 1/2 inch of head space.  I ran a small spatula around the sides of the jars to release air bubbles, added more syrup as necessary to maintain the head space, and wiped the rims clean.  Then I applied the lids and processed them in a water bath at a boil for 11 minutes. The time is adjusted for my altitude of 2,300 feet above sea level.  Sea level timing would be 10 minutes.  I got a total of 13 half-pints from a box of Clementines.  I paid $3 for the box and repurposed the syrup from the cranberries.  My guesstimate is the 13 jars cost me approximately 25 cents a piece as opposed to over $1.00 a can for the name brand equivalent.  Definitely worth my time!
The last project was Clementine Dust...
I followed Gwen Ashley Walters' tutorial "Mandarin Orange Dust" and actually ended up with three different products.  I love using this dust to mix into rubs for pork, chicken, and fish, or to mix into or dust on baked goods.  But I also ended up with a good amount of rougher dried peel and beautiful stained glass-looking dried orange slices for garnishing or just plain snacking on.  In fact, I may run out and get another box of Clementines to dry into just the slices that's how tart/sweet tasty they are!

As with the other projects, this was pretty simple.  The oranges were sliced as thin as possible.  I did this by hand because I don't have a nifty mandoline and the food processor mangled the one I tried to slice with it.  Make sure your knife is extremely sharp and this isn't a problem, your slices just won't be precisely uniform.  I laid them out on the dehydrator racks and dried them at 135F until they were crispy.  It didn't take long, about 4 hours.  That's when I discovered that the dried slices were very pretty and tasty as well!  Because I had to know!  I had to taste one!  So I saved the most perfect slices for future garnishes (and snacks!).  I roughly crunched the rest of the slices up and put them in the food processor fitted with the metal blade.  I added a scant 1/4 cup of vanilla sugar (sugar that I've stored whole vanilla beans in) and a tablespoon of kosher salt.  I pulsed the FP a few times and then let it whiz for a minute or so.  I checked the consistency and whizzed it some more.  It's important to check the consistency frequently to be sure you're heading in the direction of powder and also to allow the contents to cool down a bit.  A little heat gets built up in there and with the sugar it will gunk up on the tips of the blade.

Finally, the majority of the contents was at the dust stage that I wanted.  I placed a fine sieve over a bowl and sifted the orange dust through it.  The larger bits of peel I saved for other uses and the fine dust went into its own jar.
That's how I ended up with Clementine Dust, Wheels, and Dried Peel!

Last night I mixed together a tablespoon of the dust, a healthy pinch of cayenne pepper, a tablespoon each of honey and soy sauce, and a generous drizzle of sesame oil.  I spread that on two salmon fillets, generously sprinkled them with sesame seeds laid a few wheels across the top and shoved them into the oven to bake until they were just done, still translucent in the center.  The wheels softened and took on the shape of the fillets and the flavor was just spicy warm, citrusy, truly complimentary to the flavor of the salmon.
Posted by Rebecca... at 1:28 PM