Citrus.  Again.  I warned you somewhere back in December that winter is Citrus season.  Thus, this third post on the stuff.  I'm ready for asparagus and strawberries and new peas, tender greens, flowers.  I'm sick of citrus.  Uh, sorry.  That's the cabin fever talking.

This Spice Rack Challenge is all about using citrus as a flavoring or a spice instead of enjoying it in it's more juicy, fruity form.  To do that I'll be using Clementine Dust from the "Of Cranberries and Clementines" post and Single Malt Marmalade from the "It's Marmalade Season!" post.  The star is a beautiful piece of salmon procured from Indigo Farms Seafood of Floyd. 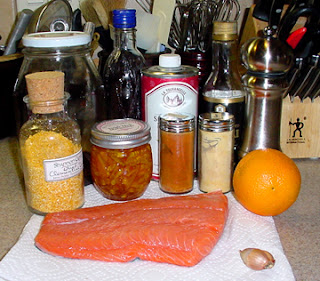 Some of the other players in this show have their own stories.

There's a dab of honey from my friend Robin Hood-Knight's (I love her name!) husband's hives.  Robin and her husband live just south of Charlotte, NC.  When we lived there they had just bought a beautiful piece of undeveloped land near Asheville and were planning on camping on it for two weeks in a pup tent.  Having done some extended stay camping myself I convinced Robin that they would be much more comfortable in a larger two room tent and offered her a spare that we had.  She talked about investing in one and since mine had only been used once before our boys moved out I told her to take it and if she liked it we would work something out.  She did, and they did, and they offered a 5 gallon bucket of honey in trade for the tent.  That was nearly ten years ago and I'm still working my way through that bucket!

There's a tinsch of vanilla extract in the mix.  If you're buying those exorbitantly expensive vials of one or two sad, dried out vanilla beans from the grocery store, STOP!!!!  I buy mine from Vanilla Products USA where I can get a pound of beautiful, soft, sticky beans for $23.  There's about 120 beans in a pound and at that price you can do a lot of playing and experimenting with vanilla.  To make vanilla extract, slice open a dozen or so beans and drop them into a bottle of high proof vodka.  Hide it away for about 2 months to steep and you'll end up with a ton of fragrant real extract for a fraction of the store price.  When that's gone pour more vodka over the same beans and steep again.  I keep two bottles going: one in use and one steeping.  Pretty little bottles of home made extract make great gifts too!  Ditto with vanilla sugar.  Bury a few beans in a large jar of granulated sugar, allow to sit for a week and then it's ready to use.  When it's gone just pour more sugar over the same old beans.  I also make vanilla honey using the extract method.

There's a small minced clove of shallot in the mix that started it's life in our garden last spring.  Grow your own shallots!  They're also way over priced in the stores and so simple to grow.  If you don't have a garden you can grow lots of them easily in a large pot.

The basil for the garnish grows through the winter on our seed starting shelf described in the "Plant a Seed" post.

Also in the mix is a pinch of cayenne, a tablespoon of ground ginger, a quarter cup of toasted sesame oil, three tablespoons of Tamari sauce, a couple of grinds of white pepper, the juice of one orange and a sprinkle of sesame seeds.

I just winged this recipe with approximations, no real measuring.  To start, stand an open gallon plastic bag in a bowl.  Into this bag squeeze the orange juice and add all the other ingredients except the marmalade, sesame seeds and basil.  Give it a good stir to combine and then slide in the salmon.  Zip the bag shut while expelling the excess air and then gently massage the marinade onto the salmon.  Put the fish, bowl and all (to prevent any leakage) into the fridge to marinate for at least 30 minutes up to a few hours.

When you're ready to cook turn your broiler on high to heat and heat up a cast iron or other oven proof saute pan on the stove top.  You want the pan to be good and hot before you put the salmon in.  Place a generous spoonful of marmalade in a small pot and gently warm until liquidy.  When the pan is hot just shine it with a high smoking point oil like peanut.  Meanwhile, remove the salmon from the marinade and blot it dry.  Lay the fish flesh side down in the hot pan to sear.  Don't poke at it, you want it to come away with a nice brown crust.  In maybe three minutes the salmon will release from the pan and you can turn it onto it's skin side.

After you turn the salmon, spread it with the warmed marmalade, sprinkle generously with sesame seeds and place pan and all under the broiler to finish to your desired degree of doneness.  Then pull the pan and allow the fish to rest on the stove top while you chiffonade the basil.

To cut basil chiffonade, pull the leaves from the stem, stack them and roll them up like a joi... I mean a cigar.  Thinly slice across the cigar.  Toss the slices and you'll be left with thin ribbons of basil.  Do this at the last minute to prevent darkened edges on the ribbons.


Plate the salmon, sprinkle with the basil chiffonade and serve with your choice of sides. 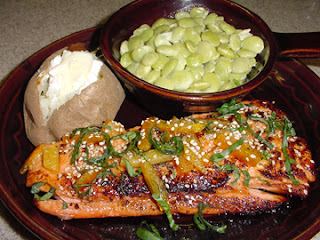