The herbs aren't the only green things unfurling in the perennial beds.  The weeds are sprouting too.  I was attempting to get a jump on them the other day and realized part of what I was tossing was good greens.  Dandelions!  The lettuce tub has been knocked off the indoor shelf by other seedling tubs and the lettuce in the garden isn't big enough to cut yet so we're in between for greens.  I started throwing the dandelion rosettes in a pile to be cleaned for supper.

You want to gather dandelion greens before they flower and become tough and too bitter to eat.  Young dandelion greens are bitter anyway but in my opinion not nearly as bitter as say, arugula.  If you like arugula and other domestic bitter greens you'll like dandelion. 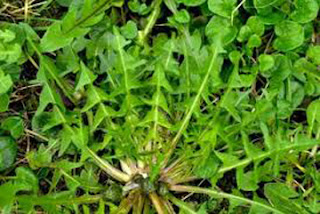 You can just cut off the leaves but since I was weeding I pulled up as much of the root as I could get.  Hose them off well before bringing them in to clean because the mud clinging to the root will settle in the u-trap under the sink and make a mess.  Not that I did that.  Okay, not that I will ever make that mistake again.  Remove the leaves from the rosettes and soak in a sink or large bowl full of cold water.  Agitate them and allow a few minutes for the dirt to fall to the bottom.  Lift the leaves out of the sink and into a colander to drain while you clean out the sink or bowl and refill it.  If you're using a bowl don't pour the leaves into the colander to drain.  You'll just be pouring the dirt back over them.  Repeat until the leaves are clean of dirt.  At this point you can dry the leaves in a salad spinner or just leave them to drain well if you're going to wilt or saute them.

The second component of our foraged dinner was Sunchokes, also known as Jerusalem Artichokes.  These are nothing like the globe artichokes you see in stores but the tuberous roots of this pretty yellow flower that grows wild abundantly in our area: 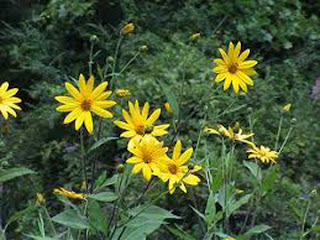 They are best harvested through the late fall and winter months when the tubers are plumped full of stored energy for spring growth.  When you find the flowers it's a good idea to mark the spot so you'll know where to dig for the tubers later.  Never take all the tubers you find.  Leave some really nice ones behind to grow in the coming season.  You can also plant some in your yard for future flowers and ease of harvesting.  Many seed catalogs and nurseries sell sunchoke tubers for planting.

I also scored some garlic from a friend that needed to be used because it was coming to the end of it's storage.  I made garlic confit with that.

First off I made the garlic confit.  This is really simple.  Separate the cloves.  Remove all the loose paper.  You can choose to peel them or not.  I peeled them because the cloves were beginning to show green shoots and I wanted to remove those because they can be bitter (not in a good way).  Place the cloves in a small pot and cover with oil.  I used a good everyday olive oil.  You can use any oil you prefer.  Place over very low heat.  You're not cooking the cloves so much as poaching them.  If the oil starts to sizzle around the cloves, the heat is too high.  Pull the pot off the heat, turn down the burner and put the pot back on when the oil has cooled down a bit.  The garlic is ready when a knife tip easily pierces them.  Pour out into a shallow pan or pie tin to cool quickly, then date, label, and store oil and cloves in a jar in the fridge.  You want to use this up in two weeks max.  WARNING!  Botulism is everywhere and normally the spore is not a problem, it just passes through your system.  However, botulism spores thrive and grow in an anaerobic environment such as garlic cloves in oil, producing a neurotoxin that can have severe effects.  Make only small amounts of garlic confit that can be used up quickly or toss the rest 2 weeks after the date on the label.  Fortunately garlic confit is so tasty it's easy to use quickly.  The oil can be used in salad dressings and cooking or to finish simple veggies (try it on baked potatoes or mashies!) and the cloves are great in so many ways: toss the oil and cloves on plain pasta, sprinkle with parsley and red pepper flakes, or spread them on toasted bread.  If you poached your cloves in the skins simply pinch the root end of the clove to pop them out.

A longer term storage solution for garlic is to peel and slice it thin, and dehydrate it (in your oven on it's lowest setting with the door propped open just a bit if you don't have a dehydrator) until crispy.  The crispy chips make a great garnish or you can grind them into powder.

Next came the sunchokes.  There are many ways to cook the tubers but I wanted a chunky puree.  Scrub them well, peel or not, cut into one inch pieces.  Place in a pot and cover with lightly salted water.  Cook just as you would for mashed potatoes.  When the tubers poke tender, drain the water, mash, and stir in a tablespoon of butter and a couple of tablespoons of milk.  I had a dollop of cream so I used that.  Season to taste with salt and pepper.

My plan was to wilt the dandelion greens and serve them with hot bacon dressing.  Fry 4 slices of thick cut bacon until crispy.  Remove the slices to drain, retaining the fat in the pan.  Turn the heat off under the pan to cool down a bit.  Meanwhile, measure 1/4 cup of cider vinegar, 1/4 cup of brown sugar or maple syrup, and 1/2 cup of water into a small bowl and whisk.  Whisk in one whole egg.  Return your now warm pan of fat to the burner on low heat.  You want the fat to be just warm so the egg doesn't cook.  Whisk in the sugar vinegar mixture and continue whisking over low heat.  The fat and sugar vinegar mixture will emulsify becoming creamy.  Pour the bacon dressing into the small bowl and keep on the back of the stove to stay warm.

Bring the heat up a little on the pan you used for the bacon dressing, add a few tablespoons of water if you've dried your greens, and start piling in the dandelion.  If your greens are still damp forgo adding the water. When the pan is full, put on the lid and allow the greens to wilt for a moment.  Take off the lid, toss the greens in the pan and pile in more greens.  Put the lid back on.  Repeat until you've added all the greens.  Season lightly to taste with a little pepper but hold off on the salt.  The greens will likely have enough salt from the bacon remnants in the pan and the dressing.

I had some tiny bay scallops in the freezer so I thought I'd cook them to top the greens.  I tossed them with the oil from the garlic confit, added a generous number of cloves, salt, pepper and a pinch of smoked paprika, and broiled them quickly.  The garlic cloves caramelized beautifully.

I plated the sunchoke puree in the center, surrounded by the wilted dandelion greens.  I topped the greens with the broiled bay scallops, sprinkled crumbled bacon bits over all and then drizzled the scallops and greens with the warm bacon dressing. 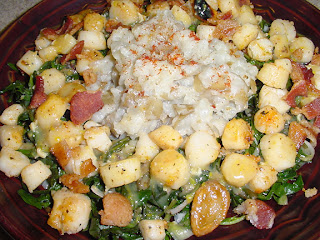 The sweet/tart dressing was a good foil to the bitter dandelion greens and who doesn't like scallops with bacon?  The garlic cloves, well, I think I could eat those sweet, caramelly cloves by themselves but biting down on a scallop wrapped in the greens with a bit of clove and bacon was way better than I anticipated!  The creamy sunchoke puree balanced everything out nicely.

Get out there folks, and gather ye dandelion greens and sunchokes while ye may!
Posted by Rebecca... at 11:33 AM