This month's challenge is Cardamom.  Definitely an underused spice in my arsenal.
It's defined as "A spice (whole pods, seeds, or ground).  Seeds are in pods the size of a cranberry, inside of a white or green pod.  Member of the ginger family.  Spicy-sweet pungent aroma, expensive.  Uses: cakes, curries, cookies, fruits, Indian recipes, Scandinavian bread."  ( http://www.abigslice.com/herbsspices.html ).  It's also common in Middle Eastern and Greek cookery as well.

Recently Michael requested more Middle Eastern and Indian foods be added to our meal rotations.  We'd been enjoying occasional lunches at India Garden in Blacksburg and he asked why this type of food was something I didn't make at home.  I dunno, it wasn't something I had considered exploring.  I had made a few dishes for specials while I was cooking at the Valiant Trencherman but hadn't had the urge to go beyond that.  So Michael offered to buy me a cookbook (recommendations anyone?) and I'm not one to turn down a new cookbook.  In the meantime I searched the web and came up with two recipes for this month's challenge.


The first recipe was a Halva. Halva is a sort of fudge-like confection that may be either flour-based, nut butter-based, or vegetable-based.  Halva made with tahini and pistachio nuts is probably the most familiar and this is the type I had when I first tasted it.  It was a regular dessert offered at the Trencherman.  We bought it in and it arrived as a bread-sized loaf which we cut into cubes to serve.  A cup of dark, strong French Roast coffee and a cube or two of Halva was our usual pick-me-up between the end of lunch service and last minute prep for dinner service.  Nothing like a strong dose of caffeine and sugar before roaring into the controlled chaos of the dinner kitchen!


Since I was out of tahini and did have a bunch of carrots I decided to try a carrot-based Halva.  I've only ever had the tahini type so I thought this would be a nice exploration.  Carrot Halva is popular in Bangladesh (gajorer halua), India (gajar halva), and Pakistan (gaajar ka halwa).  I chose a recipe by Sejal Sukhadwala

Chirongi nuts?  What the hell are chirongi nuts?  Well, I still don't know but I did find out that hazelnuts are an acceptable substitute for them.  Red rose petals are currently out of season and you do not want to use petals from a florist's rose.  Those are sprayed with all kinds of stuff.  Watermelon seeds were out and have you seen the price for edible silver leaf?  I will probably buy some rose water at some point but screwpine?  Another WTH ingredient.  I chose optional.


The instructions for this recipe were simple.  Trim, peel and finely grate the carrots.  Combine them with the milk, cardamom, and sultanas in a large non-stick frying pan. 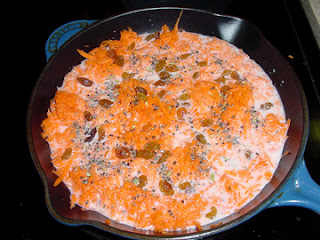 Heat gently and bring to a simmer, stirring occasionally until the carrot is tender and almost all the liquid has evaporated. 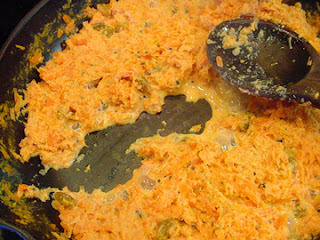 Add the butter, sugar, nuts, and rose water or screwpine essence if using, and stir well.  (It was at this point that I remembered that I have yet to make a successful fudge.  uh-oh.)

Spread the halva out into a shallow pan to cool; garnish. 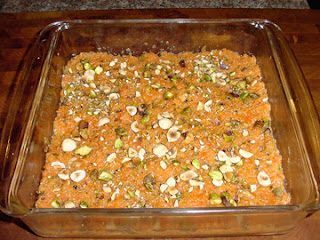 When cool, cut into squares and serve. 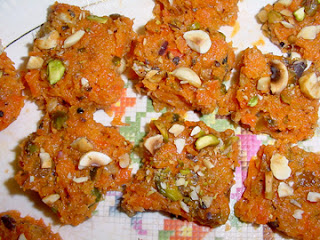 Ok, I think this recipe was a partial failure.  But then again I've never had a vegetable-based halva.  Maybe it's supposed to be this way.  Just like my fudge attempts, it didn't set up.  It wasn't runny but kind of carrot slaw/puddingy in texture.  I had to pat it into the squares.  It did taste really good though and if you want to get carrots into the kids or a vegetable hater, scoop a small serving into a bowl and hand them a spoon.


What I learned is cardamom and carrots definitely go together.  I intend to play with this combination when making carrot sides and carrot preserves.  I think with some tweaking this recipe could be the start of a really great chutney or compote, and cardamom will find its way into carrot jam.


My second recipe is Quick Chicken Korma by Madher Jaffrey .

Put the ginger, garlic and 3 tbsp water in the container of an electric blender. Blend until you have a smooth paste.
Put the oil in a wide frying pan or saute pan and set over high heat.  When very hot, put in the bay leaves, cinnamon, cardamom pods, cloves and cumin seeds. Stir once or twice and put in the onions.  Stir and fry for about three minutes or until the onions turn brownish.
Put in the ginger garlic paste, and the ground coriander and ground cumin and fry for a minute. 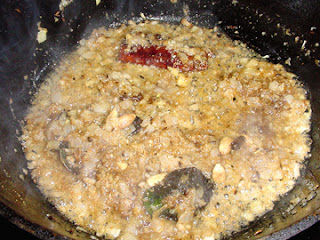 Put in the chopped tomatoes and fry for another minute.
Add in the chicken, chili powder, salt and 1 cup water. 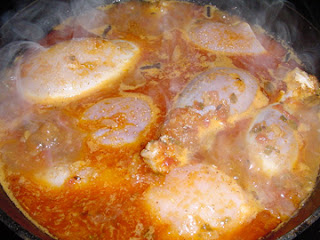 Bring to a boil. Cover, turn the heat to medium and cook for 15 minutes, turning the chicken pieces over now and then.
Remove the cover, remove the chicken, add the cream and cook on high heat for another 7-8 minutes or until the sauce has thickened. Stir gently as you do this. 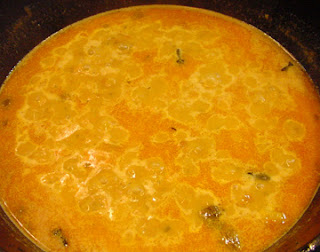 Return the chicken to the sauce to coat and then plate. 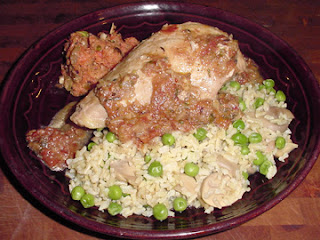 Cooking this was an olfactory delight.  As soon as the first batch of spices hit the oil they opened up and released their fragrance.  When each new spice was added another layer of fragrance was apparent and then blended with the preceding one, hinting at the final flavors.  The process was also visually striking with bright colors coming forward as the ingredients blended.  The next time I make this I will cook the sauce down a little more before adding the cream.  That's the only thing I would have changed.


I think the reason I haven't played around much with Middle Eastern and Indian cuisine is I've looked at the number of different spices in an individual recipe and figured that it would taste much like a palette of different colors looks when swirled together- muddy.  But this didn't.  While no one spice was assertively loud, each one was there adding a depth and richness of flavor.  I really liked this and was very pleased with the effort.  I'm looking forward to leftovers tomorrow.  I think that this, like a good braise, will just get better!
Posted by Rebecca... at 7:37 PM