The leeks and potatoes are coming in now.  We grew leeks for the first time this year and I've been using them straight out of the garden for the last month but last weekend it was time to harvest the whole bed.  I don't know if it's possible to cure and cellar leeks like onions, garlic and shallots, but it became a moot point when I realized this year's potato harvest was also starting to come in.  Marco Pierre White says look around and see what else is mature and edible at the same time as what you're foraging or hunting for flavor pairings and that good advice holds true in the garden.  What's more classic than leek and potato soup?  And leek and potato soup can also be the base for more elaborate soups, stews and chowders with just a few easy additions. 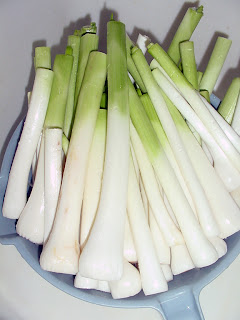 This recipe is for a single approximately 2 qt batch.  It's a 1:1 ratio of leeks to potatoes so it's simple to increase the recipe for the poundage of veg you have.  I used 5 lbs of leeks and 5 pounds of potatoes but I allowed the soup to simmer down and condense a bit before canning.  My yield was 8 quarts of soup.  This recipe is so simple and yet it's so good! 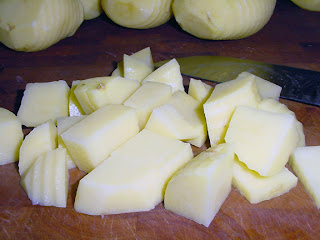 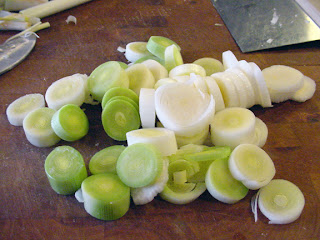 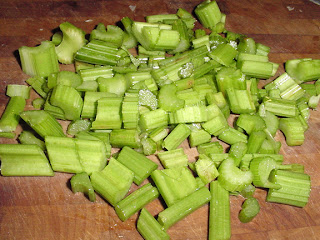 Directions
Combine leeks, potatoes, celery, water and salt in a large pot.  Bring to a simmer and cook until the vegetables are tender.

Mash the vegetables in the pot with either an immersion blender or potato masher or run the soup through a food mill or food processor and return to the pot.  Leave as chunky or blend as smooth as you like.  Simmer for another 15 minutes. 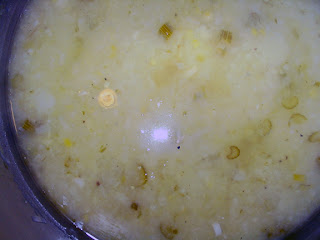 Ladle into clean warm quart jars leaving a generous 1" of head space.  Wipe rims and adjust lids.  This is a low acid food so it must be processed in a pressure canner to be safe.  Process at 10 lbs of pressure (adjusted for your altitude) for 45 minutes.

At the end of the processing time remove the canner from the heat but do not open.  Allow the pressure to zero out on it's own.  When depressurized, carefully remove jars to a surface padded with a towel or several layers of newspaper and allow jars to cool untouched for 24 hours.

Wash the jars and then label and date them.  Add another label saying: Before serving add 4-6 tablespoons of heavy cream OR 2-3 tablespoons softened butter and 2-3 tablespoons minced parsley and/or chives.  The reason for this is you don't want to add dairy to most products that are canned because it just doesn't process well.  The parsley/chive garnish is much more flavorful when added just before serving. 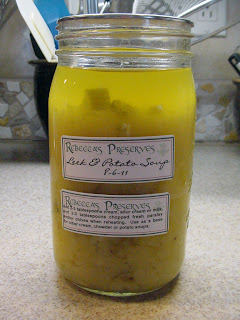 Variations are easy.  Add some clam juice and the shellfish and/or fish of your choice when reheating for a seafood chowder.  Dice and steam carrots, turnips, parsnips and/or other root vegetables and add to the soup.  Add plain corn for corn chowder or go all southwest and add roasted corn and chipotles, chili seasoning or salsa.  Half cooked dry beans, peas, or lentils added along with their cooking liquid and simmered until tender makes a hearty winter comfort soup.  Dice up leftovers and add for a stew.  Top with shredded lettuce, spinach or cabbage just before serving.  Leek and potato soup is handy to have in the cupboard for a quick supper as is or dressed up!