Gardening Floyd: What Were They Thinking?

Obviously they weren't thinking.  Probably they were lazy as well.  Because they knew this would be somebody else's problem eventually and now it is.  My problem.  And I'm pissed.

All around the edges of the lower property we bought last year runs a lively little branch.  That's what a tiny streamlet is called.  We knew when we bought the property that the previous owners (and the previous owners before them) had been dumping their trash around the edges but until I started trying to clean up a couple of weeks ago I had no idea to what extent they had trashed it.

I thought I'd start with the most obvious problem: the tires that were lying along the southwest edge of the property.  I didn't think there were that many and I was going to recycle them into towers for growing potatoes.  So far I've pulled approximately 40 tires out of there in varying states of decay.  Far, far more than I need for potato towers.  What the hell were these people doing? 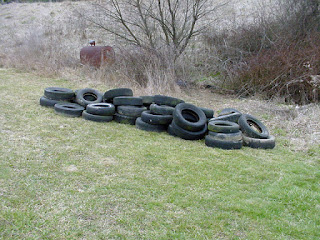 It's been heavy dirty work.  The tires are filled with mud, water, and weeds and I'm always wary of snakes and vermin that might be hibernating in them.  So far I've mostly been able to hook them with a rake and drag them out of the weeds.  But sometimes I have to lift them loose of the ground and it gives me the shudders thinking what I might reach into.  Heavy gloves, long thick sleeves and knee-high wellies are a must.

I've got all the easily reached tires out.  What's left now are under a heavily overgrown rose bramble.  I have a small sling blade but I don't think that will take it down.  I need a machete or something. 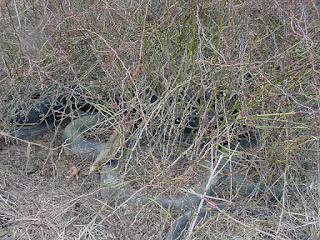 In addition to the tires in this area I've pulled out a coiled length of copper tubing, any number of plastic soda bottles, unidentified other plastic bits, cinder block, rusted metal cans from small to large, what use to be a wooden clothes line with the plastic covered metal line still attached and intergrown with weeds, styrofoam, and PVC pipe.  A lot of this was hidden under overgrowth and was found by stumbling over it.

Oh yeah, and then there's this baby: 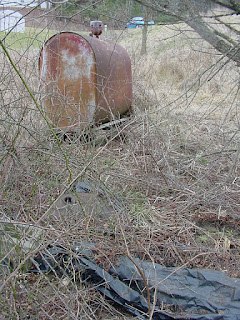 And guess what!  It still has heating oil in it!  How's that for my own little environmental nightmare.  I need to get that safely drained and hauled away as quickly as possible.  Standing where I took that photo, directly behind me is where I've been pulling the tires out.  That's the first 142 feet of property boundary.  Beyond that is another 610 feet of boundary that the branch winds around.  And nearly every bit of it has trash of some sort on it, either in plain view or hidden beneath growth.

To add insult to injury all this trash has been tossed just over the property line.  Meaning that before we bought this property last year they were illegally dumping their waste on our property.

What I'd like right now is to hire a nun with a good stiff ruler to do some knuckle smackin' for me.  I am appalled.
Posted by Rebecca... at 12:14 PM

Email ThisBlogThis!Share to TwitterShare to FacebookShare to Pinterest
Labels: trash