Husbanding Floyd: The Girls are Alright!

It's our laying hens first birthday! 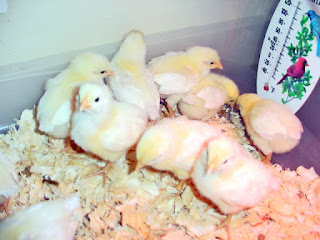 Now they're all grown up, responsible, reliable egg layers. 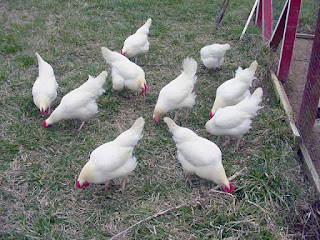 These are Tetra Tint chickens, a hybrid breed that was developed just for Tractor Supply stores.  We were originally out to get a heritage breed for our flock but took the easy road when we discovered these at the local store.  I've been very pleased with them.  They were easy to raise from chicks, we had no mortality, and they have remained healthy with just normal care.  I wouldn't say they are an affectionate bird but they aren't aggressive at all, nor are they shy.  They allow our renter's 3 and 5 yr old daughters to pick them up and carry them without pecking at the little girls or attempting to escape.

The hens probably weigh in at about 4-5 lbs.  We've been told they're a cross between a White Leghorn hen and a California Grey rooster.  They are totally white with just a hint of beige-cream around the neck.  Since they've started laying they've been very regular with their egg production giving us 8-10 eggs on a daily basis.  They didn't slow down through the winter either.  The eggs are large and light brown except for one consistent white egg.  We don't know which hen is laying the white egg but she's been a worker, only missing 3 days since she commenced laying!  Our surplus eggs have been in great demand with the result that the girls are paying for themselves and we are eating free, high quality eggs.

Our girls showed a decided enjoyment of flying and we'd find them outside the run on a regular basis.  Which was all well and good when we were there to supervise them.  But with a den of fox in the hill behind the coop, neighbors dogs running loose, and a red-shouldered hawk that likes to perch in a nearby tree and watch the buffet, we preferred the hens stay in their yard or tractor when we're not there to protect them.  So to that end we clipped their flight feathers.  Oh, they still "fly", but only a couple of feet off the ground.

The only problem we've had with them is bare butts.  This started during the winter.  They're eating well, showing no signs of discomfort or illness.  They are bright and alert.  We've checked them for mites or other parasites and found none. 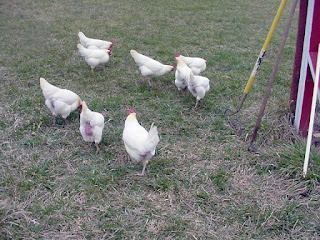 We figure that the bare butts may be a result of winter boredom or they may be molting.  To stave off the boredom we've been taking them on daily romps, installed a seed block, and hung up tether bells in their coop. 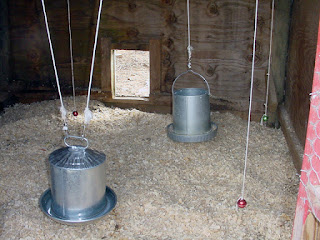 The first of the chickens to have bare butts are now pretty well re-feathered and the others are beginning to grow new feathers.  They've shown no signs of losing feathers anywhere else on their bodies so it may have been a boredom thing.  Another explanation we've heard is they like skin against eggs when they go broody but we've had no signs of broodiness in the girls.  Anyway, they seem healthy and happy and not at all put out about their drafty butts.

We've been so pleased with our laying hens that we are considering adding Cornish Rocks and Bourbon Red turkeys to raise for meat, as well as Khaki Campbell ducks for meat and eggs.  The ducks come as a "straight run" meaning they haven't been sexed.  So as soon as they are old enough that we can tell them apart we will remove the males and raise them separately to mature weight and then send them to the freezer.
Posted by Rebecca... at 11:15 AM