We've been experiencing summer temperatures and spring rains all at the same time here in Floyd.  I've been desperate to get the cool season crops in but the rains have been spaced just far enough apart to ensure that the ground is too wet to till and the weather is warming up fast, almost too fast for cole crops and peas, and some greens.  Michael's weather station has been telling us night time temps have been ranging between 45F-55F.  That's nearly warm enough at night for tomatoes, peppers, and eggplants!

But I have been getting some things in and yesterday the weed wacker and I set to work reclaiming the herb beds.  Days when I'm running full out I rely on last summer's preserves for our evening meal. 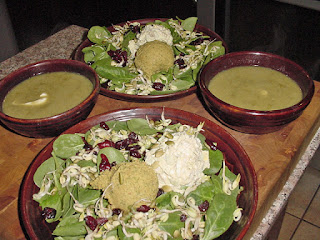 Last night's supper was a jar of asparagus soup preserved from Mike Burton's asparagus.  I can it without any dairy and then stir in a little milk while reheating and garnish with sour cream.  Local spinach from the Harvest Moon, mung sprouts we grow ourselves, hulled pumpkin seeds and cranberries (not local but sustainable!) provided a bed for a scoop each of roasted red pepper hummus and chicken salad.  For a sweet finish we had Peach Halves in Earl Grey Tea Syrup. 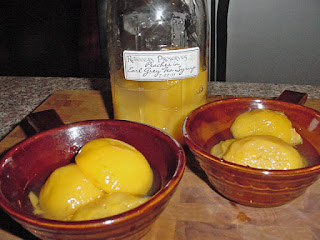 Directions
Pour a tablespoon or two of olive oil in a small pan and warm over medium heat.  When hot, add the unpeeled garlic cloves and toast for about 5 minutes or until they poke tender with a knife tip.  Remove from the pan and set aside to cool.  Reserve the oil in the pan.

Roast a red bell pepper on the grill, over a gas  burner, or under the broiler just until the skin has bubbled and blackened.  Set aside and allow to cool.

Roughly chop a half cup each of parsley and cilantro.  Just remove the leaves from the stems, the food processor will mince it.  Use more or less of each herb according to your tastes, or none at all of the cilantro if you're not a fan.

Squeeze the garlic out of it's skin into the bowl of a food processor.   Remove the skin and seeds from the roasted pepper and discard. Roughly chop the pepper and add it to the FP.  Toss in the cilantro, parsley and lemon zest.  Pour in any olive oil remaining from toasting the garlic.  Pulse the FP to mince and blend ingredients.

Next add the chickpeas, tahini or peanut butter, and the lemon juice.  Pulse the FP a few times and then run until the ingredients become a smooth paste.  Add olive oil to thin the paste to the consistency you desire.  Salt and pepper to taste.

The hummus can be eaten right away but is much better when the flavors are allowed to blend for a few hours or overnight.  Refrigerate but allow to warm to room temperature before serving.
Posted by Rebecca... at 11:02 AM