Preserving Floyd: Peaches Part I: Dried and in Tea Syrup

Mmmmm..., Peaches.  If anything comes close to rivaling strawberries, it's peaches.  I put up peaches in multiple ways and we'll start with the easy ones.  Peaches in a medium Earl Grey Tea infused syrup and dried peaches.

I buy my peaches from Wade's Orchard in Woolwine, Va, just down the mountain from Floyd on Rt 8.  They are my source for plums and nectarines as well. 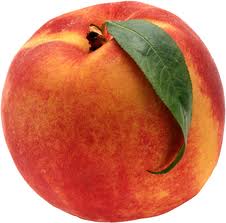 For these and all of the following peach recipes the peaches are initially prepped the same way.
Bring a large pot halfway filled with water to a boil.  Fill the sink or a large bowl with cold water.  Fill another large bowl with cold water and 1/4 cup lemon juice.  Use bottled lemon juice for this.  It's cheaper and it's just acidulating the peaches and stopping them from browning.  Plunge the peaches, a few at a time, into the boiling water for 30 seconds.  Remove and drop into the cold water to cool.  This will allow the skins to slip off the fruit.  Slice the cooled peaches in half, remove pit, slip off skins, and place halves in the bowl with the water and lemon juice. 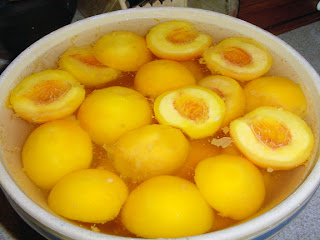 The peaches are now ready for further use.

Dried Peaches
Most sources will tell you to slice the peaches and lay them out on the dehydrator racks.  I did this once and then started drying peach halves.  I remembered dried peaches from my childhood as being halves and kinda jammy in the center and the slices weren't.  The halves take longer to dry but are so much tastier!  Lay the peach halves cut side up with a couple of inches of space between halves.  Set the dehydrator for 135F and 12 hours.  At the 12 hour mark check the peaches.  They won't be ready but may need to be moved around for even drying.  Reset the timer for 6 more hours and check again.  Remove peaches that are dried and reset the timer for another hour or so to finish up the rest.  The peaches are done when they are no longer squishy but still pliable.  They will be a little sticky.  This is all at odds with recommendations but I've never had a problem with them molding or spoiling.  That said, I do keep an eye on them in storage and at the first sign of something amiss I would toss them.  Store them in an air tight jar or bag. 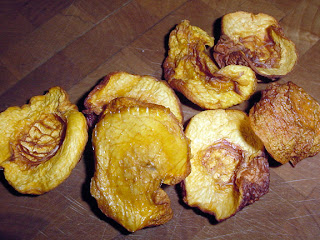 Peach Halves in Earl Grey Tea Syrup
This is a raw pack recipe where you need only make sure you have enough syrup to fill your packed jars rather than being dependent on a certain quantity of fruit. This syrup quantity is for 3 pounds of peaches which will yield around 3 pints of packed fruit.  We loved these so much that the six pints I made went way too fast last year.  This year I put up a half bushel of peaches which yielded 9 quarts.  That should hold us!

Combine the sugar and water in a heavy pot over medium heat and stir until the sugar has dissolved.  Add the teabag and heat to a boil.  Multiply the recipe to make enough syrup for the amount of peaches you have.  Be generous with the syrup.  It's cheap enough to make and you can can or refrigerate what's left over for other uses.

Once the syrup comes to a boil slip several peach halves into the syrup and turn a time or two to coat.  Ladle a spoonful of syrup into the jar. Lift the peaches with a slotted spoon from the syrup pot and place them directly into the jar.  Pack them in firmly but don't smash them.  Add a little more syrup and lightly press down on the peaches to squeeze out air bubbles.  Add more peaches to the shoulder of the jar then top with syrup leaving a very generous 1/2" of head space.  Again, lightly press peaches to remove air bubbles.  Wipe the rim, adjust the lids and process in a boiling water bath for 20 minutes for pints and 25 minutes for quarts.  Adjust processing time for altitude. 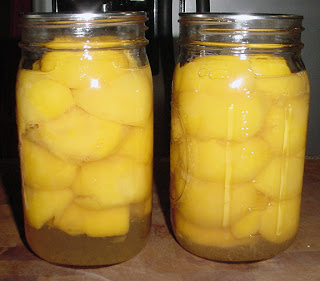 Here are the finished peaches exhibiting two flaws common to canning.  Most obvious is the floating fruit.  This is a purely cosmetic flaw.  It's the result of not only air bubbles trapped between the pieces of fruit but air in the cells of the fruit.  In the jar on the left you can see I didn't do as good a job of releasing the air bubbles as I could have.  In the jar on the right I did a pretty good job and that little bit of float can be attributed to air in the fruit cells.  One way to combat fruit float is following the initial prep of your fruit, sprinkle it with some of the sugar called for in the recipe and allow it to sit overnight.  This is called macerating.  The sugar draws the water out of the fruit's cells and the cells collapse holding less air and becoming less buoyant. The next day drain the fruit of the accumulated juice and use that juice to replace some of the water called for in the recipe.

The other flaw is called siphoning.  Siphoning happens when the vacuum forms in the jar and liquid is expelled between the lid and the rim of the jar.  It's usually a result of overfilling the jars.  I'm sure I filled the jars correctly but they siphoned anyway.  Siphoning can compromise the seal of the jar.  Test the seals of the jars thoroughly after cooling.  If you look at the photo you'll see that the liquid is well below the top level of the peaches.  It should just cover the peaches.  As a result those exposed peaches will discolor.  This too is a cosmetic flaw as long as the jars are well sealed.  I checked every jar extra well for an intact seal when washing them before storage.
Posted by Rebecca... at 11:36 AM