Back when I posted about currants I showed the 5 lbs of black currants we picked but never got further than that. There's been a lot of (mostly peach) preserving going on but not a lot of posting.  This is the first of the catch-up (as opposed to ketchup - that's later) posts. 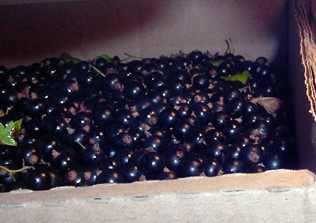 Black currants are dark, tart, and musky in flavor, and are very seedy.  For many people, and I'm one of them, they're an acquired taste.  Michael wanted to see what they were all about since black currants are relatively easy to grow and disease and pest resistant.

Black currants are most often preserved as jam, syrup, or cordial.  We decided to try ours out as a jam and followed this recipe:

Black Currant Jam
Ingredients
2 pounds of  black currants
3 pounds of granulated sugar
1 tablespoon of good, sweet brandy
Directions
Put the black currants in a bowl and crush them using your favorite tool; then, add all the granulated sugar, seal the bowl (e.g. with plastic wrap) and let it rest overnight.
Pour the contents of the bowl into a large saucepan, and slowly bring to the boil; boil for 3 minutes only, then add 1 tablespoon of brandy and let it rest for another half an hour. After this, seal and process for 10 minutes.
Michael and I were in agreement.  We so did not like this.  The tart-sweet balance was fine and there was a flavor in there we liked but the muskiness we weren't sure about and the seediness was hugely annoying.  I hate it when it looks like I've wasted time and food.  There were 5 pints of useless jam staring back at me.
So I took a few days to think about how to rework the jam into something we'd use and like better.  I consulted with preserving friends.  I figured the best way to save it was to go the syrup or cordial route.  I opened all the jars and ran the jam through first the food mill and then a fine sieve to get rid of the skins and seeds.  Then I tasted it to see if it had changed any since being jarred.  It had!  But I don't know what it was the result of since I didn't taste it before I milled it.  The muskiness was mostly gone!  There was just a hint of it left to add an interesting note.  And without the seeds the jam was smooth and no longer annoying!  I waited until Michael came home and tasted it before proceeding any further.  He agreed that the jam was much, much better.  So I reheated the now smooth and seedless jam back to boiling and went through the whole processing procedure again.
While we probably won't be using this jam as a spread on toast or bread there is no doubt in my mind that this will make a great glaze for poultry, pork, game and maybe even salmon.  It will definitely find its way into chocolate applications like a layer inside brownies or a filling for a dark chocolate cake.  I think it would make a good companion to Cheddar, Parmesan, and other hard, tangy cheeses.  It definitely won't go to waste! 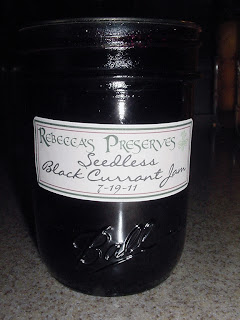