One evening last week during the brief respite we had from the current heatwave, we had the windows open and were enjoying a breeze when we heard a god-awful cacophony coming from the chicken coop!  Immediately our protective instincts kicked in and we rushed down to chase away whatever predator was after our chickens to find...  nothing. 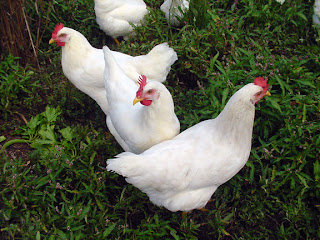 Assuming they were having a sibling spat and establishing pecking order, we returned to our own coop.

A few days later Michael was in the coop attending to the bedding and all was as it had been.  No evidence of any unwelcome intruders.


We've seen signs over the past couple of weeks that the girls were possibly thinking they had a greater role to play in life beyond disposing of kitchen scraps, amusing their servants, and playing Prison Break (in spite of having their flight feathers clipped).  We noticed there were concave circles in the shavings in the nesting box and various corners on the floor of the coop.  They were getting noticeably broad in the beam ("Can you ever fit your fat ass through the door?").  They were making these little self-satisfied chuckling sounds.  But they weren't due to start laying until September.  We figured they were just practicing. 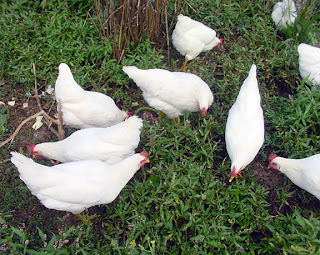 Yesterday morning on our way into town we noticed that one of the hens had breached the fence again.  Michael hopped out of the truck to round her up while I waited.  And waited.  Finally he returned saying he could only count 9 chickens in the pen.  He had called for the other hen and usually they come running to us but she didn't.  He peered in the coop and saw nothing.  Finally, in a little panic he went into the coop and there in the nesting box, spread as wide as she could go, was the missing hen setting on a huge clutch of eggs! 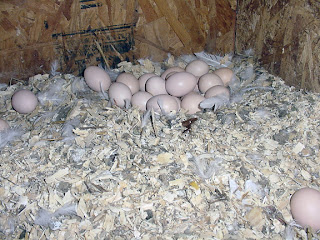 There were two clutches this size in the back corners of the box and two smaller clutches in the front corners for a total of 3 dozen eggs!  As close as we can figure it had been only four days since Michael had been in the, at that time, eggless coop.  Obviously several of the hens had started laying!  Well ahead of schedule! 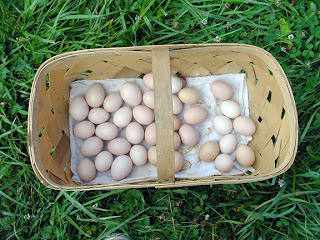 The eggs are small and I expected that.  The first eggs laid are generally small but as the hen matures her eggs become larger.  They were all well formed with solid shells, perfect little firsts.  I immediately added a little oyster shell to their diet since they will be needing a calcium boost from here on out to aid with shell production.

I've been hoarding egg cartons for a couple of years now.  Even before we had the chicks.  Now I get to start filling them!  When you store your eggs don't wash them.  There is a sort of cuticle on the exterior that keeps bacteria and other baddies from penetrating the shell and helps them stay fresher.  Place them in the egg cartons pointed end down, broad end up.  This keeps the yolk centered in the egg and surrounded by the white.  The eggs will keep for a few months under refrigeration although the white will evaporate a little, leaving an air bubble to form in the broad end but the white still protects the yolk.  Date your filled egg cartons. 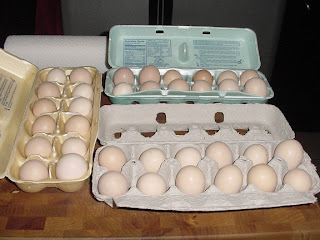 If you have a carton that's only partially filled you can date the eggs themselves with a felt tip pen: 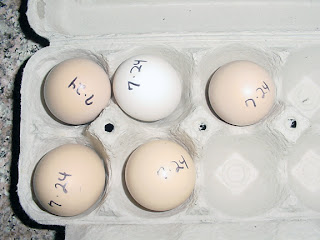 Before using your eggs scrub them gently with a soft brush, warm water, and soap.  Rinse and dry them before cracking them open.  If you can't stand the thought of storing them as is from the chicken, wipe them gently with a dry cloth before storing.  But honestly, the eggs arrive pretty darn clean.

We're very proud of our hens and excited to have our own eggs.  But we do have a little mystery we could use some help with.  Back in March when I introduced the chicks to you I said that even though we had bought pullet chicks it was always possible for males to slip into the mix since identifying the gender of fluff balls is difficult at that age.  I'm of the opinion that two of our hens are really cockerals.  Michael thinks they're hens because they are smaller than the other hens.  My argument is they have larger, redder combs and wattles than the other chickens and if they are male and don't need to lay eggs of course they won't be so big and broad.  If any of you out there have an opinion we sure would like to hear it in the comments.  If those two chickens are really male then I want to remove them from the flock as soon as possible. 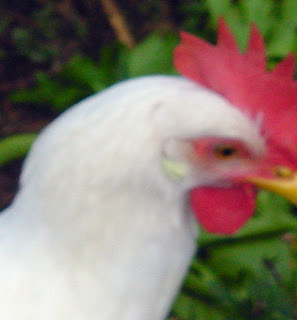 See the difference in the combs?  I haven't heard either of the suspects crow yet but they may still be too young to have found their voices.  Any input will be appreciated!
Posted by Rebecca... at 10:07 AM