This month's challenge is timely since I just harvested the first overload of basil from the garden.  This year we planted Genovese, Lemon, and Lime basil.  So in addition to the recipe for the challenge I put up more than enough pesto to get us and a couple of other households through the winter.  And that was just from the first harvest!  The tomatoes haven't started coming in yet but they will shortly and it's nice to know I'll have enough basil to be indulgent with it!

Preheat the oven to 450F.  Spread the sliced shallots out on a rimmed baking sheet and drizzle with the oil.  Bake for approximately 10 minutes, stirring once until deeply browned.  Keep an eye on them for the last few minutes since they can go from browned to blacked very quickly.  When ready transfer to a medium bowl. 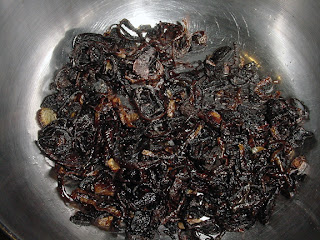 If you don't grow shallots, you should.  Best when planted in late fall, they can also be planted in early spring, or if space is a problem, slap them in big pots.  They are way too easy to grow and the return is huge!  When you have harvested and cured them, save the best looking ones for planting next year.  You'll never have to buy shallots again!

In a good-sized skillet, stir the coconut until lightly browned and add to the bowl. 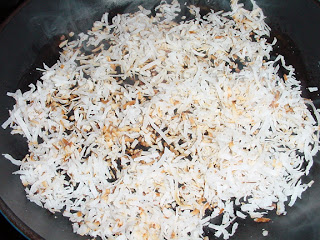 Wipe out the skillet and add the sesame seeds.  Toast the seeds for about a minute or less.  Watch out for tiny flying hot seeds because as they toast some will pop and take to the air! 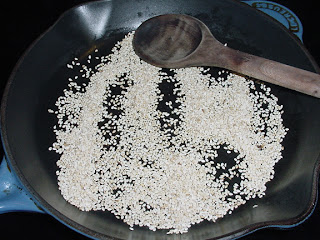 Add the seeds to the bowl with the coconut and shallots and toss. 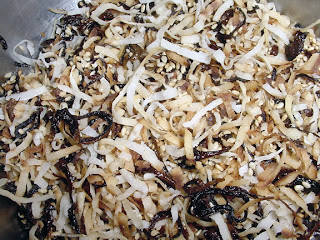 Mince the candied ginger, thinly slice the red pepper (I used 2 hot red cherry peppers from our garden, the first of the year!), and julienne the basil.  For least pepper heat remove all the seeds and membranes.  For more pepper heat leave a little of the seeds in.  For all the pepper heat, use all the seeds and membranes.  To julienne basil, remove the leaves from the stems and stack them.  Roll the leaves into a cigar shape and thinly slice across the cigar. 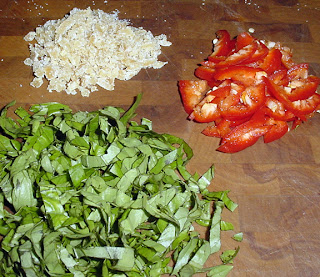 Add the ginger, red pepper, and basil to the coconut mix. 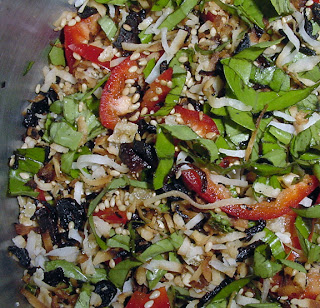 Next, rinse and drain the scallops.  These gorgeous scallops were supplied by Indigo Farms Seafood.  I can't say enough good things about these people and the quality of their products.  If you live here, buy from them. 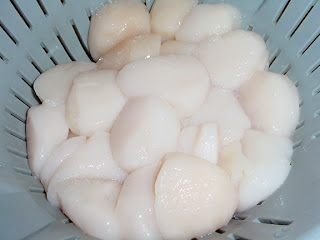 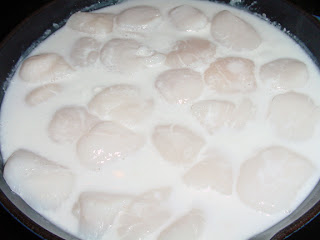 Add the fresh lemon juice, salt and pepper to taste and gently fold to combine.  The coconut milk will thicken slightly.

I plated the scallops with steamed rice.  Place a spoonful of rice on the plate and surround with a generous puddle of the coconut milk.  You might want to use pasta plates or other wide, shallow bowls (I use small glazed stoneware pie pans that match my vintage stoneware).  Place scallops along side the rice and garnish generously with the shallot, basil, sesame sprinkle. 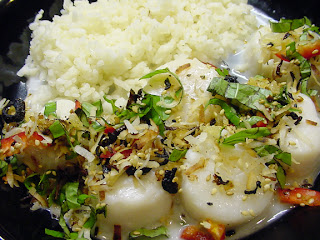 Sliced cucumbers, fresh from the garden, dressed with maple vinegar, oil, salt and pepper served as a cooling foil to the spiciness of the sprinkle.  Michael and I like warm spicy but not rip-the-cells-off-your-tongue hot and this almost crossed the line.  I used a few of the pepper seeds in the sprinkle.  Next time I won't use any.  Now I have a hint of just how hot the cherry peppers are going to be!

I've never cooked with coconut milk before and I really loved the buttery sweet flavor it added to the scallops.  I liked this interpretation of coconut shrimp because I haven't had coconut shrimp since this shrimp sensitivity developed and while I like the crunchy fried shrimp this somewhat healthier version still has a satisfying crunch without the deep fry.  And why I didn't make fried coconut scallops before this, I just don't know.  But I will.  Because an occasional fried crunchy indulgence is ok.  And orange marmalade horseradish sauce rocks.  I can justify anything.

I'm a fan of crunchy sprinkles so I made a good bit more than the recipe called for.  This way besides the pretty plate, there were more sprinkles to be had if wanted (which we did).  There was also quite a bit of the mixture left over after that (oops!).  Not wanting to throw it out, I spread it on a non-stick sheet on a dehydrator rack, covered it with the mesh screen from another rack (so it wouldn't blow away) and dried it until the basil and pepper were dehydrated.  The resulting crunchy sprinkle is very tasty and I'm going to use it on salads, soups, and sandwiches.
Posted by Rebecca... at 11:45 AM