Gardening Floyd: Down on the Farm, April '12

I didn't disappear since the last Dark Days Challenge post.  I've been putting in 6-8 hour days in the gardens then coming back to the house, eating supper, maybe making it through a movie but more often falling asleep during said movie, or just going straight to bed.  I've discovered to my dismay that, at 55, the sore muscles of spring don't recover as fast as they use to, if at all, and the best way to deal with them is aspirin before work, and a long hot shower and aspirin after work, supper, and a book in bed.

Michael had last week off and he took over cooking supper.  He's been entranced with Asian and Indian flavors so it was a real treat to come in from the garden to an already prepared dinner quite different from my style.  Michael's Dan-Dan Noodles rock! 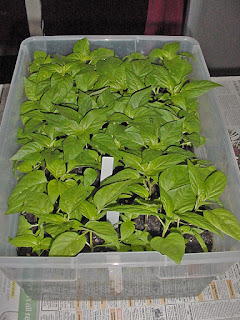 Here's some of what we've been doing.  There's so much more I didn't get pictures of!

I started transplanting the tomato seedlings into bigger pots on the first of April.  We're trying to perpetuate a friend's family heirloom tomato called a Smokey.  To that end I currently have 125 of these little buggers in tubs.  The plan is to give half or more of them away to folks who will save the seed, grow them for themselves and pass some of the seed on to other folks.  It's an extremely tasty tomato and we don't want to see it lost.  However, here it is only two weeks later and they're ready to be transplanted again!  I need to go raid the milk jug recycling boxes around Floyd because I'm nearly out of pots! 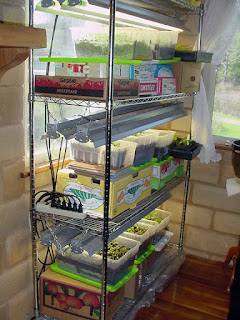 That's the seed shelf looking all neat and under control prior to the repotting frenzy.  Now it's crammed with tubs and flats of all sizes.  In addition to the 125 Smokeys, there are 41 Mr. Stripeys, 28 Amish Pastes, 10 Currants, and 60 Principe di Borghese.

The peppers have been relegated to the kitchen table and chairs... 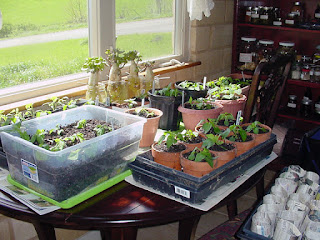 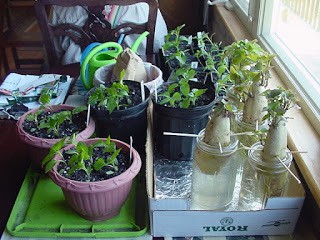 ...along with the sweet potatoes.  That table's holding 20 Anchos, 10 Carnival Bells, 10 Mini Bells, 13 Corno di Toros, 14 Joe's Hot Rounds, 14 Alma Paprikas, and 10 Golden Treasure sweet peppers which showed up as a free trial packet of seeds with an order.  I have no idea what they are but what the heck.

There's still 2 varieties of eggplant awaiting their first transplant into bigger pots and they're screaming to have it done NOW because their shoes are too small and their toes are being pinched!

With this overload we broke down and bought the parts to put together a second seed shelf because I have yet to start the cukes, squash and melons.  Which must happen this week.

The cold weather crops are all out in the garden.  They'd be doing well but for the days of high winds we've been having that dry out their tender leaves.  And we could use a good bit more rain.  So I've been watering a lot and Saturday I laid soaker hose and started spreading mulch in an attempt to conserve moisture and protect the plants.  The peas and Chinese cabbage, the lettuces, chard and spinach have been withstanding it pretty well, but I'm afraid I'm going to have to make a trip to Dulaney's greenhouse and replace the regular cabbage, the cauliflower and half the broccoli. That wind just dessicated the plants.
You can see from the photos just how dry everything is.  Bad enough when it happens in July and August.  Spring is supposed to be verdant.

The tires for the potato towers are in place, the bottom tires filled with topsoil and ready to receive Rose Finn, Banana, and Blue fingerlings and Yukon Gold potatoes.  A couple weeks ago I ran across a 4 lb bag of mixed fingerling potatoes for $4 in the produce section of Walmart.  Since that was way cheaper than buying a pound of fingerling seed potatoes I decided to give it a try.  Those little spuds have all sprouted nicely and are ready for planting!

Michael was busy raking up wheelbarrows full of pine needles up the hill behind the house and wheeling them down to mulch the blueberries.  He cut and drove in conduit around the blueberries, chi and currant bushes, and the Shipova tree to support netting and protect them from the critters.  He did the first mowing of the year (a job he hates so I really appreciate the sacrifice he makes to do it.  I'm frightened of the combination of the lawn tractor and our hills.) and reclaimed a bit of the yard from rose brambles and sumac.  Our first year asparagus bed finally made a showing and Michael weeded that, then loosened the soil a bit and replaced some crowns where there were gaps.  Michael also set up a utility sink beside the outdoor faucet so we now have a place to rinse veg (and us) before bringing stuff into the house.  He ran a piece of tubing from the drain into the downspout runoff pipe so water doesn't collect on the ground around the sink and become a mudhole.  Brilliant!  Michael also got time in riding his bike, pedaling over 300 miles last week as he prepares for a 350 mile bike ride from Washington D.C. to Pittsburgh, Pa in June.

Everybody asked us what we did for Easter to which we replied, "We cleaned the chicken coop!"  Most people don't understand why we should get excited about such a job.  We see what comes out of the coop after a long winter as black gold in the making for our garden in the fall.  We use the deep litter method along with liberal amounts of food grade diatomaceous earth mixed in so when we clean the coop it's neither smelly nor wet.  I'm not saying it's a fun job.  You can bet Martha Stewart relegates that task to staff.  But it's not nasty.  We mixed the contents of the coop with leaves our neighbor dumps for us and the hens have taken responsibility for making sure everything gets turned and picked over on a daily basis. 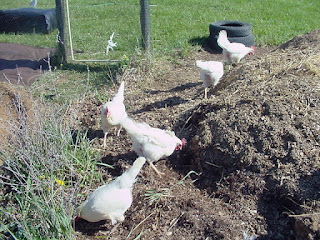 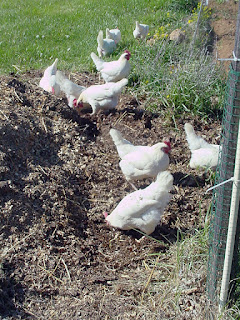 But of course, no matter how much fun it is scratching in the compost pile, everybody goes running when they hear the sound of the fresh veggie scraps bag being shaken! 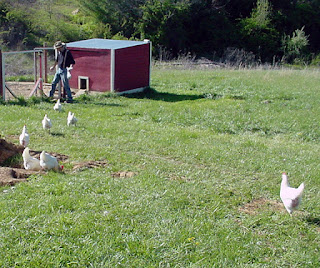 And lastly, Julius plowed up our new 30x50 garden down on the lower 40.  It needs to sit for a couple of weeks and then he'll be back to disk it.  After that Michael will rototill it and then we'll plant it full of dry beans.  We're planning on cannellini, chickpeas, jacob's cattle, tepary, and marrow beans going in there.