I'm never sure whether I should put refrigerator pickles under "Preserving" or "Cooking" because they're a bit of both.  They are intended for nearly immediate consumption but the vinegar brine makes them last far longer in the fridge then a cooked veg normally would and longer than most veg in a raw state.  Since refrigerator pickles will be consumed while summer's still upon us and not saved for the depths of winter, I'm opting for "Cooking". 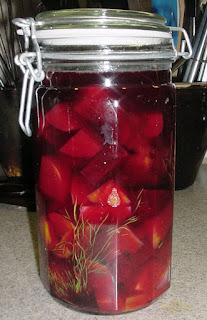 There were a bunch of mixed beets in the CSA box and I had another bunch on hand and since Michael is not a beet or a pickle fan I decided to be greedy and pickle them all.  For I am an ardent fan of pickled beets.  And if you toss some of our hard boiled eggs in there as well, I'm happy!

Preheat the oven to 400F.  While the oven's heating trim the greens off leaving about an inch of stem on the beets.  Save the greens for something else.  Trim the roots to about a half inch, then scrub the beets well.  Place the beets on foil on a baking sheet and then crimp the foil shut around the beets making a pouch.  Roast the beets until they poke tender in the center.  This could take from 20-45 minutes depending on the size of the beets.

When the beets are tender, remove from the oven, open the pouch and allow to cool until you can comfortably handle them and then slip the skins off.  Cut the beets into whatever shape you prefer.  I like 1" chunks.  If you have tiny baby beets, leave them whole.

While the beets are cooling, make the brine:

The fun part is spicing the beets.  This is what makes your pickles uniquely yours.  I used a frond of fennel, a star anise, a few black peppercorns, and a strip of lime zest in this batch.  Sometimes I use cinnamon and cloves.  Ginger, allspice, and cardamom go well with beets.  Experiment and keep notes.  They'll all be good but sooner or later one combination will stand out as your signature blend.

Place the beets in a warmed jar.  Definitely warm the jar because you're going to pour hot brine into it.  Hot brine hitting a cold jar will most likely lead to lots of cussing when the jar shatters.  Tuck the spices in amongst the beets.  Now carefully and slowly pour the brine into the jar, enough to completely cover the beets.  Allow to cool a little, then cap and place in the refrigerator.

Allow the beets at least a week to become fully pickled and flavored.  They will be good for 6-8 weeks but around here they never last that long!