The spring canning classes were finally over last Tuesday and Shana, Cathy, and I heaved a huge sigh of relief.  Don't get me wrong, we immensely enjoyed teaching them, but the responsibility was driven home to us of how important it is to purvey information clearly and succinctly so the students know how to preserve safely. We had a great turnout of really nice people truly interested in taking control not only of what's in their pantries but what's in the stuff that's in their pantries.  We'll be offering one more canning class around the beginning of September before hunting season starts, focusing on canning meat and stock.  In the meantime we're doing a post-mortem on the classes we've done so we can offer better classes in the future.  We eventually want to offer classes on freezing, dehydrating, root cellaring, and stocking the pantry: how to determine what kind of produce, how much to plant or buy in, and how much to preserve to get through the year.

In between classes I've been getting stuff in the ground and went from being ahead of the gardening game to starting to lag behind.  I still have some tomatoes, winter squash, cucumbers, melons, and basil and dill to get in not to mention the ground cherries and tomatillos that I want to get established in their own plots so they can self-seed. The dry beans need to be planted in the new bed.

The Super Sugar Snap Peas are coming in strong and for the first time ever we've planted enough that I'm going to have some for freezing!  Normally they don't even make it into the house being eaten straight off the vines.  But this year we planted 20 feet of snap peas in the house bed and a week or so later another 20 feet in the Lower 40.  The Lower 40 peas should be ready to start picking today.  The Wando English shelling peas are probably ready for their first picking too.  We have about the same footage of them planted between the house and the Lower 40 on the same schedule too.
The lettuce and broccoli are done but the Wawa Tsai Chinese cabbage is still coming in strong.  The Stonehead cabbage is still working on heading up.  The "Amazing" cauliflower isn't.  It seems to be taking forever.  I'm not seeing signs of a head anywhere.  The radicchio was a failure.  It never headed and went straight to spit-out bitter.  The spinach has been good and so has the chard.
I got whole strawberry preserves and asparagus soup canned.  There's strawberries in the freezer.  We picked nearly 25 lbs (almost $60) of cherries at Levering's Orchard last Saturday and when I started pitting them on Sunday morning they turned out to be infested with these little white worms: 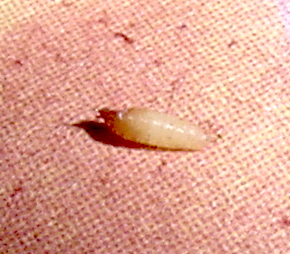 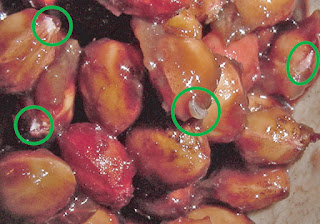 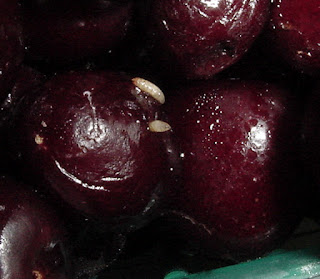 So, I immediately phoned the orchard.  The woman I talked to tried to imply that the worms were somehow my fault until she heard that the cherries had been handled correctly and refrigerated immediately when I got home.  She said I had to talk to the owner, took my name and number and hung up.  Of course, the call hasn't been returned.  Our extension agent knew right away what the worms were: fly maggots.  The eggs of which were already laid in the cherries when we picked them.  We picked all our cherries from the same tree while friends of ours picked their cherries from a tree further up the hill from us.  Their cherries were pristine.  We just happened to choose the wrong tree.  Michael was a bit nauseous when he saw the worms.  He kinda snacked a lot while picking.  I really hate having to be "pro-active" and make places like this do what's right.  Worms can happen to anybody, but it's about customer service and making things right that's the issue here.  I'd be perfectly happy if they would just swap out an equal amount of cherries for the ones we picked.  I depend on cherries from their orchard for our year's supply and I simply can't afford to write off that amount of time and money with nothing to show for it.  Or go back out and pick again, essentially paying twice as much for the same amount of cherries.  **sigh**

~~~~~~~~~~~~~~~~~~~~~~~~~~~~~~~~~~~~~~~~~~~~~~~~~~~
!!! WORMS IN CHERRIES UPDATE !!!
Yesterday I placed another call to Levering's Orchard and instead of a human got a recording saying that Monday's rain had wiped out the rest of the cherry crop.  From there I sent an email to two addresses I found on their website. Frank Levering emailed me this morning offering to refund my money or replace the cherries with the current fruit they're picking. I'm happy with that.  I'm bummed that we won't have a supply of cherry products this year but we will have another fruit in it's place.


***EATING CROW (not cherries)***
I've also realized that this is a prime example of one of the major risks of farming, growing, and eating locally.  I mean, I've always known that intellectually but as Michael and I become more dependent on ourselves and local growers, this is being driven home in a real way.  You will sometimes lose a crop that you and your family really love or even worse, that a grower really depends on.  In the case of the cherries, for Michael and I it's an inconvenience and an annoyance.  For Frank, it's a big loss of income and weeks of loving labor to have lost the last few weeks of cherry picking to worms and heavy rains.

Thank you Frank, for offering acres and acres of beautiful fruits every year.

If you're looking to preserve cherries now, check out the recipe archive above for some recipes we love!

We've had some really nice Springtime suppers that I hope to get posted soon.  Asparagus, baby beets, new potatoes, fava bean hummus...  Hopefully I'll have those meals posted in the next day or so.

Okay, I'm off to do some harvesting.