Michael's off doing a 350 mile ride between D.C. and Pittsburgh cycling on the rails-to-trails of the old C&O Canal and Great Allegheny Passage train routes.  So I'm on my own this week.  That means most meals are me grabbing whatever's ripe in the garden (like eating a quart bag of sugar snap peas while watching a movie), or things that Michael won't eat (fresh oysters rolled in cornmeal and crisp fried), or working on the contents of the CSA box (Panzanella salad from hydroponic tomatoes, English cucumber, purple scallions, a cubed leftover bagel, and last year's pesto mixed with oil and chive vinegar for dressing).  And did I take pictures of any of that?  Of course not.  But I did take a picture of this: 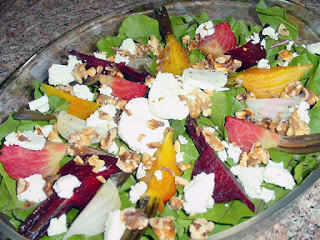 That's a roasted beet salad made with mixed beets and beet greens, walnuts and chevre.


I followed Gordon Ramsay's directions for roasting beets on a bed of salt.  I'm not sure if it was any different than just roasting the beets but it was worth a shot and it looked kinda pretty. 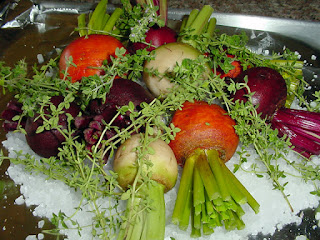 I lined a sheet pan with foil and put a pile of large grained salt on it.  The cleaned beets were wriggled into the salt and then topped with sprigs of thyme that were in the CSA box as well.

Then I folded the foil over everything to make a packet and put it into a 400F oven until the biggest beet poked tender. 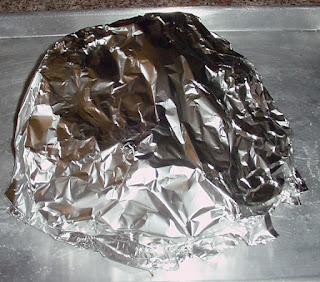 After the beets cooled enough to handle, they were peeled and quartered.
While the beets were roasting the beet greens were in a sinkful of cold water, crisping up... 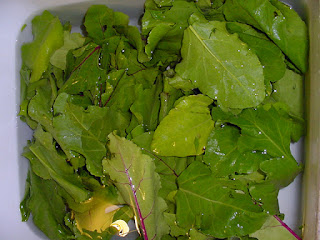 ...and then spun dry and torn up into the salad bowl.  That's one of the things I love about beets.  They're an all in one salad package! 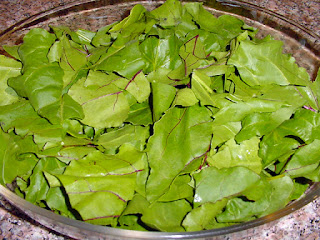 All that was left to do was to arrange the beets on the greens, sprinkle them with chopped toasted walnuts and crumbled chevre, and a garnish of thinly sliced scallions.

The salad was drizzled with the following vinaigrette:

Place all ingredients in a jar except s & p and shake well.  Add a bit of salt and pepper, shake again, and taste.  Repeat as necessary.  I like to mix this up with a stick blender for a thicker, more emulsified dressing.