1-18-13  Ok, not the most auspicious start to the New Year.  That flu turned into bronchitis.  Still doing antibiotics, still coughing, but definitely doing better.  And the computer went down.  After Michael did a diagnostic and then another 2 hour diagnostic with some tech guy in India, HP had us send the tower to them somewhere in Indiana.  Thank God it was still under warranty because the mother board was fried.  So we're back online and-  oops.... 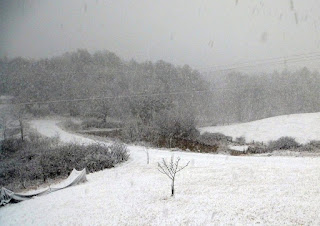 The tower arrived home Thursday morning.  I called Michael to tell him it was here and he came home a little after noon to hook it back up.  Did I mention it had been raining for the past week?  Unseasonably warm with continuous rain and the ground is sodden.  Trees falling over because their roots can't grip the ground kind of sodden.  After the tower was hooked up we went out and laid down pallets on the mucky dirt floor of the chicken coop and piled a bale of shavings on top of that for the hens because so much water had seeped into the coop that their bedding was wet.  If temperatures plummeted I didn't want their poor little pitties freezing. 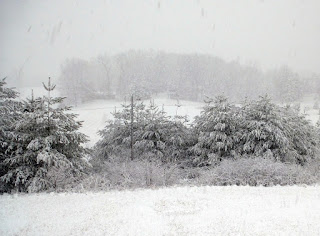 Just as we finished in the coop around 2:30 the rain turned into ice pellets and came down with a vengeance.  When it finished turning everything into a slushy slippery mess it flipped over to heavy wet snow.  Now the trees are falling down because they're covered in ice and heavy snow and their roots have nothing to grip.  Lovely. 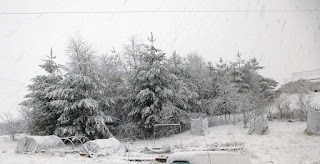 Knowing the girls now had a dry protected place to hang out I turned to making a hot pot of soup to warm us from the inside out.

Caldo Verde, Portuguese Potato Kale with Sausage Soup
Caldo Verde is one of those soups that you don't have to fuss over.  It comes together quickly and with some crusty bread and a crunchy salad makes for a deeply satisfying meal.  A spicy garlicky sausage is traditional but you can do without if you're so inclined.  Just rev up the spice with the addition of some extra pepper flakes and maybe a drop of liquid smoke.
Ingredients
2 Tbsp olive oil
1/2 lb or so of a garlicky spicy sausage (a hot Italian or chorizo would work.  I used a cajun spiced chicken sausage.  Spicy tofu or seitan sausages would also fill the bill.)
1 small onion, chopped fine
3 cloves garlic, chopped fine (or more depending on your love of garlic.  I used more.  Like 6 cloves.)
(optional: 1 sweet red, orange or yellow pepper for color, cut into 1/2 inch dice)
4-5 large potatoes, peeled and cut into 1/2inch cubes
water
1 small dried hot red pepper, flaked and seeds removed
1 large bunch of kale (or more) torn from the ribs into bite sized pieces (save the ribs for salads or  sides or your chickens)
salt and pepper to taste

Directions
Heat the oil in the bottom of a heavy pot that is big enough to hold the finished soup.  Pierce the sausages if necessary to render out some of the fat.  Brown the sausages on all sides.  Remove from the pot and reserve.

If a lot of grease has accumulated, pour off all but 2 tablespoons.  Lower the heat and saute the onions and garlic until soft.  Do not allow them to brown.  If you're using the optional sweet pepper add it now.

Add the potatoes and enough water to cover them by an inch.  Bring to a boil, then turn down to a simmer.  Cook until the potatoes are tender.

With a slotted spoon, remove some of the potatoes to a bowl.  Puree the remaining potatoes and ingredients in the pot with a stick blender or a potato masher.  Return the reserved cooked potato cubes to the soup.

Stir in the red pepper flakes.  (Instead of the optional fresh sweet pepper I used dried sweet red Corno di Toro pepper rings that I had made at the height of last summer's pepper season.  I crushed a handful of these and added them with the hot pepper flakes.)

Slice the sausages thinly and add to the soup.  Simmer for 5 minutes and then season with salt and pepper to taste.

Add the torn kale and simmer another 5 minutes.  Taste again for seasoning and serve. 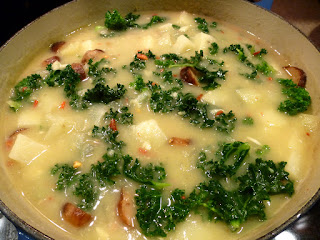