Nyuk-nyuk-nyuk! That's how I remember the pronunciation.  The 3 Stooges' Curly's way of laughing.  nya-OH-key.  Gnocchi!  Gnocchi are an Italian dumpling traditionally made with cooked starchy potatoes, flour and sometimes an egg, then boiled and sauced.  The beauty of gnocchi is that they are a blank canvas.   You can add all kinds of things to the basic recipe from spinach to cheese, herbs, spices and more.  I have two half bushel boxes of sweet potatoes squirreled away so I chose to make mine from our Beauregard variety. 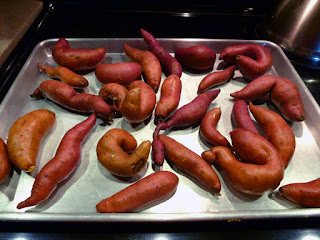 By the way, if you're planning on growing sweet potatoes next season, the time to start your slips is NOW!  Slips are expensive and sometimes hard to find.  I started mine last year from grocery store sweets with great success.  Click here for directions. 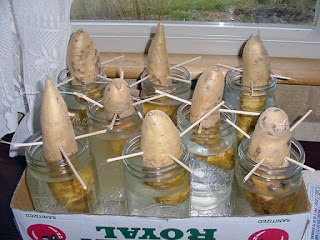 I did a triple batch because I wanted to freeze some.  In for a penny, in for a pound or so.  If this is your first time making gnocchi just do a pound batch.  Rolling and ridging the dumplings in quantity is mind-numbing.  However, if you have kids old enough to stay focused on a task they'll probably enjoy helping with this part. 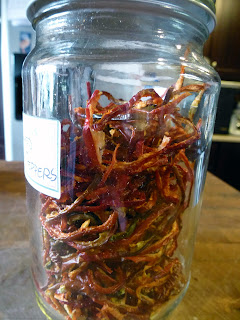 I liked the touch of heat the Serrano added and the pretty flecks of red against the orange of the potato from the Corno.

Directions
Heat the oven to 400F.  Unlike gnocchi made from white potatoes, bake the sweets until tender so the sugars concentrate and the flavor intensifies.  Allow to cool enough to handle and then pull off the skins. 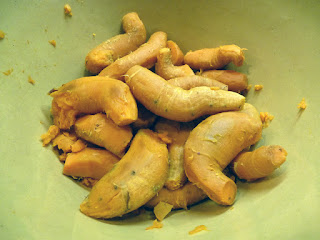 Put a small pot of salted water on the stove to boil.  This is your test pot.

Using a fork, potato masher, ricer, or food mill, mash the potatoes in a bowl along with a little salt and pepper and the red pepper flakes if using.  Do not use a processor or an electric mixer for this step.  Those can knock too much air out of the potatoes with gummy results.  Stir in a half cup of the flour. 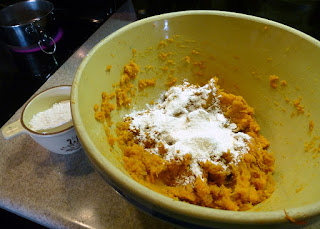 I prefer to mix by hand so I can better judge the proportion of flour to potato and the development of the dough.  It's going to be seriously sticky at first... 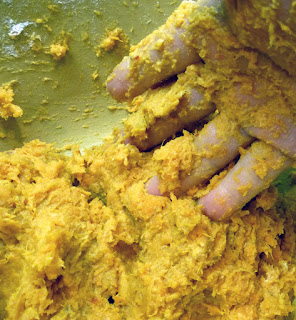 ...but persevere.  Mix in the rest of the flour and then a bit more as needed.  The goal is to add just enough flour that the gnocchi will hold its shape when cooked.  Pinch off a small piece and toss it into the pot of boiling water.  It's ready to test when it rises to the top.  Check to see if it held it's shape and then bite into it to test your seasoning.  If it fell apart or doesn't meet your flavor approval add a little more flour and/or adjust the seasoning and try again. 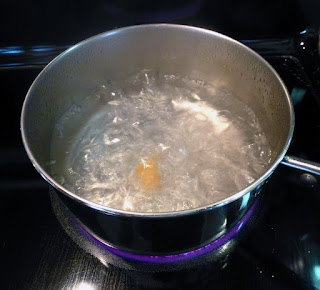 When the dough is ready it will still be slightly sticky but easier to handle.  Lay it on a floured surface. 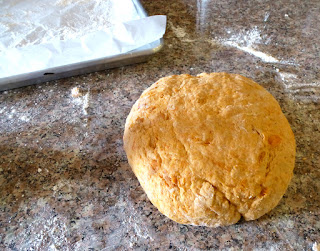 Line a baking sheet with parchment sprinkled with cornmeal.

Break off a piece of dough and roll it into a 1/2" thick snake then cut the snake into 1" pieces.  I found this easier to do using kitchen scissors than a knife and if you've got kids helping it's a safer way for them to snip their own snakes. 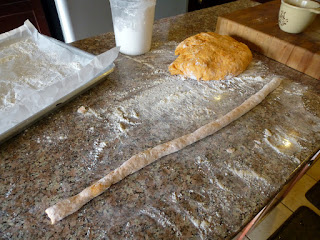 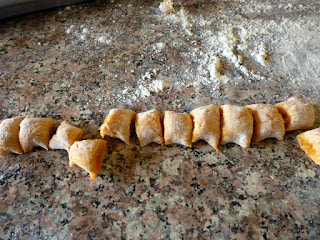 To get the traditional ridges and dimple shapes (and I wasn't coordinated enough to get a picture of this), press a dumpling with a fingertip against the the back of a fork at the top of the tines near the handle.  Lightly push it down the tines.  The result will be a dimple on one side (from your finger) and light ridges on the other (from the tines).  This shape allows the gnocchi to catch and hold the sauce.  Alternatively, just give the dumplings a dimple with your fingertip and be done with it. 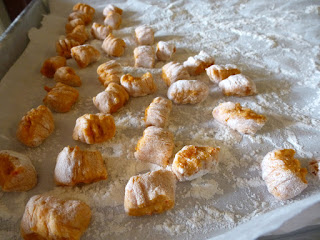 Since I made a giant batch of these, I set some aside for dinner and the rest I spread out in a single layer on baking sheets and froze.  Once the gnocchi were frozen solid I slipped them into a labeled dated freezer bag and stashed them for future use.

The gnocchi can be used immediately.  Cook just like pasta.  Bring a large pot of heavily salted water to a boil.  Slip in the gnocchi and give a stir so they don't stick to each other.  The gnocchi will sink and then rise to the top when they're ready.  Stir occasionally while they cook.  Reserve a cup of the cooking water and drain the gnocchi.  Sauce with your favorite sauce, adding a little of the reserved cooking water if it seems too dry.

I made a butter and sage sauce for mine.  I melted a stick of butter over low heat then poached 4-5 large cloves of garlic cut in thin slices in it until soft.  Next I added about 1/4 cup of sage leaves cut in a chiffonade (that's really fine ribbons).  Then I threw in about 4 cups of spinach leaves and tossed them until wilted.  Finally, I added the cooked sweet potato gnocchi and tossed them with the spinach and butter sauce.  When plated the gnocchi were topped off with a generous garnish of freshly, finely grated Asiago cheese.