Every once in awhile when pulling together supper from bits and pieces in the fridge you turn around and there before you lies a meal that appears to have been put together with lots of thought and labor.  From sprats and scraps arises the Accidental Feast. 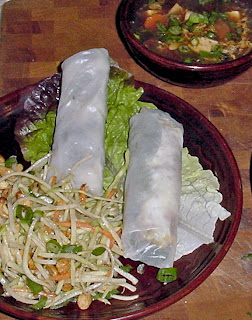 Such a feast ended up on our table Wednesday night.  We had a Gudjerati-style bean and lentil stew earlier in the week that we had remarked would be tasty as a sort of spring roll.  I pulled that and the spring roll skins out, some spinach that needed to be used, and whipped up a cucumber raita. 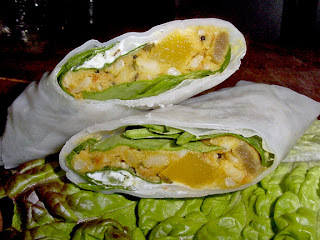 In the back of the fridge was 3/4 of a quart of stock.  A diagonally sliced carrot and stalk of celery, thin sliced whites of a scallion and a couple of thinly sliced garlic cloves, a dash each of soy and fish sauce, some reconstituted shitake mushrooms and their soaking water, a smidge of red chili paste, a can of bamboo shoots, a little tofu that had been overlooked, all brought to a simmer, then 2 beaten eggs stirred in created a flavorful Asian inspired soup. 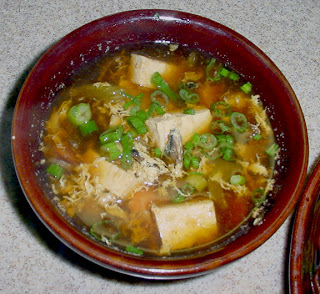 Finally, a bag of broccoli slaw tossed with peanuts and a dressing made of rice vinegar, a drizzle of dry sherry, canola and sesame oil, minced ginger and garlic, a sprinkle of sesame seeds, and a generous dollop of hoisin sauce gave us a nutty, sweet and sour, crunchy salad. 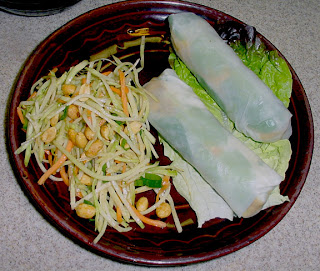 Sometimes, it just all comes out right.
Posted by Rebecca... at 8:09 PM