Cooking Floyd: Outside the Jar 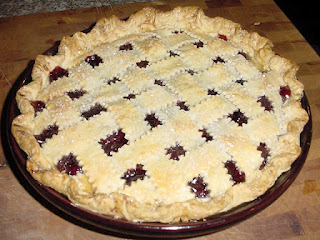 When you've got the main ingredients just waiting to be used, dessert is the time it takes to bake the crust away! 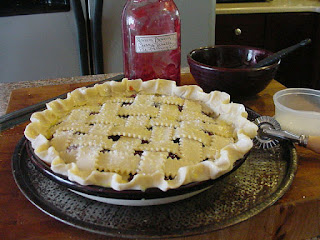 The pastry for this pie is the same as the one I use for Extreme Deep Dish Apple Pie minus the cheddar cheese.  When I make pie dough I make several batches and freeze what I'm not using in one crust packages for later.  So if I forget to set a package out to thaw, the pie isn't nearly so instant.  Or I break down and run to the store for an Already Pie Crust.  I admit it, if I need a quick dessert or I've had a senior moment, or that sudden craving demands PIE NOW!, I'm not too proud to fall back on Pillsbury.

The Cherry Vanilla Pie Filling was put up last June in quarts and pints. So far it's been used in cobbler and poured over ice cream and cheesecake.  This is it's first winter appearance as an actual pie.

All that's required is to line the pan with the crust, pour in the filling, and top with a second crust or a crumb topping.  Since all I was doing was assembling, I got fancy and cut strips with a ravioli wheel and wove them into a lattice top.  Then I brushed the crust with the egg wash and sprinkled on the sugar.

Since the filling is already cooked, the pie bakes in a 375F oven until the crust is nicely browned, about 35-40 minutes more or less.  Just watch the crust and pull it out when it reaches your desired degree of golden. 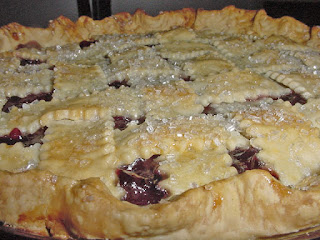 Allow the pie to cool for awhile so the filling sets back up.  Serve warm or at room temperature. 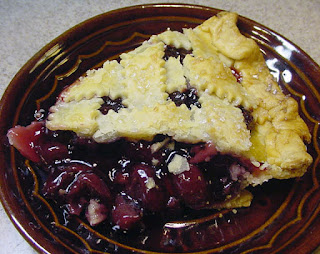