This week's meal consists of some traditional Southern comfort foods.  I'm a transplanted (damn) Yankee but tasty comfort is universal on a cold damp day. 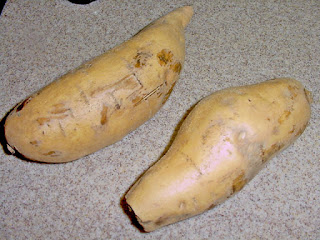 If you grow your own sweet potatoes you may have noticed that when first harvested and cooked they're actually bland.  Your first thoughts are "This variety does not live up to it's description." and/or "Either I did something wrong or it was a poor season."  But if you persevere, wrap them up and store them, you'll find that as winter progresses, those sweets will start converting their starches to sugars and a month or so down the road you'll have rich, sweet-tasting sweet potatoes.

Preheat the oven to 400F.  Place a rack on a cookie sheet or use a broiler pan and cover with a single layer of thick sliced hog jowl.  Put the rack in the oven and allow the slices to render and crisp up, about 45 minutes.  Remove and allow to cool. 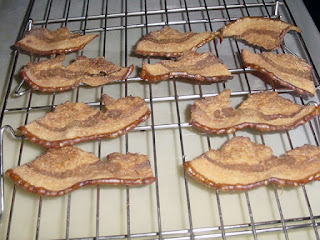 Don't throw out that rendered fat!  Put it in a jar and store it in the fridge.  A little bit of it used as a seasoning makes luscious oven browned potatoes or refried beans and it's excellent for making tamales.

When the slices are cool, crumble coarsely and set aside. 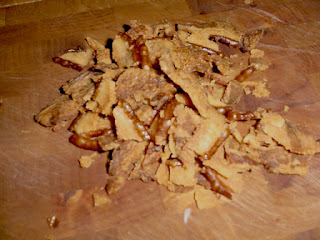 Although we had hog jowl where I grew up, I didn't know how to use it until I moved south and was invited to a New Year's Day Dinner where crispy flavorful jowls were served with the greens.

Quarter a small to medium head of cabbage and remove the core, then coarsely chop and set aside. 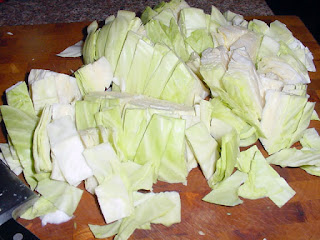 Next, take a couple slices of regular bacon, 3-4 garlic cloves, and the leaves from a couple of sprigs of rosemary, pile them and chop together until minced and well combined.  This is known as a battuto in Italian cooking.  Heat a heavy pan over medium heat and brown this mixture. 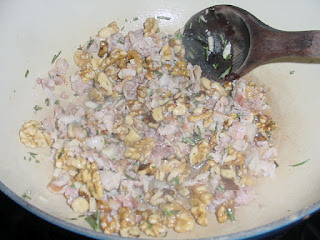 Normally I just use the battuto straight but I got the urge to throw a handful of walnuts in there.  Some of our dried apples occured to me too but I refrained and stayed with just the walnuts.

When the bacon has browned and the walnuts toasted, throw the chopped cabbage on top and ladle in a very little liquid.  I used maybe a scant half cup of chicken stock, but you could use any broth or stock, a splash of white wine, or just plain water. 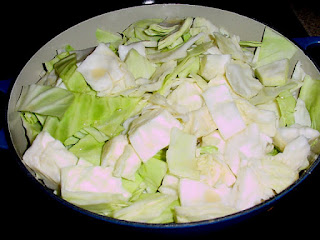 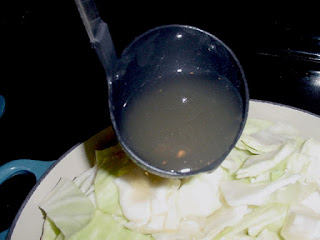 Put a lid on the pot and turn the heat down to low.  When the volume of the cabbage has reduced a little, stir the battuto up from the bottom and distribute through the cabbage. 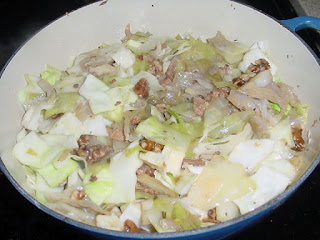 Simmer for two hours over a low heat, stirring occasionally.  When the cabbage is tender, salt and pepper to taste.

After the cabbage has been cooking for an hour, wrap the sweet potatoes in foil and place in the 400F oven.  Then prepare the black-eyed peas.

I was decidedly not local with the black-eyed peas.  This is something Michael and I are remedying this growing season.  We have plans to grow cannellini, garbanzoes, Jacob's Cattle, yellow-eyed peas, and goose beans as dry beans.  Our friend Julius is breaking ground for a new 50'x100' bed where the beans will grow.  Julius' ancestor held the original land grant that surrounds and includes the 4.5 acres we live on.  It gives me a sense of connectedness to be friends with Julius and his wife Eunice and inspiration to be a good caretaker of the land that is, in my eyes, still a part of their heritage.  But back to the beans...

I used two 15 oz cans of black eyed peas, rinsed and drained.  While the peas are draining, chop half of a medium onion.  In a heavy oven-proof pot that will just accommodate the peas, saute the onions in a bit of the hog jowl fat over medium heat until just soft. 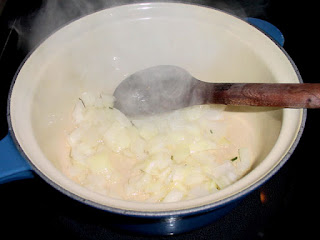 Add the peas and stir, then taste and season with salt and pepper.  Stir in the crispy, crumbled hog jowl, cover tightly and place in the oven with the sweet potatoes. 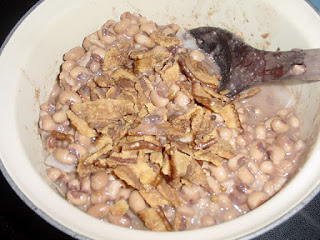 In approximately 45 minutes, or when the sweets poke tender, dinner will be ready. 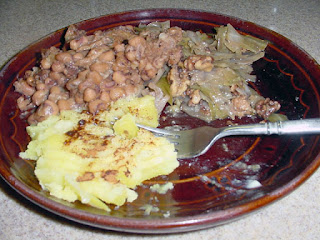