You've probably noticed I've been having great fun dehydrating and powdering all sorts of stuff this season.  Paprika was a revelation.  Tomato powder works just about everywhere.  Oh, and I did the same thing with the pulp leftover from making traditional pasta sauce.  That powder is a wonder.  I dried and powdered the damaged garlic cloves that wouldn't keep.  Same with the onions.  The onions were another surprise.  Just plain old yellow onions, sliced thin and dried until crispy, became sweet,   crunchy and oh-so-snackable!  This is what Funyons (remember Funyons?) and those nasty french fried onions-in-a-can wish they were.  Seriously, if you have to make that weird green bean and mushroom soup casserole for Thanksgiving, dry some onions of your own and crumble them on top.  Then powder the ones leftover.

I also dried and powdered carrots, celery, kale, and summer and winter squash.  One of my projects is to make a powdered vegetable bouillon, another is dried soups in a jar.  I'm having a blast using my new supply of culinary powders.

But what I'm talkin' about here is sweet red ripe ancho poblanos, grilled and powdered. 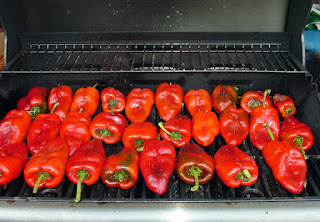 If you are unfamiliar with poblanos, they are the pepper typically used to make chile rellanos.  That's the cheese-stuffed green pepper that comes on your Grande Plate at your local Mexican restaurant.  Poblanos when allowed to ripen have all the sweetness of a red bell pepper backed up with a milder heat than the green poblano.

I was supposed to meet up with Jim to smoke these peppers before drying them but at the last minute he had to go out of town unexpectedly and I was one day away from vacation so I threw them on the grill to roast and get what smoky flavor I could into them. 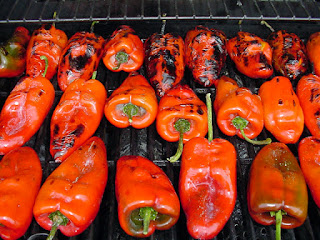 The back center of my grill is hotter than the rest of it so the peppers were rotated around and as they were blackened and ready like those in the back in the photo, they were removed to a towel covered bowl to cool.  If you don't have a grill, you can blister the peppers under the oven broiler or over a gas burner.

After the peppers cooled I removed the skins and slit them down one side so they would lie flat.  Then I removed the stem and gently scraped away the seeds.  Next I laid them flat on lightly oiled dehydrator screens.  If you are using your oven for drying you can spread the flat peppers on oiled cookie or cake cooling racks or directly on your oiled oven racks.  However you choose to do it, the peppers will dry better if air can circulate above and below them.  Remember to keep a close eye on things you dry in the oven on the lowest setting. 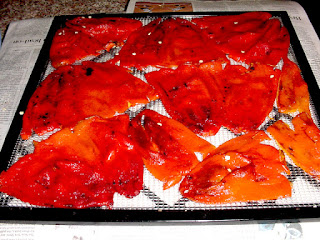 I dried these at 135F for about 8 hours.  When they were crispy dry I sent them for a spin through the coffee/spice grinder.  The resultant powder is rich and smoky and I'm very pleased with it.  I can only imagine how intense tasting this powder would have been had the peppers actually been mesquite smoked.

Tonight's temperatures are expected to plunge into the 30's so Shana and I gathered the last of all the varieties of peppers still out there today.  I ended up with a little under a half a bushel of pretty well ripened ancho poblanos and Jim's back in town so we may be able to fire up that smoker after all.