Folks who follow my blog may remember that I've been on a mission to create a pickled pepper resembling a peppadew.  Last year's attempt used mildly hot cherry peppers.  They were good in their own right but they weren't even close to a peppadew.  I had already decided at that time to try Joe's Hot Round peppers this year.  I did grow them and they are a beautiful little pepper, but while they were described as hot, not a single description had a Scoville rating.  Nor could I find one in an internet search.  Just let me say that this prolific little pepper has enough heat to immolate the entire county and make true pepperheads weep.  So they were unsuitable.


I decided to try using my beloved Mini-Bells. 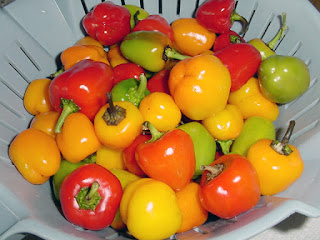 I adore these little bells.  I put them in salads, stuff them all kinds of ways, and pop them straight as snacks.  They're crispy, sweet and visually appealing.  Unfortunately, they're a hybrid.  No saving these seeds.  These were the last ones from the garden.

This is a very simple pickle.  It's a raw pack covered with a hot brine so the important thing is to have plenty of brine to cover the peppers.  Multiply the brine recipe to have enough for your pile of peppers.  When I packed the amount of peppers I had I ended up with 3 pints.  The brine recipe would have covered at least 4 pints worth.

Cut a thin slice off the stem end of the peppers and remove the seeds.  Thinly slice 1/2 onion (or more if you have more peppers, you're just adding a little flavor here) and toss it with the little bells. 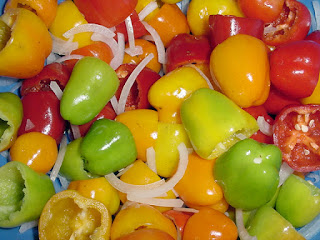 Place 1 clove of garlic and 1 small fresh hot pepper in each pint jar.  I used a Joe's Hot Round but you could use your choice of hot pepper.  Peppadews have just a little spicy heat to them.  The mini-bells are not hot so I'm aiming for a little infusion of heat via the pepper and the brine.  I put the pepper in whole so the hot, hot seeds and membranes won't come into direct contact with the brine. 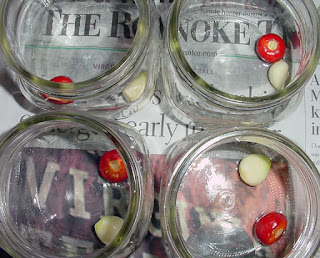 Next, combine the brine ingredients below and bring it to a boil:
3 cups apple cider vinegar

Keep an eye on the brine while it's heating and when it just begins to boil take it off the heat.  Otherwise it will boil over on you in a blink.

Place a layer of the mini-bells and onions in the jar and cover with a ladle of hot brine.  Work the brine around and into the little pepper cups to remove air bubbles.  Repeat until the jar is full, leaving 1/2" of head space.  It's easier to remove the air bubbles this way and even though you'll have some "fruit float" because it's a raw pack, you'll have a lot less.  Pack the peppers in as tightly and firmly as you can without crushing them. 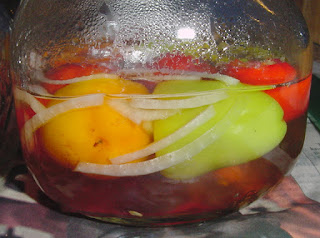 Wipe the rims clean and adjust lids.  Process the pints for 10 minutes at sea level (adjust processing time for your altitude. 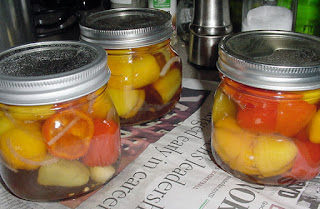 I'm optimistic that these little Bella-Dews are the end of my quest.  They'll need to sit for a few weeks for the flavor to develop.  Thanksgiving seems like a good time to crack open a jar and find out.  I'll report back then.

Update:  Here it is March 2013 and I'm just getting back on the results of my Bella-Dew experiment.  All the pints have been opened and eaten and were delicious!  This is the closest I've come in my search for a home-grown, home-canned Peppadew substitute and I'm very satisfied.  The Joe's Hot Round Pepper actually infused a little more heat into the baby bells than I was expecting so I'll be going with a Serrano or Cayenne in this year's batch.  The hint of smokey flavor that I taste in a Peppadew was also missing so I may add a drop of liquid smoke to the sweet brine as well.  But all-in-all these are what I've been looking for!
Posted by Rebecca... at 5:15 PM