We came home from vacation to find the garden nipped by an extremely early first frost.  We were hoping for another month of growth on the sweet potatoes but rather than take a chance Michael dug up the spuds.  Turns out there was a bumper crop under the ground and even though an extra month would have made what was there larger, there are more than enough sweets to get us through winter.  And have seed potatoes to start next year's slips.
Sweet potatoes are easy to cure and store.  Here's how:

Sweet potatoes should be dug in late fall since the tubers will increase dramatically in size during September to October.  Sometimes, like this year, Mother Nature dictates that they be dug sooner but the goal is to dig them just before or immediately after the first hard frost.  If the vines and leaves are blackened and rubbery, it's time for them to come out.  The theory is sweets left in the ground after a frost will be off-flavored and poor keepers.  I don't know if that's so but we're not taking any chances.

We grew Beauregards, an early smaller sweet that's orange in and orange out and an unknown variety of white sweets from the grocery store that I used to start slips.  Michael found the Beauregards growing all over the place in their half of the bed.  The grocery store sweets were growing in vertical clumps of 6-8 tubers.  Our previous experience with slips was finding the tubers all over the place which led us to believe the growing habit of our unknown variety was the result of breeding for mechanical harvest.
After you've carefully lifted the sweets out of the ground let them air-dry for 12-24 hours, then gently brush off the loose soil.  Don't rub hard, you don't want to scratch open the thin skins.

Next the sweets need to be cured.  It's recommended to cure them at 80-85F in high humidity. However, if it's frosting here the temperature isn't hitting the 80's either.  I've taken to laying out the sweets in a layer or two in soda crates and box lids, placing them in the sunniest windows (or where the sun hits the floor) and covering them with a damp towel.  If you have a wood stove and it's fired up, place them in the warmest spot next to it covered with a damp towel.  At any rate, find the warmest spot you can for curing.  I think the highest the temperature's reached for me when curing is 74-76F and they've cured just fine.  Leave the sweets to cure for 10-14 days.

After the sweets have cured sort them by size and condition.  The largest sweets will keep the longest and actually improve in flavor during storage. 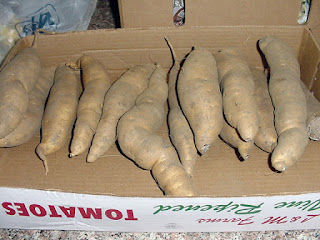 The smallest tubers will not store well and should be eaten first as should any that have been damaged. 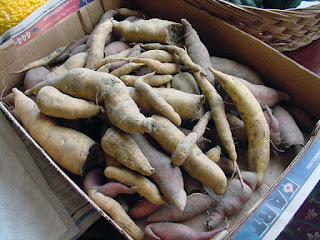 Once you've graded the potatoes wrap them individually in newspaper starting with the largest ones first and layer them into boxes or baskets. 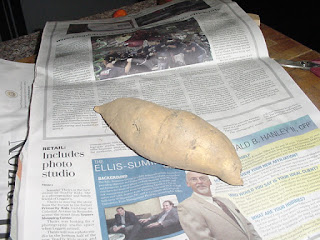 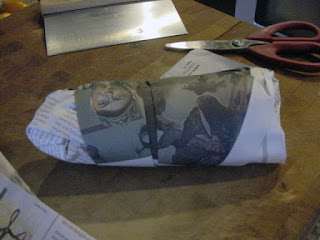 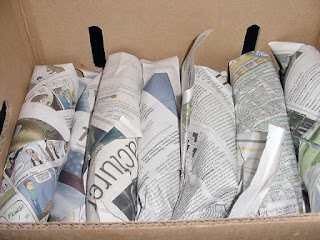 When the potatoes are wrapped and packed the small and medium ones will be on the top to be eaten first and the large ones which store the longest will be on the bottom.  Remember to save some of these big beauties to start slips for next year's garden.  I've found that slips are best started in December or January in order to have lots to plant out.  Instructions for starting slips are here. 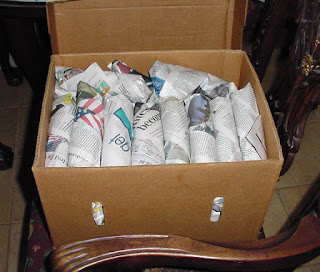 Best storage for the sweets is in an unheated room that stays around 50-60F during the day.  I've been successful storing my sweets in our basement which runs 65-68F.  Don't try storing them in a refrigerator because the humidity is way too high.  Once cured the spuds do best kept at the same humidity levels that people like.

After that I'm left with a fair pile of reject tubers that are perfectly fine but won't store.  These will get boiled or baked until just tender.  Then some will be sliced and dehydrated, some will get pureed and frozen, and some will get pureed and dehydrated, then powdered.  But none will be pureed and canned.  Sweet potato puree, along with pumpkin and squash puree is too dense to heat to proper temperatures in the center of the jars whether waterbathed or pressure canned.  You may pressure can chunks of sweet potato in syrup or water.  Instructions for that can be found here.

Whether you've grown them or bought in sweet potatoes are easy to cure and store.  We look forward to them in pies, curries, soups, risottos, casseroles, and simply baked with butter and cinnamon.
Posted by Rebecca... at 4:07 PM