I'm doing a double post today on salted caramel pear butter that I canned using Tattler reusable canning lids.  I get a lot of questions about Tattler lids.  This is the first time I've used them. 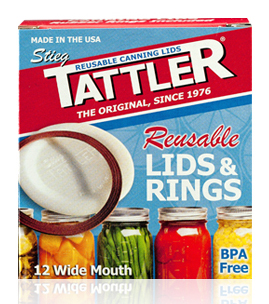 I, like many canners, really dislike the expense of new lids every time, but when using the typical two-piece sealing system new lids are a necessity.  That's because once the sealing compound on the lids has been vacuum sealed in a water bath or pressure canner it's lifetime is over, the compound is compromised.  You may get another seal out of that lid but it's not reliable, it could lose its gripping power at anytime.  The Tattler system is an update of the old bail and gasket system.  It uses a rubber gasket, a BPA-free recyclable plastic lid, and the rings you already have.  While the lids and gaskets are an initial investment, the ability to reuse them several times over makes them more economical to use than new metal lids every time you can.  All that having been said, the food science people at Virginia Tech couldn't give me a definitive answer about the efficacy/safety of Tattler lids since they haven't done any testing on them.   I'm reporting my personal experience and opinion here, not a recommendation.

So let's get on to the real reason we're here: Salted Caramel Pear Butter!

I made a batch of this last year and it was mighty tasty.  This year's batch was superb and I can only attribute that to the pears.  In both cases I used pears of unknown variety from someone's back yard.  Maybe this was an excellent pear year or maybe it was the variety but we're talking O.M.G. good! 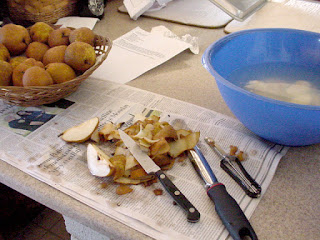 This recipe uses roughly three and a half pounds of quartered, cored, and peeled pears with a yield of three to four half pint jars.  It can easily be multiplied to accommodate any amount of pears.  Use fully ripened pears, pears so ripe that in another day or two they may be over the hill.  Cut out any bruises, bug bites or soft spots.  As I prep them I toss the quarters into water that's been acidified with lemon juice to prevent browning.  You're going to be cooking these pears down to a rich mahogany color so this step probably isn't necessary.  For me it's just habit.

When the pears are prepped combine them in a non-reactive pot with 1/4 cup of apple juice or cider and 3 tablespoons of lemon juice.  Bring the pot to a boil over medium heat, then lower the heat, cover and gently simmer the pears until they are very tender and nearly translucent, stirring regularly. 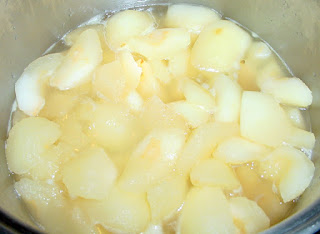 While the pears simmer they will create an abundance of their own juice.

When the pears are tender, puree them in a food processor, blender, or food mill or right in the pot with an immersion blender.  Add two more tablespoons of lemon juice, 1 1/2 cups of light brown sugar, 1 teaspoon of ground nutmeg, 1/2 teaspoon of vanilla extract and 3/4 teaspoon of really good salt.  Bring to a gentle boil and stir until the sugar dissolves.  Then reduce the heat to medium-low and cook uncovered until thick.  Stir frequently to prevent scorching, stirring more often as the butter thickens.  If you're making a huge batch of it you can put it in a casserole or roasting pan and reduce it in a 400F oven.  You'll still have to stir it, but less frequently with reduced chance of scorching.  Alternatively you can cook it down in a slow cooker with the lid off.

A note about the nutmeg and salt:  Already ground nutmeg works well in this recipe.  Whole nutmeg, freshly ground, is way better.  You can smell and taste the difference.  So, if you have access to whole nutmegs and a way to grate them (I used a microplane grater) go for it.
Unless you're a serious salt hound, don't use table salt.  Its really fine grains actually put more salt in the measurement than a larger grained kosher or sea salt.  At a minimum, use kosher salt.  I used a minerally Celtic sea salt. 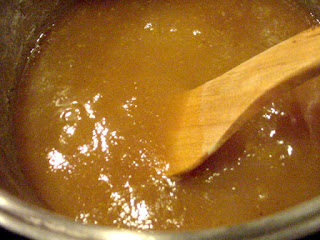 When the pear butter is ready a spoonful on a plate will not spread a lot and liquid won't separate from it. 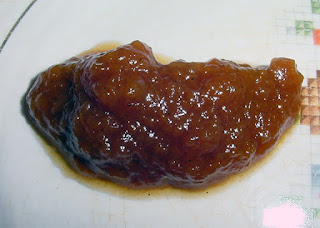 Ladle the pear butter into half pint jars, leaving 1/4" head space.  Wipe rims clean.  If you're using the standard 2-piece lids go ahead and adjust lids and seal.

Here's where we're going to get into the Tattler lids.  If you are a novice canner, in my opinion, stick with the standard metal 2-piece system for a couple of canning seasons until you are confident with canning and handling the lids.

Tattlers are a 3-piece system consisting of a rubber gasket, a plastic lid, and a ring or band.  Just like metal lids, place the gaskets and plastic lids in a bowl and cover with very hot water. Follow your recipe as written leaving the recommended amount of head space and wipe the rims.  Next, place the rubber gasket on the rim of the jar. 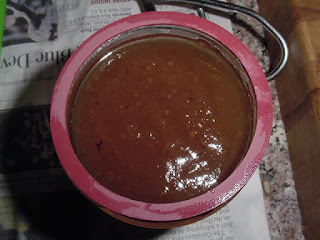 A pair of tongs is handy here because your magnet lid lifter won't work and the water's too hot to reach into.

Tattler lids look different than the metal lids.  They have a lip on the bottom which I had never noticed in photos I'd seen of them.  It actually helps center the lid. 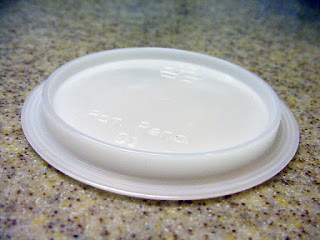 Place the lid on top of the gasket and then place a ring on the jar and just start it.  Then place a finger in the center of the lid and press down while screwing the ring in place.  As with a metal lid, you want the ring to be just finger tight.  Do not crank the ring down. 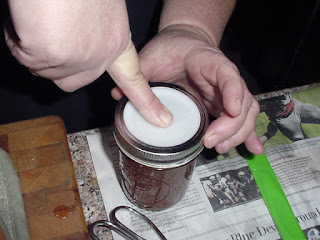 Place the jars in the waterbath and process them for 10 minutes at sea level.  Adjust the time for your altitude.  Here in Floyd that's 15 minutes.

This next step differs from metal lids.  As soon as you pull the jars from the canner, screw the rings on the Tattler lids down tight.  Allow to sit undisturbed for 24 hours.  If you like to listen for the pings of the metal lids sealing like I do, you're going to be disappointed here.  Plastic doesn't ping.  So you're really not going to be sure of a seal until you remove the rings the next day and wash the jars. 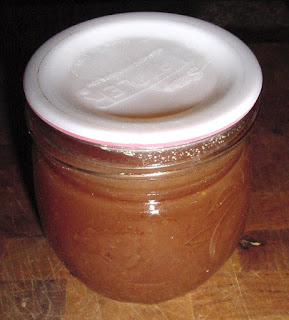 As with metal lid jars, pick the Tattler-topped jars up by the edges to makes sure the seal is secure. 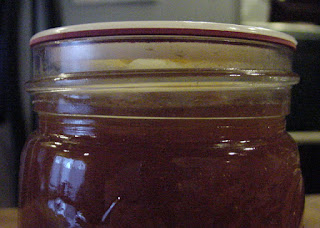 Label and date the pear butter before storage.

This year's pear butter is smooth, salty-sweet and flowery with a noticeably distinct buttery taste and mouth feel even though there's no butter in the recipe.  That's what makes me think the pears made the difference.  Neither Michael nor I remember that whole very buttery thing going on in last year's batch.  A jar of this will definitely be going into competition!

A word about Tattler lids and competition.  Since Tattler lids have yet to be tested and approved for use by the National Center for Home Food Preservation they generally are not accepted as a seal in competition.  If you plan to compete use a standard metal lid seal on a number of jars.  They can be processed along with the Tattlers in the same water bath.
Posted by Rebecca... at 12:17 PM