I was following a thread awhile back on Chowhound about Dorie Greenspan's book Around My French Table.  One of the recipes everyone was raving about was "Pumpkin Stuffed with Everything Good".  Bacon was involved, and cheese and heavy cream.  Of course everyone knows that bacon and cheese, separately or together, make everything better.  And Julia Child said if you can't use butter use cream.  I rarely argue with Julia.  So, armed with my trusty knife I set about disemboweling a Kuri squash. 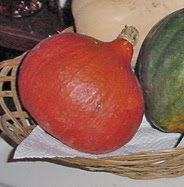 This is a recipe that lends itself to customization to your own tastes.  Dorie started playing with the recipe back in 2008 as "Pumpkin Packed with Bread and Cheese, a Recipe in Progress" and evolved it into "Pumpkin Stuffed with Everything Good" which is the recipe I used as a guideline.  Here's Dorie's recipe (Which I couldn't find on her website for some reason.  I know it's there.).

Directions
Preheat oven to 350 degrees with a rack set in the center of the oven. Line a baking sheet with a nonstick baking mat or use a Dutch oven that is slightly larger in diameter than your pumpkin (in which case, you will need to serve your pumpkin from the Dutch oven, as it may stick, but it will keep its shape better this way).

Using a sharp, sturdy knife, cut off top of pumpkin, working around the top with the knife inserted at a 45-degree angle to cut off enough to make it easy to work inside the pumpkin; reserve top. Remove seeds and strings from cap and pumpkin. Season inside of pumpkin generously with salt and pepper. Place on prepared baking sheet or in Dutch oven; set aside.

In a large bowl, toss together bread, cheese, garlic, bacon, chives, and thyme until well combined. Pack into pumpkin; it should be well filled but not overstuffed. You may need to add some bread and cheese or some of the filling may not be necessary to use. In a small bowl, stir cream and nutmeg to combine. Pour over filling; filling should be moist but not swimming in cream -- you may need to use more or less accordingly.

Place top on pumpkin and transfer to oven; cook until filling is bubbling and pumpkin flesh is tender, about 1 hour and 30 minutes. Remove top and continue baking until liquid is slightly evaporated and top of filling is browned, 20 to 30 minutes more.

Carefully transfer pumpkin to a serving platter (or serve in Dutch oven, if using) and serve.

In addition to the above recipe Dorie includes this note in her book which she calls a "Bonne Idée":
"There are many ways to vary this arts-and-crafts project. Instead of bread, I've filled the pumpkin with cooked rice—when it's baked, it's almost risotto-like. And, with either bread or rice, on different occasions I've added cooked spinach, kale, chard, or peas (the peas came straight from the freezer). I’ve made it without bacon (a wonderful vegetarian dish), and I’ve also made it and loved, loved, loved it with cooked sausage meat; cubes of ham are also a good idea. Nuts are a great addition, as are chunks of apple or pear or pieces of chestnut."


Having never made this recipe before, right off the bat I started changing things out using what I had on hand.  I used the Kuri squash instead of the pumpkin.  To keep the squash (or pumpkin) from rolling all over while you're working with it and standing upright while cooking cut a very thin slice off the bottom. 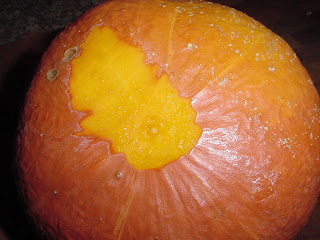 Cut a lid into the top of the squash like you would a jack-o-lantern and remove the seeds and strings.
Line a baking sheet with a silpat, or oiled parchment or foil.  You'll be glad you did.
Salt and pepper the inside of the squash 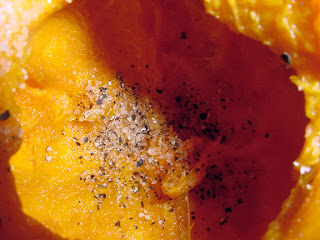 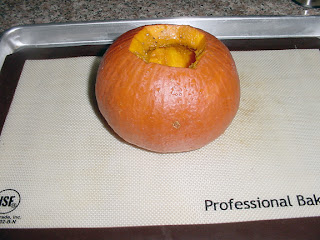 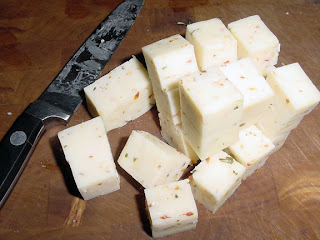 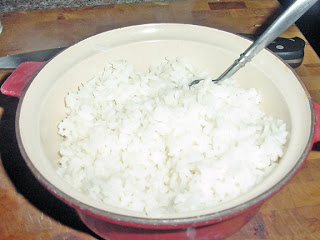 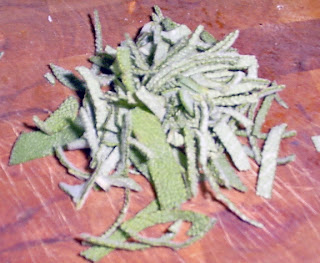 a minced shallot as well as the garlic, 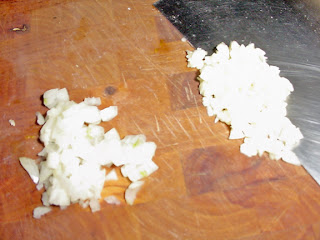 flaked smoked trout instead of bacon,
mushrooms, half and half instead of heavy cream, and quatre epices instead of nutmeg.  Because I really liked the spice blend in butternut squash.

All the ingredients except the half and half were tossed together in a bowl, mixed well, tasted for seasoning and then stuffed firmly into the pumpkin.  Then I poked my finger into the center of the stuffing to make a well and dribbled in the half and half.  (Sorry, I don't have a pic.  One was seriously overexposed and the other was way too dark.)  Then I put the lid back on and the squash was ready for the oven.  I had some stuffing left over so I put that in a foil packet and stuck it in with the squash. 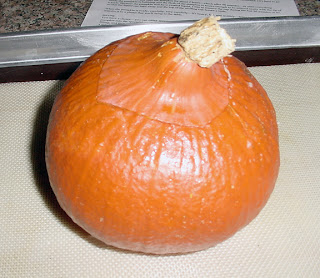 Since my squash was smaller than 3 lbs it took less time in the oven.  It tested done in about an hour and a quarter.  I took the lid off and opened the packet a bit and put it back in the oven for another 15 minutes to brown the top of the stuffing.  Next time I'll test earlier and open the top for longer to get a better brown.  The stuffing was very liquidy and needed a little more time to reduce to my preference.
We were eating this as an entree for dinner so I split it between the two of us.  I was very happy that it held its shape when I cut it and it transferred easily to the plate with tongs and a spatula. 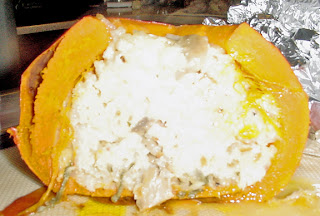 As Dorie said, using the rice made the stuffing very risotto-like and the flavors I chose blended together nicely.  Accompanied by a green salad with sweet balsamic vinaigrette, this meal definitely fell into the comfort food category and will be repeated again.  Soon.  I think it would be fun to serve guests each with their own individual sized pumpkin.

What I would do different:
Next time I'll use bacon instead of the smoked trout.  The trout was good but I want a more assertive smokey flavor.  I'll add steamed greens of some sort and maybe pecans or walnuts.  I definitely want to try it with bread instead of rice because I love bread stuffing.  Another time I'm going to go with Dorie's suggestion of sausage and mix it up with a tart apple, some cranberries, and a handful of pepitas.

I think this recipe is going to become a favorite of mine because there's just so much room to play! 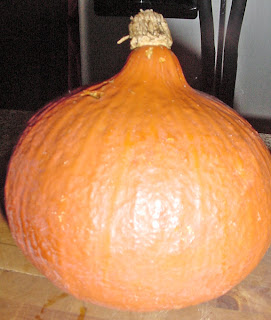