Preserving Floyd: The Last of the Red Hot Peppers. I Promise!

One morning last week on my way into the diner for coffee Julius passed me on the way out.  "Frost on the pumpkin tonight!", he said.  I took his warning to heart.  If anyone around here knows when the first frost is going to hit it's Julius.  His family's been working the land here going back to the original grant given to one of his ancestors.  In fact, once upon a time our 4.5 acres were part of that land grant.  Later that afternoon I picked the last of the hot and sweet peppers and pulled up the plants.  I diced and froze a lot of the sweets but the small ones that would hold a tablespoon of stuffing I filled and froze for appetizers for a dinner party or potluck.  That left me with a small pile of hots to put up somehow. 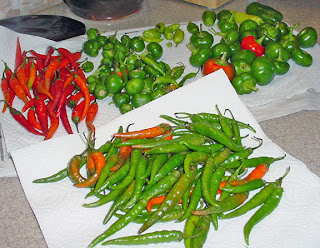 My original plan was to come up with a flavorful sweet-tart brine and pickle the bittiest peppers into something called "Baby Bursts".  I figured they'd be good to drop in certain cocktails, or as a garnish or something, but there just weren't enough tiny ones to make that project worthwhile.  I still think it's a good idea but I'll have to pick specifically for it next year.  I decided to make hot sauce instead.

Michael and I don't like screamingly hot rip-the-cells-off-your-tongue food.  We're both of the opinion that if you can't taste the flavor of the food, if the only sensation you have is all the imps of hell are dancing in your mouth, then the food is a fail.  However, if the food is hot enough to give your mouth a good glow, that's our spicy heat level.  On a scale of 1-10, none of the peppers we grew went higher than a 5 so I figured I would make a nicely spicy hot sauce with the last of them.  In the above photo you can see I was working with mostly cayennes and cherries, with a couple of poblanos and a hot wax thrown in.  Most of them were still green.

You should probably wear gloves while working with hot peppers.  I have a reaction to latex so I try to handle the peppers only by the stems, use tongs and a bench knife to move them around, and wash my hands with soap a lot throughout the process.

Directions
Count the number of chilies you're using, then adjust the ingredients for multiples of 12.  Trim the caps and stems off the chilies.  You can deseed them and remove the membranes if you want a possibly milder product.

In a non-reactive saucepan, boil the chilies and garlic in the vinegar until tender. This will take only a few minutes.  If you have an effective range hood fan you're going to want to run it.  In any case you should crack the windows.  I didn't think the quantity of peppers was large enough or would be cooking long enough to fill the house with fumes.  I was wrong.  I was a lot wrong. 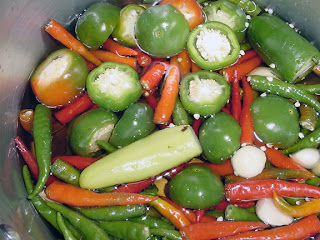 When the peppers are tender, remove them from the vinegar with a slotted spoon and place in a blender or processor with the salt and sugar, and puree.  Reserve the vinegar. 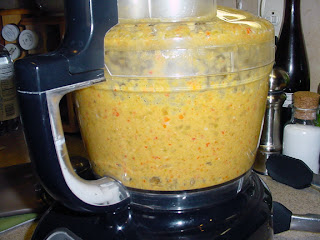 Now you saw I used green and red peppers.  How they got to yellow during the puree is a mystery to me.  But it's a nice color.

Next, I sieved the puree.  This isn't necessary and you can see that the red-flecked paste is attractive, but I wanted a smooth sauce. 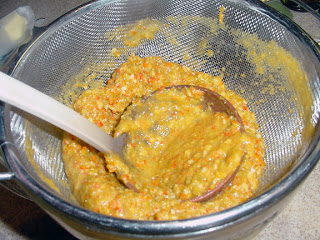 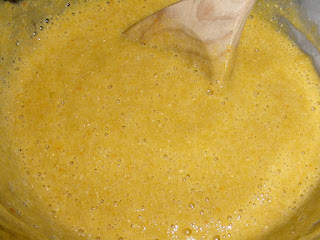 Whether you've sieved it or not, dilute this paste with the reserved vinegar until it is the consistency of cream. 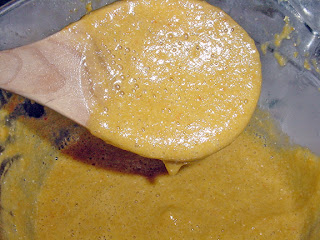 Pour the hot sauce into small sterilized bottles, cap tightly, label, date, and store in the refrigerator.  I bottled the sauce in 4 glass spice jars.  When I tasted it, I realized that one jar was potent enough to see Michael and I through the year.  That leaves 3 jars to gift pepperhead friends with!

If you have hot pepper flavored vinegar left over be sure to strain and bottle that as well.  It comes in handy to add a little zip to all kinds of things.  Deviled eggs love it!