Michael brought home his first deer of the season, a button buck.  That's a young male deer just beginning to grow antlers.  He shot it in late afternoon so by the time he got home with it we were losing the light.  It became imperative to get it skinned, quartered and into the fridge because (a)the nighttime temperature was going to be too warm for me to feel comfortable about hanging it overnight and (b)we have no safe place to hang it where the coyotes, fox, and the neighbor's Labradors won't get at it.  Taking you through the steps of processing a deer for the freezer will have to wait until Michael (hopefully) gets the next one in the morning.

We decided to make really good stock and can the meat from this deer.  Since this was a yearling buck it's meat is already veal-like.  Canning should make it meltingly tender.

The evening Michael brought the deer home we skinned it and then I carefully removed the tenderloins and the backstraps and cleaned and trimmed them.  These were wrapped tightly in plastic wrap and placed in freezer bags.  As much air was expelled from the bags as possible, they were labeled and then placed in the freezer.  Backstraps and tenderloins are the prime cuts of the deer similar to beef filets.  I love them sliced into 1 1/2-2" inch thick filets, stuffed with blue cheese, wrapped with bacon, and then quickly pan-seared.  There will definitely be a post on that! We then quartered the beast, wrapped it in plastic and refrigerated it.

Canning venison is a two-three day project for me.  I want a really tasty broth to can with and that takes a full 24 hours to simmer.  Then I fit the other steps around my other daily activities.  If you already have stock, use canned stock or can with water you can cut the time considerably.

Day 1
Now that the carcass was in more manageable quarters, the next day I was able to bring it into the kitchen, a quarter at a time, to begin processing it. I placed my big stockpot half filled with water to come to a boil.  I tossed in a pound of carrots in chunks, about as much celery in chunks, four large onions with the tight skins still on cut in half, a quarter of a cup of whole peppercorns, and a large bunch of flat leaf parsley, roughly cut.  I covered my kitchen island with a sheet of heavy plastic held in place with a bungee cord.  At this point, cutting the meat is not a messy, bloody process but protecting my work surface with plastic makes clean-up much easier and and lessens the possibility of cross contamination if I miss a spot.

No matter how careful you are while skinning a deer there's always going to be hair on the meat.  I rinsed the whole quarter under cold water, wiping off as much hair as possible with paper towels.  I dried it and placed it on my work surface for closer inspection.  Using a clean dishcloth moistened with distilled white vinegar I wiped off any remaining hair.  I use bundles of cheap dishcloths from the dollar store when processing deer because I find that, dampened with the vinegar, they are almost magical at removing stubborn hairs from the meat.  When done with them I just throw them out.

Next I began feeling along the quarter for the individual muscles and cutting them out whole.  This isn't difficult on the rear quarters, or hams.  The divisions are readily apparent and the muscles will separate easily.  The forequarters, or shoulders, are a little harder.  With these I removed the large muscles that came off easily and some larger pieces of meat irregardless of muscle definition.  In both cases, once the meat was removed I disjointed the bones and added them to the stock pot.  Then I trimmed up the pieces of meat.  Any small bits of meat went into the pot.  On many of the muscles you'll see a silvery membrane that's called silverskin.  I slipped a filet knife under this and removed as much as possible with as little meat as possible attached.  This is thrown out.  Any fat bits were trimmed off and thrown out.  Since there is very little meat on the ribs and shanks these were put into the stock pot as is.  The trimmed meat was bagged and returned to the fridge.  I turned the heat under the stock pot down to a bare simmer, put on the lid, and left the stock to cook overnight.

Day 2
The next day I strained the meat, bones and veggies out of the stock.  All the flavor is now in the stock and I'm left with this big bowl of useless-to-me stuff. 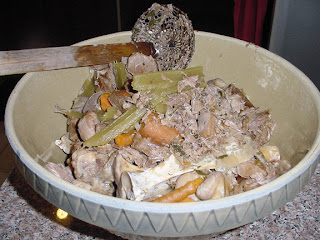 I get rid of all the small bones, save all the big bones, mush the meat and veggies together and give it to my neighbor for his dogs.  They get tasty chew toys, a flavorful (to them), nutritional addition to their kibble, and I feel good about not wasting it.  Or, you can throw it out.

I brought the strained stock back up to an active simmer and reduced the liquid by half, intensifying the flavor.  Once reduced, I ladled it through a strainer into gallon jars. 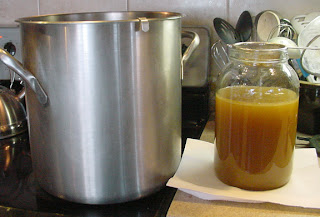 The stock is allowed to cool slightly, then moved to the fridge overnight.  The sediment will fall to the bottom and the fat will float to the top and harden.  The next day I'll remove the cap of fat and carefully pour the stock off the sediment. 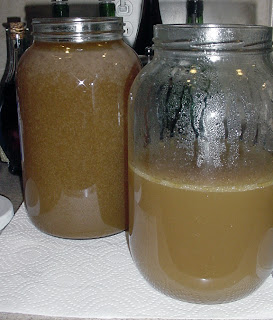 While the stock was cooling, I returned to the meat.  The meat is cut in strips 1-2" thick and of a length to fit the jar.  1" of head space is required when canning meat so I cut my strips to fit to the shoulder of the jar.  This allows the meat to be well covered by the stock and still leave a generous 1" of headspace. 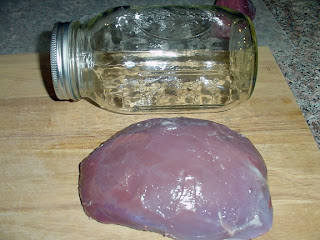 This last trim is the final opportunity to inspect the meat and make sure it's clean and free of any tiny hairs.

After cutting the meat I had a pile of  thick strips of venison ready for canning and a nice pile of trimmings that I cubed for other uses.  These cubes will be frozen and added to if we are able to harvest another deer.  Some will be kept for stew and the rest will be ground into burger. 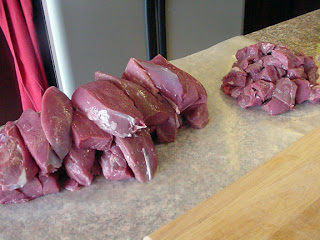 Day 3
The first thing I did was to give the meat strips a quick pan sear.  I do this for cosmetic reasons.  The canned meat will be an appetizing rosy brown instead of gray.  I sear over high heat with a bare minimum of oil and only as long as it takes for the meat to release from the pan.  The inside is completely rare. 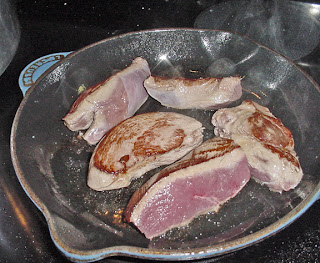 When the meat was all seared I put it in the oven to keep warm while I set up the pressure canner and placed another large pot for the stock on the stove.  I removed the cap of fat and ladled the jellied stock into its pot to be brought to a boil. 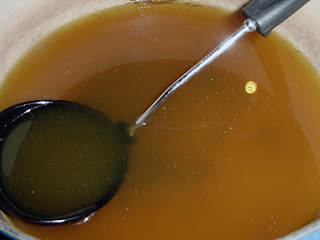 When everything was heated up I packed the strips of meat into quart jars and ladled in the hot stock, tapping the jars on a padded surface to remove air bubbles.  I covered the meat completely with the stock leaving a generous 1" of head space.  Then I wiped the rim with a paper towel moistened with distilled white vinegar and adjusted the lid.  As each jar was finished I put it immediately into the canner to stay as hot as possible while the other jars were being filled. 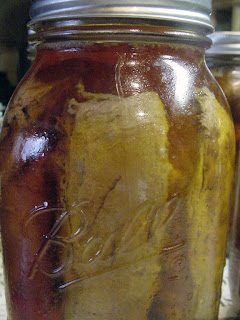 When the pressure canner was loaded I put on the lid, allowed it to vent for 10 minutes, then dropped on the weight and brought it up to pressure.  The Ball Blue Book recommends 10 lbs of pressure at sea level.  Here in Floyd I adjust my pressure to 13 lbs to accomodate my altitude of 2200 feet and the fact that my gauge tests a pound light.  (Test your gauges regularly at your local co-op extension!).  Once I reached 13 lbs of pressure the quarts processed for 90 minutes.  Keep an eye on your canner and don't let the pressure fall below your poundage or you'll have to start timing all over from the beginning once you bring the pressure back up!  After 90 minutes I turned off the heat and removed the canner from the heated burner.  Now the pressure must be allowed to zero out on its own.  Once all the pressure was gone, I carefully removed the jars to a padded surface to cool.  Be sure to allow the jars to cool undisturbed for 24 hours.  They will continue to boil inside for quite awhile and you'll be able to see the bubbles moving.

I had 3 quarts of good stock left after canning so when the meat was done I brought the stock to a boil, poured it into jars with 1" of head space and processed those in the canner at the same pressure but for 25 minutes.  I did quarts but pints process for the same amount of time and pressure as well.  If you have the space, freezing extra stock is a good alternative.

Tomorrow I'll wash the jars, check the seals, label and date them. 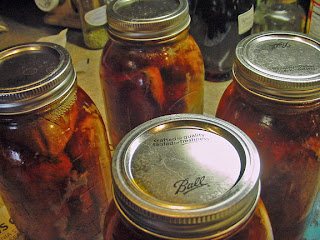