We had a Thanksgiving Feast First this year.  Our first free-range turkey and my first experience brining a turkey.  Michael's been trying for a few years to bring home a wild turkey but has been unsuccessful so far.  They taunt him.  They brazenly show themselves in large numbers, flaunting their feathers at him when he's out hunting deer, presenting and holding still for the perfect shot, knowing full well that they are out of season and perfectly safe because Michael is an ethical hunter and won't shoot them.  As soon as turkey season arrives - POOF - they're gone.  Not a turkey to be seen.  I, pining to cook a wild turkey and being (ahem) maybe a little less ethical than my husband, have been saying, "Ef 'em! Shoot the bastard!  I wanna cook it!"  Michael smiles tolerantly at me and keeps me honest.  So this year he bought me a free-range turkey from our friends at Indigo Seafood.  I admit to suffering sticker shock, being used to .57/lb giants from the supermarket, but the point is to get away from factory farmed animals and without government subsidies and with responsible animal husbandry comes a higher reality-based price, as opposed to the artificial low price supported ultimately by the taxes we pay. 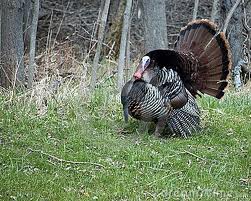 Without a doubt and with unanimous agreement of everyone sitting around our holiday table, that was the best damn turkey we've ever eaten!  We will be raising a couple-three turkeys for next year's feasts!

Our feast started with nibbles for folks while I was putting the final touches on the main event. 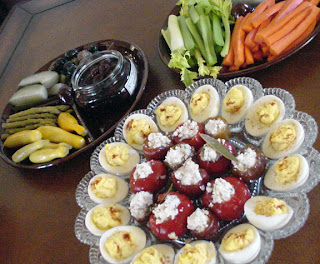 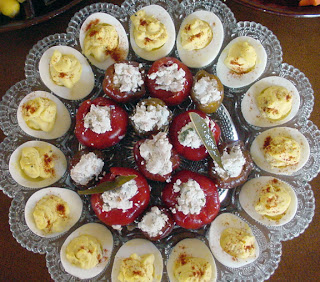 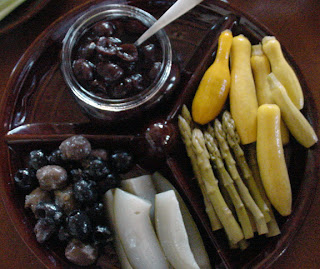 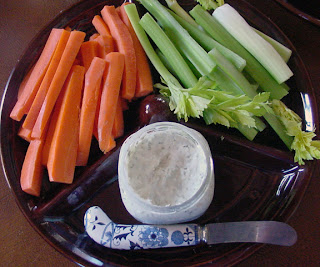 While folks were noshing, the turkey was resting. 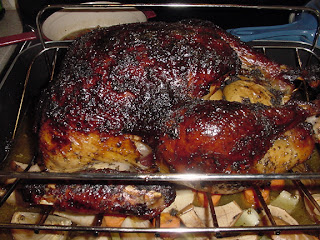 While the turkey rested, gravy was made and apple-cranberry-walnut stuffing appeared.  Although in this instance it might actually have been dressing since I was warned to bake it separately from the brined turkey.  Seems stuffing cooked inside a brined turkey becomes way too salty.  Which inspired the conversation about "stuffing" being a Yankee term and "dressing" being a Southern term and was it just different names for the same thing or is it stuffing when it's cooked inside the bird and dressing when it's cooked outside the bird and does it really matter anyway once gravy is applied?  But in any case, I stuffed the bird with Granny Smith Apple halves running on the theory that the apples would perfume the meat and provide extra moisture. 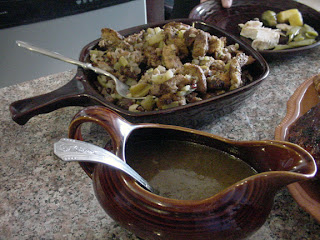 And then there was oven roasted, maple glazed acorn squash, parsnips, and Brussels sprouts with pecans from our son James' tree.  So far this recipe has converted a number of Brussels sprouts haters.  Maple syrup and butter can make a lot of things better!  And two quarts of our canned Romano green beans.  With butter. 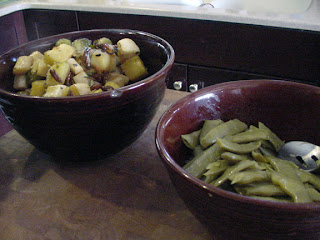 Next, while everybody was distracted with appetizers, drinks and conversation, I wrestled the turkey into submission and onto the platter.  Because I think that only in Norman Rockwell paintings and through the magic of old movies and TV shows does anyone ever expertly carve a turkey at the table with the flair and finesse deserving of an audience.  Certainly not me.  I flip that bugger this way and that while applying all the appropriate cuss magic words it takes to get the job done. 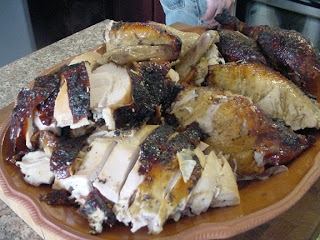 With all the food plated and ready to go we filled our plates buffet-style.  Conversation lulled while the first bites of turkey went down. 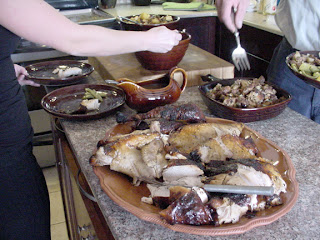 It was at this point we all looked at each other, free-range turkey virgins that we were, and declared it The-Best-Turkey-Ever!  I can only blame my increasingly intense food buzz for forgetting to take pictures of dessert.  All I know is that at some point my dinner plate disappeared and a dessert plate of apple pie and pumpkin mousse was slipped into it's place.  I'm not sure how, when, or by whom, but I never question good magic.  It was either Glenda, the good witch or my dear husband.

Whip remaining heavy cream and vanilla to soft peaks and fold into cooled pumpkin mixture. Pour into a serving dish and crumble the ginger snaps over top before serving.