Ya know, when you're gardening your mind tends to wander.  You think about all kinds of things and mostly that's good.  But sometimes there's places you just shouldn't go.  For Michael it was belting out KOHLRAAAABI!  OH-OH! to the tune of "Volare" when working in that bed.


because I was delighted to find that not only do I have a load of these growing,
but I seem to have a "Knack" for growing them. 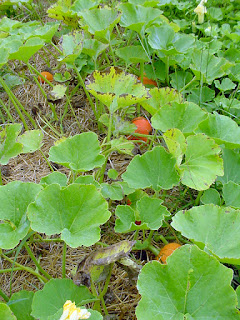 Now I'm stuck with an earworm from a not particularly shining era in the history of rock for at least the rest of the gardening year.

The Sunshine kabochas are growing in the house gardens along with Poblano peppers and Joe's Hot Round Peppers which I planted in my ongoing search for a Peppadew substitute.  I don't think this is what I'm looking for.  They're much too hot and a little too small.  But aren't they cute? 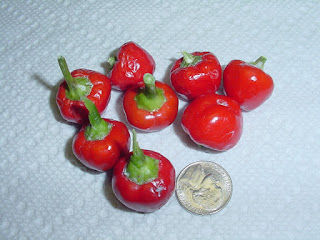 And they grow in bunches. 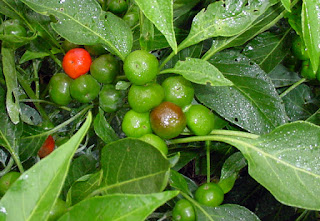 I'm going to have more than I know what to do with of these so I'll take them to market.  I have a feeling they'll be very popular just because they're a novelty.  Joe's Hot Rounds are an heirloom pepper from Italy and is the pepper formerly known as "Ammazzo" (please god, no more '80's earworms!).  If people like them as much as I think they will, I'll save seed and grow them again.


Also growing up here at the house are Pike muskmelons, 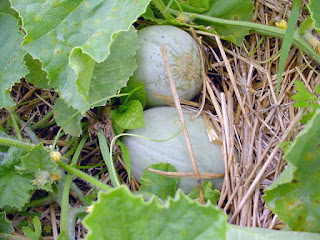 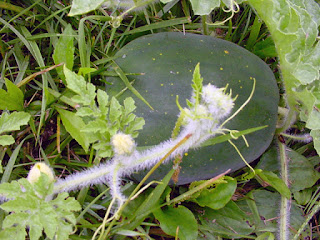 and Godiva pumpkins, which I'm growing for their hulless seeds. Get it? Godiva? Naked seeds? Heh, those crazy plant breeders and their wacky, risque senses of humor! 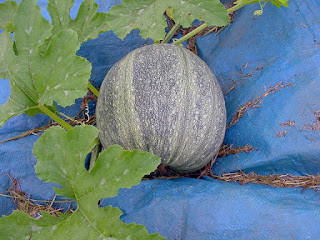 And did you know sweet potatoes did this? 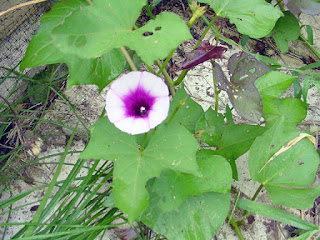 That's the bloom on a Beauregard sweet potato.  I suppose I should go pick it off but it sure is pretty.
Posted by Rebecca... at 12:21 PM